Nursing Careers at Newport Hospital: In Our Own Words 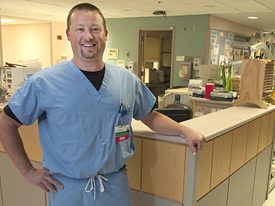 As Gabe Brunelli approached his thirties, he found himself reevaluating his career. A 15-year veteran of the transportation industry, Brunelli says, "I always liked helping people, and I got to do that in my job, but not enough. It was time for a change." Seeking greater job satisfaction and security, he decided to pursue a career in nursing.

Brunelli enrolled in the Community College of Rhode Island's nursing program, attending school nights and weekends while continuing to work days. During this time, he also got married and started a family. "Looking back, I'm not really sure how I did it," Brunelli laughs, "But I definitely had a lot more focus and ambition than I did in my twenties."

After completing his nursing degree in 2006, Brunelli began Newport Hospital's graduate nursing program, and says he knew right away that he was in a great environment. "I was impressed with how much tenure so many of the nurses had," he says. "Some of them had been at Newport 10, 15, even 30 years."

Brunelli's first three years of nursing were spent in Newport Hospital's float pool. Brunelli gained experience in almost all areas of the hospital, but mostly enjoyed the ED. "I found a good fit there. I like the quick pace," he says. Brunelli's colleagues began requesting him for their shifts, and he was offered an overnight full-time position in the ED in the spring of 2009. Brunelli says the 12-hour overnight shift works well with his family schedule.

"The skills I've learned on the job have been unbelievable," Brunelli says, describing how on a return flight from a Caribbean vacation in 2010, he assisted a fellow passenger who lost consciousness. "My emergency skills just kicked in."

Join us as we continue to provide the highest quality patient care in one of the most beautiful places imaginable.