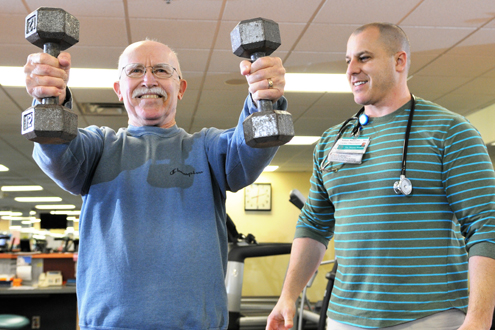 “They really brought me back to life,” says Earl, an octogenarian who brims with vitality.

“After a triple bypass and the good care of my doctors, and Lifespan’s Center for Cardiac Fitness, here I am, really enjoying my life with my wife.”

Earl speaks about his fitness routine with the same enthusiasm he shows for driving his zippy red sports car and for snapping digital photographs. A voracious reader, he says he’s consumed more than 900 books since his retirement from a career in chemistry.

More than 12 years ago, burning pain in his chest struck him as he walked with his son, spurring Earl to seek an examination. Between a sedentary job that had kept him desk-bound and a family history of heart disease, Earl wasn’t surprised to learn that he had angina.

When treatment with nitroglycerine didn’t work, Earl had tests that uncovered major problems. A cardiac catheterization revealed that Earl had significant blockages in his coronary arteries. A few days later, he underwent triple bypass surgery.

A 12-week cardiac rehabilitation program at the Center for Cardiac Fitness followed Earl’s recovery from surgery. Like other patients, he learned how exercise, proper nutrition and stress management can reduce their chances of suffering another cardiac event.

Deciding to build on the gains he had made, Earl joined the cardiac maintenance program at the center. He became a devoted exerciser, and is a role model for others at the Cardiovascular Institute’s center who are making strides to improve their heart health.

He and his wife, Kris, exercise twice a week at the center on Collyer Street in Providence, circling the track side by side, and then parting to do their personalized fitness routines. After 60 years of marriage, this partnership comes naturally to them.

Earl advises others who have had a cardiac event to “make sure you have a good doctor, make sure you do what they say, and don’t get discouraged. You can get better. Take their advice, which will include exercise. It’ll just prolong your life immeasurably and make it better.”