A Weight Loss Journey Adds Up to Healthier Living 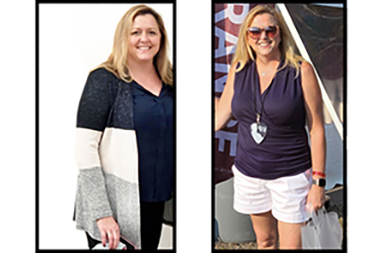 You might say that Lee Anne Clift is a numbers person. Throughout her 26-year career with Lifespan, she’s been on the finance end of operations, beginning in the budget office and working her way to her current post of two years as Manager of Finance for Gateway Health. “I love math,” she emphasized. “When numbers agree, it’s awesome.”

Last January, her numbers were adding up in the wrong direction. “It was just after the pandemic started, and everyone was talking about the COVID-19,” she recalled. “I had definitely participated in that.”

Clift had heard about the Center for Weight and Wellness and was on the fence about participating. Until she received some surprising bloodwork results indicating she was prediabetic and had high cholesterol and glucose counts.

“I said to myself, I don’t want to be unhealthy. My knees were hurting. I needed to get healthy.”

Read about how Lee Anne Clift worked out her numbers 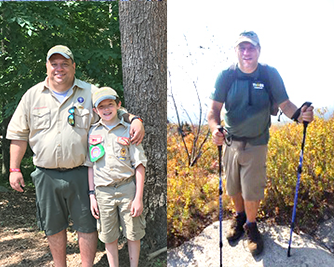 After a Nearly 100-Pound Weight Loss, He’s On Top of the World

Carl Rodrigues had struggled with his weight for years. Since his high school football days, the pounds accumulated year after year. “I was heavy for a long time. This didn’t happen overnight.”

Rodrigues began following the Center for Weight and Wellness plan just after Presidents Day in February 2020. Within a month after he began his weight loss journey, the COVID-19 lockdown brought in-person visits and support groups to a halt.

Then it was time for him to help lead his son's scout troop to Mount Monadnock in New Hampshire.

In Addition to a 40-Years-Plus Friendship, They Shared a Problem

Both men consider themselves disciplined, but they appreciate the benefits of the support at the Center for Weight and Wellness.

With that support Moretti lost 45 pounds, and Peretti dropped 40.

They began the program after the COVID-19 shutdown. The two benefitted from telehealth and Zoom conferences, with weekly phone check-ins with the clinicians.

“There’s no magic to it,” says Peretti. “You really have to incorporate it into a lifestyle, with some degree of sacrifice and behavior change. But the program makes it a very obtainable goal with results that you can see."

Moretti said he likes to tell others about the Center for Weight and Wellness because “They’re genuinely nice people. It’s always positive, you’re always losing weight. "

Read how the two Steven and Robert lost their weight

Recently retired  North Providence firefighter Mike DeResta has had issues with weight management throughout his life. During his many years as a firefighter, he struggled with high blood pressure and had trouble climbing stairs without becoming winded. In 2017, Mike saw a picture of himself that motivated him to begin his journey to health and weight loss. He had tried several diets in the past, but they didn’t work for him in the long term. When he discovered the Center for Weight and Wellness through a friend who had lost 30 pounds through one of the programs, he signed up for the Modified Fast Program. 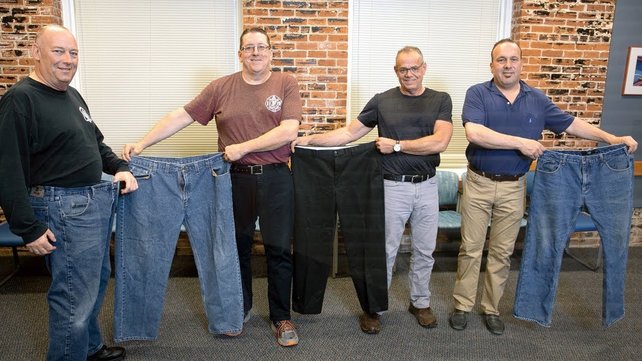 Mike DeResta outlines his journey to a new, healthy self.

Mike became an active participant in the 22-week program and now frequently attends group support meetings in the Masters Program. He’s lost 80 pounds since following the Center for Weight and Wellness’s diet and exercise regimen. Mike says that the difference lies in the education you receive as a participant. “On this diet, losing the weight is the easy part; the success of the diet comes from the tools and education you receive from the Center for Weight and Wellness. You apply those, and your life will be changed forever.” Mike exercises frequently with his personal trainer and now looks forward to working out. His blood pressure levels are back to normal and he no longer needs a sleep apnea machine. After he lost the weight, Mike even passed younger firefighters up the stairs. Mike’s journey to weight loss has inspired several of his colleagues to follow in his footsteps. The group is well on their way through the Center for Weight and Wellness programs and support each other each step of the way. 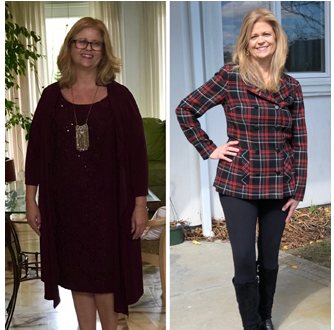 When Lee-Ann Fonseca found herself wearing a size 20 for the first time in her life, she knew she needed to make a change. The weight loss programs she’d tried before wouldn’t be enough.

Over the years, her weight gain increased and she began feeling the physical consequences – knee pain, shortness of breath, headaches, high blood pressure. It was becoming difficult to do daily tasks like carrying groceries or climbing stairs.

She can now share new adventures with her family – they recently took a vacation to Spain and Portugal, where Lee-Ann did tons of walking and sightseeing without ever feeling short of breath or needing to sit down.

Learn more about the services at Lifespan Weight and Wellness