When Lee-Ann Fonseca found herself wearing a size 20 for the first time in her life, she knew she needed to make a change. The weight loss programs she’d tried before wouldn’t be enough – they were too unsustainable with their weighing and measuring each meal, and they only focused on shedding the pounds quickly. Rather, Fonseca had to get to the root of her issues with food. With her two daughters heading off to college, leaving her and her husband at home, Fonseca felt she was at a crossroads. 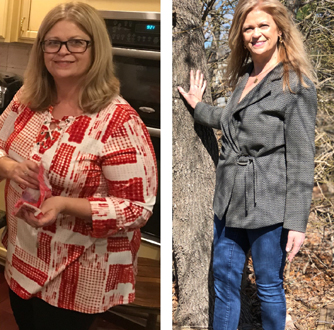 “I needed to redefine myself,” Fonseca said, “and I wasn’t sure what myself was. I started to think about what do I want to be and how do I want to live the rest of my life.”

A Lifespan employee for 20 years, now working in the corporate compliance department, Fonseca was used to a desk job and a more sedentary lifestyle.

And over the years, her weight gain increased and she began feeling the physical consequences – knee pain, shortness of breath, headaches, high blood pressure. It was becoming difficult to do daily tasks like carrying groceries or climbing stairs. The turning point came for Fonseca when her sister was diagnosed with cancer.

“It was an eye-opener,” said Fonseca. “I felt I also had an illness, but with symptoms that I could fix myself, unlike cancer. This was controllable and I just needed to focus on it.”

Taking Charge of Her Health

In January 2018, Fonseca contacted the Center for Weight and Wellness. She started the modified fast program, which had a daily diet plan of three meal replacement shakes or bars and one meal of solid food, with a goal of two to four pounds of weight loss each week.

“The program was so do-able,” Fonseca said. “With other programs I tried, I felt like I was sacrificing constantly. With this program I was faithfully losing two pounds a week.”

Fonseca now finds herself able to do things she never dreamed of doing before.

The people at the Center for Weight and Wellness made a big difference in creating an environment in which accountability to the program and sustainability of weight loss were possible.

“The people were awesome,” said Fonseca. “The girls who take your weight and blood pressure each week would be very encouraging. They were very inviting to make you want to return.” 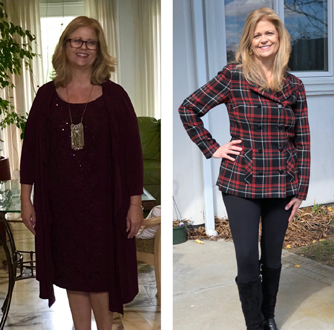 Fonseca even began to incorporate exercise into her new lifestyle – something she’d previously never enjoyed. She began attending yoga classes through Working Healthy every Wednesday evening. At first it was difficult to move her body in ways she wasn’t used to. But she stuck with it, increasing her classes to two times a week and feeling herself becoming stronger.

“I learned that I like it,” Fonseca said. “And I had never, ever liked exercise before.”

Fonseca had never connected to her body in this way before – not only physically, but spiritually and mentally as well.

“It was one hour of total self-care,” she added. “And I think that’s what was so important.”

Perhaps most importantly, Fonseca began attending support groups at the Center for Weight and Wellness that helped her evaluate her relationship with food and get to the root of why she gained the weight in the first place. She began to ask herself not what does she eat, but why does she eat? She started with Keep on Track – a group that helps patients refocus on their goals and learn to enhance motivation and confidence – and has now moved on to the Masters Program, which is a weight maintenance group that helps patients keep the weight they’ve lost off.

“When you gain larger amounts of weight, there’s something going on,” Fonseca said. “Going to the meetings every week, I began to think and this was the first time I identified that when things in my life were out of control, I began to eat because that I could control.”

“That was my self-care,” she added. “I feel like yoga mimicked that self-care and control – in a much healthier way.”

Now that she has learned why she eats, she can identify when she is falling into those old habits, stop them before they become an issue, and evaluate why she was falling back.

“That’s the major difference from any other weight loss program I’ve ever done before,” Fonseca said.

Fonseca faithfully stuck with the program and followed the guidelines exactly and, just as the program promised, each month, she felt more and more weight come off. By November of 2018, Fonseca lost 70 pounds and surpassed her goal of being a size 12, dropping to a size 8.

“At the Center for Weight and Wellness, if you apply the diet, there’s no way you cannot lose weight. It’s almost foolproof,” Fonseca said. “Stick to it and there’s no way it doesn’t work.”

With the weight shed and understanding the habits that led to her gaining so much weight, Fonseca now finds herself able to do things she never dreamed of doing before.

“I just started a boxing class and I said to my husband, ‘One year ago, I could never have done this,’” said Fonseca. “I went ziplining. When I was heavier, I never would have done that.”

She can now share new adventures with her family – they recently took a vacation to Spain and Portugal, where Fonseca did tons of walking and sightseeing without ever feeling short of breath or needing to sit down. Having reached her goal size, Fonseca is now exploring an interest she’s always had in fashion – to the delight of her two daughters.

“I always loved fashion, but when I was overweight, I literally had a uniform, just whatever fit. My daughters and I can now borrow each other’s clothing! We have tripled our wardrobes!” she said, laughing.

The support from her family and friends was vital in inspiring Fonseca to improve her health, and now, to maintain her weight loss. Her husband’s continuous love and positivity was particularly impactful. She recalls looking through old pictures of herself at a heavier weight.

“In every single picture, my husband had his arm around me,” Fonseca said. “Even then, it was just love.”

Fonseca is now returning that support and encouragement to others, inspiring a friend to contact the Center for Weight and Wellness to begin her own weight loss journey and bringing her sister to attend her first ever yoga class.

With the help of the Center for Weight and Wellness, Fonseca truly did redefine herself and achieve the life she wanted to live.

“Now I’m exactly where I want to be physically and mentally,” said Fonseca. “I feel good about myself. I’ve got a lot of living to do.”