One March day in 2016, Faith Helm, then 49, took a long morning run as part of her training regimen for an upcoming Boston Marathon. Then she was off to work at the University of Rhode Island’s RI Geriatric Education Center where she is a program manager.

As she prepared for a meeting, Helm suddenly felt dizzy and disoriented, and soon felt a brief paralysis. Something was very wrong. She got through her meeting, but noticed immediately that her face was drooping.

She went to her local hospital and was immediately transferred to Rhode Island Hospital, the state’s only Comprehensive Stroke Center, part of the Norman Prince Neurosciences Institute. There, Helm met Ryan McTaggart, MD, a brain aneurysm expert and director of interventional neuroradiology.

Dr. McTaggart recommended “flow diversion,” a procedure which would divert blood flow away from the aneurysms, essentially bridging the normal portions of the vessel before and beyond to bypass the weakened and bulging wall. Given the complexity and the two different areas of the brain to be addressed, she would need two surgeries.

Dr. McTaggart put her on anti-platelet therapy – a medication regimen to minimize her risk – and scheduled surgery.

Helm says Dr. McTaggart explained everything thoroughly, answered all of her questions, drew diagrams, and gave her every confidence in the procedure.

“You think about brain surgery, and wonder how you’ll come out of it. As a mom of a 12-year-old, it petrified me. She was so brave, it was amazing. But I worried for her, and for my husband,” says Helm. 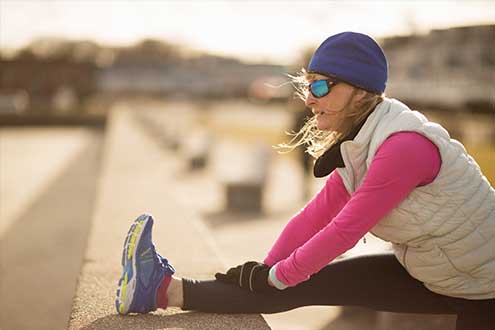 She found guided meditation helpful in the days leading up to her surgery. Sitting on the beach, one of her favorite places to be, she’d focus on positive thoughts of people, places and things, and try to visualize herself in the future, back on the beach, healthy and recovered.

“I normally would have run to relieve stress, but I couldn’t, so this was another outlet for me,” she explains.

Helm’s surgeries were a success and the recovery went as smoothly as she could have hoped. She was eager to get back to her active lifestyle, but followed doctor’s orders and went slowly and steadily, checking in frequently with Dr. McTaggart to report progress and to review any concerns. She was back to work part time about two months following surgery and eased into her full-time role.

Helm began walking a quarter-mile loop several weeks after surgery, building up gradually until she could walk about two miles at three months.

Six months into recovery, she underwent an angiogram, an X-ray procedure, and her results showed great progress. She was given the clearance to run again. She kept her distances shorter and pace slower, but was happy to be back to it. In July of 2018, she ran the 10-mile Blessing of the Fleet in Narragansett, a long-time favorite of hers. Meanwhile, she has her eye on a third Boston Marathon in 2019.

Since her diagnosis, several close family members have undergone baseline MRIs for reassurance that everything that is normal, since Helm’s mother suffered a brain bleed in her 40s. Fortunately, all was well, and they’ll continue to be monitored, armed with more knowledge.

“I expect her to have wonderful vascular health going forward,” he says. “I’m just so pleased that we were able to bridge her to this point in her life.”

Helm is happy to have reclaimed her life, which she credits to Rhode Island Hospital, from the surgeries to survivorship group support.

“Dr. McTaggart and the whole neurovascular team were fantastic,” she says. “They took the time to know me, to personalize my care, and to make sure that I got the best result possible.”