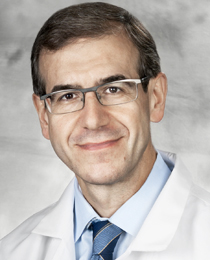 Mylonakis leads the infectious disease division at both Rhode Island and The Miriam hospitals and oversee one of the hospitals' largest research divisions, with major initiatives under way in HIV/AIDS, viral hepatitis, hospital-acquired infections, tuberculosis, substance use and prisoner health.

A graduate of the National University of Athens in Greece, where he received both his medical degree and PhD, Mylonakis fulfilled his internship and residency in internal medicine at The Miriam Hospital, where he also served as chief resident. He then completed a fellowship in infectious diseases as Massachusetts General Hospital.

Mylonakis is internationally recognized for his research on the study of host and  microbial factors of infection and the discovery of antimicrobial agents, or substances that kill or inhibit the growth of microorganisms such as bacteria or fungi. His research has received support from the National Institutes of Health and the Ellison Medical Foundation and he has published more than 160 peer-reviewed scientific articles and book chapters. Mylonakis, who has edited five books on infectious diseases, is also the founding editor-in-chief of Virulence, an international peer-reviewed journal that focuses on microbial infections and host-pathogen interactions.

Mylonakis is also a professor of medicine at The Warren Alpert Medical School of Brown University.