Physical Therapy Helps Surfer Get Back on the Board 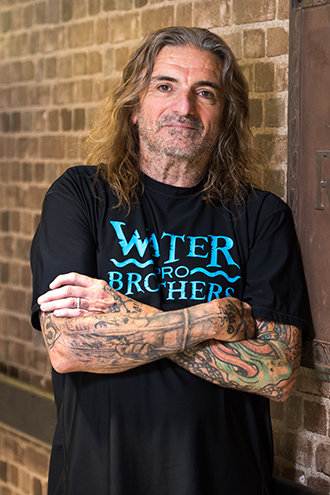 It’s a mantra you’ve probably heard before, a phrase to encourage ourselves to bounce back and try again after facing some certain difficulty. But for Sid Abbruzzi, this mantra was very literal.

Abbruzzi has been a fixture of the surfing and skating scene in New England since the ’60s, opening the beloved Waterbrothers surf shop in Newport. However, while Sid saw his share of bumps and bruises, the years of his high-octane hobbies began to wear down on him somewhere below the surface. A trip to the doctor told him that he had no cartilage left in his right hip and he needed a hip replacement.

“I was skateboarding and falling on my hip, surfing, running marathons. I had no cartilage left,” Abbruzzi said. “It was a no-brainer to operate.”

After a successful hip replacement surgery, however, Abbruzzi still had a long road ahead of him. One of the most vital components of a successful joint replacement surgery is rehabilitation. Rehabilitation is necessary to restore normal movement in the joint, strengthen the joint and surrounding muscles, and help you get back to normal activities. In other words, it was necessary for getting Abbruzzi back on the board. That’s why he chose the Vanderbilt Rehabilitation Center at Newport Hospital.

“There was no question to go anywhere else,” Abbruzzi said. “I could go right down the street and I’d heard good things about it.”

“I’ve been to other rehab centers and they were like production companies – just moving people in and out,” Abbruzzi said. “At Vanderbilt, they know how to treat people. They learn each person’s goal and help them reach those goals. There was no doubt I was going to Vanderbilt.” 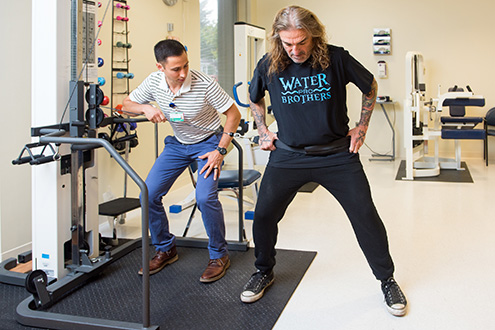 At Vanderbilt, Abbruzzi used his past surfing experience and competitive spirit to stay motivated and push himself through each physical therapy session.

“I’ve always been motivated at a performance level,” Abbruzzi said. “I always want to be better, be motivated to do better than the last time.”

And it certainly showed in his recovery. Doctors at Vanderbilt told Abbruzzi that he was consistently ahead of schedule and ahead of where most patients would be at that stage. He had no need for a cane or walker during his recovery.

“This is the first time I’ve gone into the hospital for improvement, not just for an accident,” Abbruzzi added. He had been used to a quick turnaround and short stint with physical therapy after previous injuries. But at Vanderbilt, he received more focused care, with the goal of ensuring his long-term success. And while he is continuing his rehabilitation, he has a lot to look forward to.

“I’m going to be running a pro event in (a few months),” Abbruzzi said. “I work in an active business so I have to be travelling, running events, staying on my feet a lot.”

Luckily, Abbruzzi chose a rehabilitation center that works with patients one-on-one, provides individualized assessment and attention, and helps patients get back to what they do best.

“I’ve been to other rehab centers and they were like production companies – just moving people in and out,” Abbruzzi said. “At Vanderbilt, they know how to treat people. They learn each person’s goal and help them reach those goals. There was no doubt I was going to Vanderbilt.”