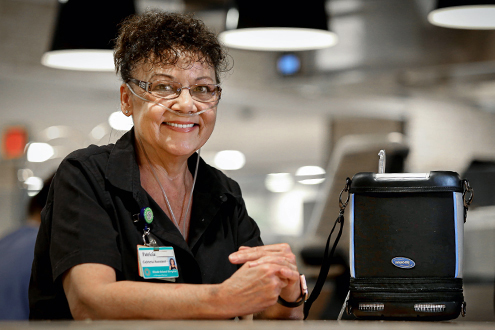 Patricia Hartmann of Providence, RI now feels like she’s got room to spread her wings. A longtime Lifespan employee who has chronic obstructive pulmonary disease (COPD), Hartmann got a portable oxygen concentrator from Lifespan Home Medical in June 2019. Now she can relax at the beach or browse the stores at the mall without worries.

“This device has given me so much more freedom than the traditional oxygen tanks. The regular tank has to be refilled every four hours, which means you can’t go too far, because you have to go home to refill it,” Hartmann said. “I couldn’t go anywhere because I was too nervous about running out of oxygen.”

Hartmann has worked in the Rhode Island Hospital cafeteria for 13 years, the last several as a cashier. About three years ago, she found she was “having to sit down all the time and catch my breath. I used to struggle all the time.” After receiving a diagnosis of COPD, a chronic lung disease that makes it hard to breathe, Hartmann called Lifespan Home Medical to get oxygen equipment.

“There’s nothing better than having the freedom to go places without worrying about running out of oxygen.”

Before getting the portable concentrator, she relied on traditional portable tanks for three years. A portable oxygen concentrator draws oxygen from the air. It takes in air, removes most of the nitrogen and any impurities, compresses the resulting oxygen, and delivers it to the patient.

The portable concentrator Hartmann uses has a battery that is recharged by plugging the machine into an electrical outlet. “It comes with a car charger and an extra strap so you can wear it on your shoulder or wear it like a backpack, which makes it even better,” she said. “Thanks to the portable oxygen concentrator, I’m able to take my granddaughters to Disney World this Christmas,” Hartmann said with a big smile. “There’s nothing better than having the freedom to go places without worrying about running out of oxygen.”