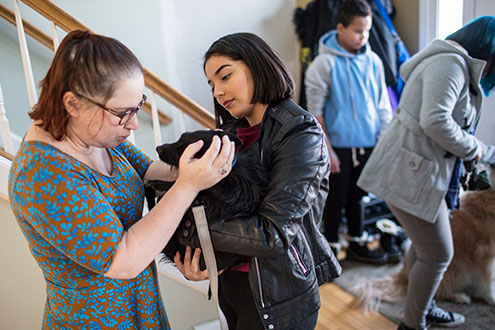 Jess’s young life was fraught with neglect and abuse at the hands of biological relatives charged with her care. For years, she and her two sisters bounced from home to home and between one unreliable relative to the next. Finally, when Jess was eight years old, Jen O’Connor and Steve Koehler adopted the girls and vowed to raise them in a loving and nurturing home. This marked the beginning of a new life for Jess, but the trauma of her past undoubtedly caused anxiety and other mental health struggles along the way.

“In the beginning, Jess was very reserved and quiet. For a while she wanted to have her adopted mom in the sessions before she was comfortable sharing on her own.”

Shortly after the adoption, Jess began therapy at Bradley Hospital. Her psychologist, Kerri Kim, PhD, recalls how the beginning stages of Jess’s therapy were a world away from where she is now. “In the beginning, Jess was very reserved and quiet. For a while she wanted to have her adopted mom in the sessions before she was comfortable sharing on her own.”

Sure enough, Dr. Kim helped Jess work through her feelings of the adoption, her upbringing and her biological family. Jess soon began to own her feelings instead of pushing them away; Jess and Dr. Kim explored her past abuse and learned healthy coping mechanisms to manage the distress and move forward. She learned how to actively communicate and how to prioritize herself and her well-being—something she was putting on the back burner in the past, in favor of others’ happiness.

After a year and a half of outpatient therapy with Dr. Kim, the pair felt Jess was doing well enough to stop regular sessions; while she returned to Dr. Kim’s care in 2016 to cope with other family stressors, it was not until 2017 that bullying by peers led to a serious suicide attempt. At that point, Jess increased her treatment at Bradley by joining the Mindful Teen Dialectical Behavior Therapy for Adolescents (DBT-A) program. This program is designed for teens who exhibit signs of suicidality, non-suicidal self-injury or other self-destructive behaviors. Patients typically enter the six-month, evidence-based program after remaining symptomatic and unsafe despite receiving more intensive services, such as inpatient psychiatric treatment as Jess did. The program provides individual therapy, family therapy sessions as needed, 24-hour access to phone coaching for both adolescents and their caregivers, and a weekly DBT-A multi-family skills group. It was because of the multi-family skills group that Jess worked tirelessly to effectively communicate with her parents; the program helped her feel safe again to open up about her feelings, instead of burying them down deep like she was all too used to doing before.

“She advocates for herself now. And she balances her own needs while also recognizing and respecting the needs of her family.” 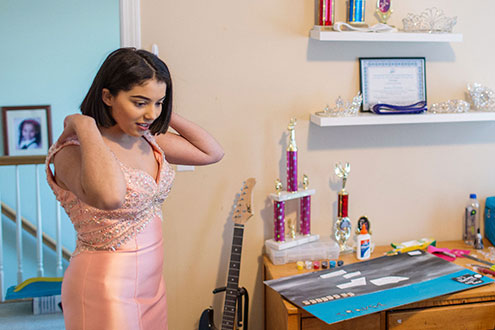 Jess continues to partner with Dr. Kim on creating and maintaining a life that is worth living. Dr. Kim has noticed a significant change in Jess since the beginning of their sessions in 2013, “She advocates for herself now. And she balances her own needs while also recognizing and respecting the needs of her family.” The O’Connor/Koehlers now have four adopted children and are fostering another child.

Recently, Jess started participating in beauty pageants and has found a community in which she feels comfortable. She enjoys art and singing, and takes advantage of the after-school programs and scholarships the pageant circuit offers. Jess wants to share her knowledge with others who may be struggling with similar issues, “Don’t be afraid to talk to someone! And never feel bad about how you feel.”