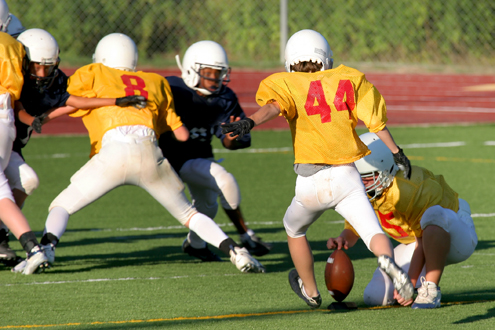 Two prominent researchers at Lifespan from very different fields – orthopedics and hematology – are collaborating to investigate concussion, a brain injury that is often considered solely the domain of neurology.

J.J. “Trey” Crisco, PhD, associate director of the Center of Biomedical Research Excellence for Skeletal Health and Repair at Rhode Island Hospital, is known for his expertise in biomechanics, sports safety, and related athletic equipment. Peter Quesenberry, MD, director of hematology/oncology research at Rhode Island and The Miriam hospitals, is renowned for his stem cell research.

These scientists have been striving to better understand concussions – an injury that affects millions of Americans annually and can have a lifelong impact on patients, including increasing the risk of diseases such as dementia, Parkinson’s or Alzheimer’s.

Americans sustain about 3.8 million sports- and recreation-related concussions annually, according to the Centers for Disease Control. High school athletes, whose developing brains are more vulnerable to injury, are particularly at risk.

Although sports-related concussions are far too common, it isn’t clear what degree of impact causes a concussion, the consequences of concussions received when the brain is still developing, and the long-term effect of multiple concussions over a lifetime.

Dr. Crisco has been on the forefront of studying athletes’ concussions to help design more effective protective gear and to improve rules to prevent or reduce the brain injuries.

Dr. Quesenberry and his team are pursuing studies of vesicles – membrane-enclosed sacs within cells – in saliva. He realized that the vesicles, which can serve as biomedical indicators of the neuroinflammatory process, might be helpful in diagnosing and treating concussions.

Dr. Crisco has done extensive work developing head-impact recording technology and researching concussions in college football players, including those at Dartmouth College, Virginia Tech and Brown University. The study, supported by the National Institutes of Health, used protective helmets equipped with accelerometers, like those used in automobile air bags, to measure head impacts during practice and games.

“This research is being used by many institutions. For example, Ivy League schools with football programs have already changed the rules,” Dr. Crisco said. “They now have ‘no contact practices’ to limit exposure. New helmet performance testing, using a five-star rating system, has been instituted by looking at where concussions were occurring.”

There still is much work to be done. “Currently, we can’t adequately prevent concussions with helmets, because we don’t have enough data to develop design standards – yet,” Dr. Crisco said.

Dr. Crisco also launched a study that used the sensor-equipped helmets for Pop Warner football players (children age 9 to 12) since there is virtually no data on head injuries in that age group.

They studied two teams in Barrington, Rhode Island, and two teams each in communities near Wake Forest University in Illinois and Virginia Tech.

The ability to obtain data from individuals before and immediately following a measurable hit captured Dr. Quesenberry’s attention. His team joined Dr. Crisco on the sidelines and measured the level of neuroinflammatory markers in the saliva of players before and after the game and after any hits to the head.

“We know that vesicles increase in cerebral spinal fluid during a brain injury. So, we thought, ‘Let’s see if vesicles could be a biomarker for sub-concussion head injury.’ Since we know it shows up in saliva, we wanted to test that alongside the helmet sensor research.”

Dr. Quesenberry’s team looked at three classes of subjects: high school and Brown University football players; head trauma patients in the Rhode Island Hospital Emergency Department; and patients in the chronic concussion clinic. They measured the levels before and after games, monitored hits and found that all the players showed an increase in the inflammatory markers.

Among the ED patients, they identified markers in 15, only one of whom was suspected of having a concussion. The clinic provides an opportunity to follow concussion patients over the long-term.

Most previous research has concentrated on severe head injuries and concussions, but Dr. Quesenberry’s team identified neuroinflammatory markers in patients whose other symptoms did not warrant the diagnosis of concussion.

Through their collaboration, both research teams hope to improve prevention, diagnosis and treatment of concussions. Athletes – including participants in cheer-leading, hockey, lacrosse, soccer, wrestling, and mixed martial arts – suffer many blows to the head during a season or throughout a career. The majority are not severe, but research indicates there is a cumulative effect.

These “minor” concussions are difficult to diagnose, so patients may continue to play or participate in daily activities without receiving appropriate treatment.

Dr. Quesenberry’s team also is using the biomarker testing in a study with mixed martial arts (MMA) participants. “We measure biomarkers in MMA participants before and after a match to see if they are elevated. We are finding MMA fighters who have been cleared by a doctor and who had not had a significant hit but still had high markers. Some are probably already at the chronic stage,” he said.

This research has broad implications for individuals besides athletes, Dr. Quesenberry noted, including military personnel and motorists. The team is exploring whether multiple findings of the markers may be an indicator of underlying Alzheimer’s or Parkinson’s disease, or of amyotrophic lateral sclerosis (ALS).

“This has very real applications. It can help in screening individuals who shouldn’t be participating in contact sports to prevent them from developing a problem later in life. It also has potential for discovering interventions to reverse Alzheimer’s by repairing the damaged cells,” Dr. Quesenberry said. “We have a company interested in this research and, with the hospital’s support, we are working on obtaining a patent and a small business development grant to move forward.”

Learn more about Lifespan research for hematology and orthopedics »