"Hope Is My Mantra" 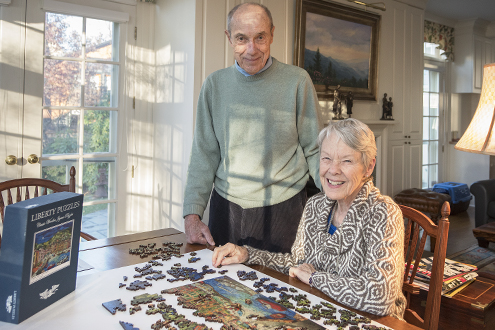 Despite her Alzheimer’s diagnosis, study participant emphasizes positivity and the importance of research

Several years ago, Nancy Curran of Newport began to notice problems with her memory.

There she participated in a study of a new brain imaging approach that uses a PET scan. Afterward, Dr. Ott gave Curran the diagnosis: She had a buildup of amyloid protein in her brain, a visible marker of Alzheimer’s disease.

Her first question, Curran said, was “Is there any research?”

A retired occupational therapist and daughter of a physician, Curran explained that the practice of medicine has been a constant theme in her life, and she values research highly.

Dr. Ott is a national leader in memory disorder research and principal investigator for numerous clinical trials and studies currently underway at the center. Curran, with her husband, Mike, as her study partner, proved to be a good candidate for the Stage 3 trial of a drug called aducanumab. Each monthly visit to Rhode Island Hospital requires three to four hours, including the hour-long intravenous infusion of aducanumab.

“The preliminary but promising success of aducanumab might be due to its ability to target amyloid collections called fibrils. While dense amyloid plaques are a visual hallmark of Alzheimer’s disease, these smaller collections of amyloid are also present in the Alzheimer brain and may represent the most toxic form of the protein,” Dr. Ott said.

Biogen, a biotechnology company based in Cambridge, Massachusetts, is sponsoring the EMERGE study, as well as its sister study ENGAGE, which are both large-scale Phase 3 clinical trials.

The Currans have high praise not for just Dr. Ott and co-investigator Lori Daiello, PharmD, ScM, but “the nurses who have been so kind and supportive.”

“Even three years ago, there wouldn’t be anything to help me. I feel if everyone participated in research, we’d be a lot further along," said Nancy Curran.

Married 56 years, the Currans share the easy give-and-take of long-wed spouses. When his wife falters on a recollection, Mike Curran gently supplies an answer.

“Nancy has such a great memory for older things, but today or the day before is the problem,” he said.

The couple, who lived in Hartford for 50 years, relocated to Newport eight years ago.

Both have been hospice volunteers in Hartford and Newport, and Nancy Curran, who studied massage therapy after retiring, also gave reflexology massages as a volunteer at Newport Hospital and for Women and Infants Hospital in Middletown. “I think touch is the most valuable connection we have,” she said.

Nancy Curran, 77, wears a bracelet of purple beads – the color of Alzheimer’s awareness – linked with a silver medallion etched with the word “hope.” A dot of gold on the medallion represents her loving caregiver, her husband.

“This bracelet says it all,” she said. “Hope is my mantra.”

Her willingness to talk about her Alzheimer’s disease sets his wife apart, Mike Curran pointed out. Fear and shame keep many people from sharing their diagnosis, he observed.

On the contrary, Nancy Curran said, “I want to scream it from the mountaintops and tell everyone there is hope!"

“Even three years ago, there wouldn’t be anything to help me. I feel if everyone participated in research, we’d be a lot further along.”