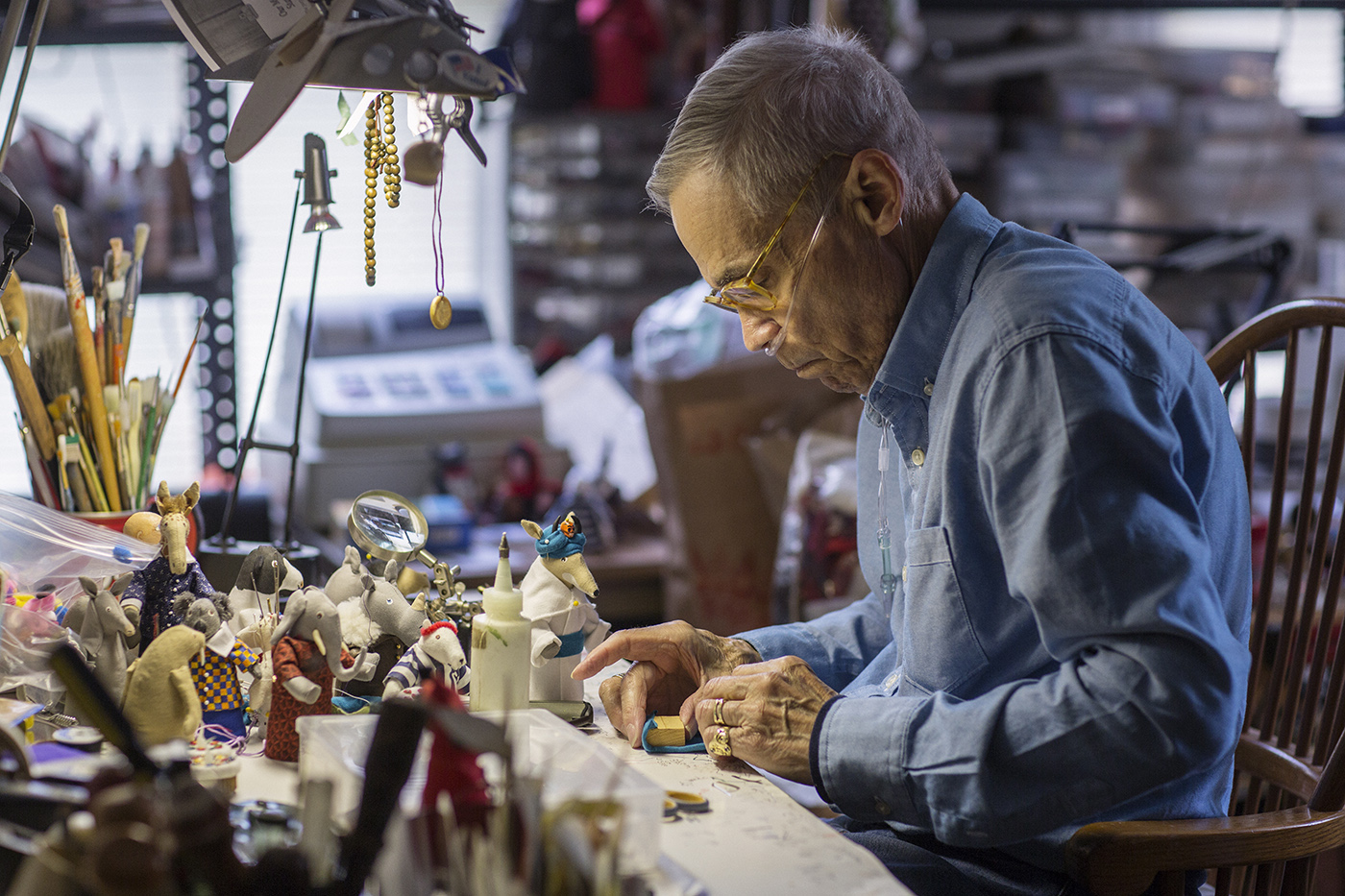 Rick Devin has a special way of describing his art.

“I have two big words for it” he says, laughing. “I call it anthropomorphic surrealism.”

It is precisely this unique ability to see art in the objects – and animals – around us, and to find the humor in the realism of life that helped Rick through his fight against cancer.

Rick has lived in Rhode Island for 32 years, but been an artist for 48 years. Now 72 years old, he lives in Hope Valley with his recently retired wife, near the gallery where he sells his art and devinicals, and has two grown children. There’s another number he adds to this list.

“As of October, I’ve been a cancer survivor for nine years,” Rick says.

Rick isn’t sure how long the cancer was growing in his body. The symptoms came on suddenly and strongly. One weekend in 2009, while taking one of his usual hikes in the woods with his wife, Rick found that he couldn’t catch his breath. Suddenly, he began coughing up blood.

His wife rushed him to the emergency room, where he had x-rays of his chest.

“The ER doctor was pacing up and down the hallway like he didn’t know how to tell me,” Rick said.

The doctor had seen what he thought could be cancer, what looked like a tumor in the right lower lobe of his lung. Rick saw a pulmonologist who performed a biopsy and gave the diagnosis. Rick had stage 3 lung cancer.

“I was speechless when I heard,” Rick said. “From everything I’d read, I thought no one makes it more than a couple years. But I had so much more stuff to do.” 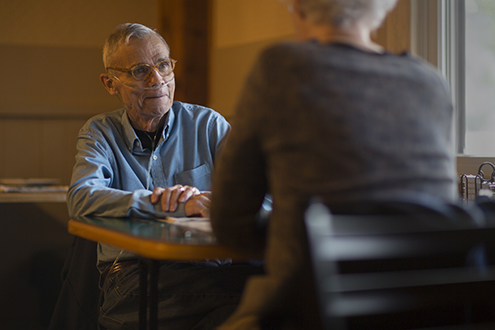 Thinking of his family, Rick began getting his affairs in order, cleaning up and organizing the studio where he creates his art so it wouldn’t be too much for his wife or sons to go through.

"Everyone there was all so phenomenal, so wonderful to me, I almost looked forward to it."

“I didn’t want to drive all the way to Boston for every appointment. We put around 26,000 miles on the car going back and forth to my appointments,” Rick said. “Imagine if I was driving to Boston each time!” his humor and wit once again shining through.

Throughout the summer of 2009, Rick received chemotherapy and radiation at the Lifespan Cancer Institute, spending hours around the physicians and staff of the hospital. Thomas DiPetrillo, MD, clinical director of radiation oncology, provided the treatments.

“I wouldn’t say I loved the appointments, but everyone there was all so phenomenal, so wonderful to me, I almost looked forward to it,” Rick said.

By September, the tumor in Rick’s lung had shrunk enough that surgery to remove it would be possible. At the end of the month, Thomas Ng, MD, the director of the division of thoracic surgery, performed the operation to successfully remove the tumor.

“He was so great. He explained exactly what the surgery would be like and what he would do,” said Rick. “And after the surgery, he was there twice a day to check on me.”

Rick began a steady, but difficult, recovery. The support from his family and medical team helped him persevere through his recovery, a time that can leave one feeling isolated and overwhelmed.

“I didn’t have a lot of visitors during that time,” said Rick. “It’s hard for people to confront the idea of someone they know possibly having a terminal illness.”

However, just as Rick’s art can highlight the whimsical and surreal aspects of life, sometimes life reveals those aspects on its own. Rick recalls how in the midst of recovery he received a surprising gift in the mail. A woman with whom he’d attended high school back in his home state of Pennsylvania had somehow heard he was in the hospital, recovering from cancer, and decided to reach out.

“Every three days I got another handmade card in the mail from her,” Rick said, still sounding a bit incredulous. “I was hearing from people from my high school who I didn’t even know well!”

"I think after the cancer, my art may have become more prolific."

Rick eventually recovered from surgery, his CT scans looking better each day, and was discharged back home. As of now, he still sees Ariel Birnbaum, MD, a medical oncologist at the Thoracic Multidisciplinary Clinic, for follow-ups. But Rick is, above all, happy to be cancer-free.

And his art still reflects his singular view of life, each new “devinical” serving as an extension of his thoughts and feelings in visual form.

“I think after the cancer, my art may have become more prolific,” Rick said. “I have lists of all the things I want to do. It’s just a matter of finding the time and energy.”

When asked what he would want to say to someone going through a similar diagnosis or treatment, Rick had one very definitive piece of advice.

While he was in the hospital, Rick had been posting newsletters online, updating his friends and family about his ongoing treatment and often including a selfie to let everyone know he was still smiling, still keeping his typical humor and heart. The great responses he received kept him continually updating. And, in turn, it made him feel better to be sharing his story.

“I had people seeing my newsletters and posts and asking if they could share them, because they knew someone else going through the same thing,” said Rick. “I would always say, ‘please do.’ The best thing I could do was share my story with someone.”

Learn more about the Thoracic Multidisciplinary Clinic at Lifespan