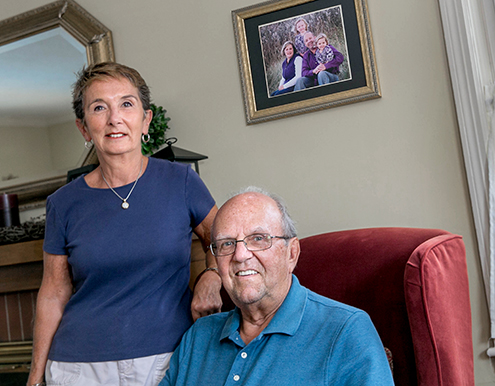 Taking a "Bridge to Transplant" Restores His Health

“I call it my miracle kidney stone,” says Jack Bailey.

In August 2015, the East Providence man was spending the night at a friend’s home in Wareham, Massachusetts, when he awoke “with tremendous pain in my back.”

After tests at a nearby community hospital, Mr. Bailey was treated for a kidney stone. But the diagnostic scan he had had also revealed something more ominous: a suspect spot on his liver.

It was the beginning of a medical odyssey that would take Mr. Bailey from Providence to Miami and back by means of a new kind of “bridge.”

Mr. Bailey had known for years that he had nonalcoholic fatty liver disease but was told not to worry about it. The Vietnam veteran went about his life, raising a son and daughter with his wife Janet, working in the automotive business, and welcoming two granddaughters. Both he and Janet — who have been married for 46 “wonderful, glorious years” — retired in 2011. They divide their time between homes in East Providence and Bonita Springs, Florida.

The scan alerted Mr. Bailey that he did indeed have something to worry about. But he was soon to learn the powerful advantages of the collaborative care the Lifespan Cancer Institute’s Upper Gastrointestinal Multidisciplinary Clinic provides.

“I checked around about Dr. Charpentier, and everyone said, ‘He’s wonderful,’” Mr. Bailey says. “He assured us, ‘Listen, I’m going to take good care of you,’ and he really, truly did.”

His primary care physician, James R. Myers, MD, sent Mr. Bailey to gastroenterologist Alan Wong, MD, MPH, for a workup. From Wong, he got the terrible news: He had hepatocellular carcinoma — liver cancer.

Mr. Bailey was referred to the Upper GI Multidisciplinary Clinic, where he met clinical coordinator Amy Doorley, NP, the patient liaison with the care team.

“I am essentially a gatekeeper, working to connect the patient to all the specialists,” Ms. Doorley explains. “But first and foremost, I provide extra care for patients at a time in their lives when they need it most.”

She arranged consultations for Mr. Bailey with Howard Safran, MD, chief of hematology/oncology at the Lifespan Cancer Institute and a nationally recognized leader in the development of new treatments for upper GI cancers, and clinic director Kevin Charpentier, MD, FACS, who specializes in liver, biliary, and pancreatic surgery.

“I checked around about Dr. Charpentier, and everyone said, ‘He’s wonderful,’” Mr. Bailey says. “He assured us, ‘Listen, I’m going to take good care of you,’ and he really, truly did.”

In November 2015, Dr. Charpentier removed Mr. Bailey’s gall bladder and part of his liver. No radiation or chemotherapy was necessary, so he settled into a routine of follow-up CAT scans every three months.

The Need for a Transplant

Both he and Dr. Charpentier recommended that Mr. Bailey apply for a liver transplant, which at that point had become the best option for treating his hepatocellular carcinoma. But first, Dr. Iannuccilli performed a procedure on Mr. Bailey’s liver called transarterial chemoembolization (TACE) in December 2016.

TACE blocks the blood supply that feeds the tumor, and delivers targeted chemotherapy. It’s part of a practice known as “bridging”: treating the tumor to arrest the patient’s cancer while he or she awaits a transplant.

As liver transplants are not performed at Rhode Island Hospital, Ms. Doorley connected Mr. Bailey with the Miami Transplant Institute, a joint program between the University of Miami Miller School of Medicine and Jackson Memorial Hospital.

The closest liver transplant centers to Providence are in Boston and at Yale New Haven Hospital in Connecticut, but the wait for an organ is significantly longer in the Northeast.

The Baileys say they are very grateful for Ms. Doorley’s seamless coordination of care with MTI, which relieved some of the pressure of a very stressful situation. “They set everything up in Florida. We didn’t have to do anything,” he says.

After a consultation at MTI in February 2017, the couple’s wait began. There’s a mandatory wait of six months for a transplant through the United Network for Organ Sharing, which maintains a central database with the names of all patients waiting for an organ.

As “snowbirds,” the Baileys returned home to East Providence in May 2017 as they normally would, because his condition could be monitored by the UGMDC team while he waited to become eligible for a new liver.

A scoring system called MELD (Model for End-stage Liver Disease) weighs several factors in determining a patient’s priority to receive an organ. As their liver function deteriorates, the rising MELD score moves the patient higher on the waiting list. The patient with the highest MELD score — the sickest patient — is at the top of the list.

In late November 2017, Bailey got the word that his MELD score qualified him for a donated liver.

On February 14, the Baileys met with the transplant surgeon at MTI, who told him, “You’re good to go. Have a bag packed, because you need to be here within four hours.”

Just a few days later, on Feb. 18, the phone rang at 3:30 a.m. It was the call the Baileys had been waiting for — a liver designated for him was coming from Puerto Rico.

The Baileys recognized the need for donor organs long before he was faced with having a transplant. “We’ve both been designated donors for years,” he says. Now he was to become the beneficiary of another person’s altruism.

Following the surgery, Mr. Bailey spent eight days in the hospital — a short stay for a transplant patient, he was told.

By late spring, the couple was back in East Providence, and he began having his follow-up care at the UGMDC. Results of his blood tests and CAT scans are shared with his MTI team.

“Mr. Bailey really went through all the different facets of the clinic,” said Ms. Doorley. “We were able to offer all of his services here as a bridge to transplant.”

After the Surgery: The Pleasures of Retirement

To see him today, you’d never suspect that Jack Bailey has been on an arduous medical journey. Just a few months after his transplant, he replaced the planks of his backyard deck. He’s has resumed the pleasures of retirement: hitting the golf links, enjoying his swimming pool, and devouring novels by favorite authors.

He's full of gratitude for the team at the Upper Gastrointestinal Multidisciplinary Clinic, including Ms. Doorley’s administrative assistant, Robin Holley, who arranged his appointments. “I can’t say enough about it, really. I would be more than happy to refer anyone to them,” he says.

It’s great to have this advanced medical care mere miles from his East Providence home, he adds, because driving to Boston would have made the whole experience that much more difficult.

Reflecting on his journey, Mr. Bailey remarks, “I think the fact that we caught the cancer so early, in its infancy, made a tremendous difference in his outcome. “That kidney stone saved my life.”

Learn more about the Upper Gastrointestinal Multidisciplinary Clinic at Lifespan