Caring is a Warm Coat | Lifespan

Caring is a Warm Coat 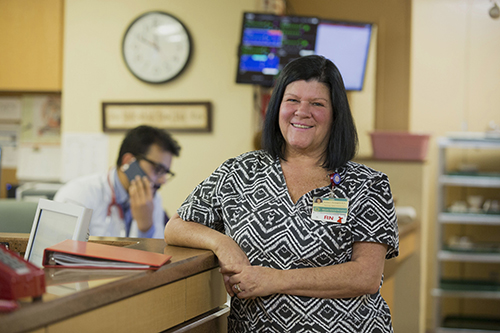 On November 17, a mother and refugee from Syria, who didn’t speak English, approached a stranger in the hallway of Rhode Island Hospital and held up an index card that stated: “Coat drive. George Auditorium.” It was good fortune that Robin DeAngelis, RN, was there to read it.

DeAngelis had been on break from the Respiratory Intermediate Care Unit and was walking through the ground-level halls of the hospital when she encountered the woman and her children. The Syrian family, new to the United States, had heard about the drive through Hasbro Children’s Hospital’s Refugee Health Clinic.

DeAngelis put her break on hold and immediately helped the family.

“The [family’s] little girl was wearing purple and green shoes, and we found, in the coats, a purple and green coat. I saw it for her, and it fit. She was so happy, and she looked so cute,” said DeAngelis.

Unfortunately, DeAngelis and the Syrian family soon found that there weren’t any coats remaining for adults, and the mother had been hoping to receive one.

DeAngelis’ break was ending; she had to get back to work, so she left the auditorium wishing for the best for the family of strangers she had tried to help.

Almost immediately after she left the room, DeAngelis says the idea to give her own coat to the mother dawned on her.

“I put my hands in my pockets and realized, I have a coat on. This would be great. She’ll be leaving here warm,” says DeAngelis, “So I turned around, went back to the George Auditorium, took it off myself and put it on the lady’s shoulders.”

Colleen Deems, a nurse practitioner for Hasbro Primary Care, had organized the coat drive and watched the emotional scene play out.

“The mother was completely excited by her generosity. And us, as bystanders, were totally dumfounded by her graciousness,” said Deems. “I told her she had better go before I start to cry.”

The coat drive, which helped 150 people get coats for the coming winter months, aimed to assist patients of Hasbro Primary Care and the Refugee Health Clinic.

“To me, delivering health with care means it doesn’t stop at the patient’s bedside,” says DeAngelis. She said it applies to assisting visitors in any way possible, “whether you’re walking through the hallways, opening a door for a person, which I had done that day.”