A New Year and a Renewed Commitment | Lifespan

A New Year and a Renewed Commitment

A new year often brings new aspirations and new goals. However, a new year can also bring a renewed commitment to tackle unresolved issues and challenges from years past.

We are moved to action by many things. Sometimes it is our aspirations—big dreams and high hopes for what should be.

Sometimes it is when we are faced with tragedy. For Brian and Barbara Goldner, it was when enveloped in unimaginable sorrow that they became tireless advocates for change. They were compelled to protect a growing yet underrepresented and misunderstood segment of our community – those suffering from opioid addiction.

In 2015, the couple’s 23-year-old son, Brandon, died of a drug overdose. The pain of their unexpected loss was exacerbated by an agonizing and very real belief that Brandon could have been saved had the Goldners known about their son’s addiction. The health system at the time let Brandon and his family down, they said.

I’m sorry to say they were right.

Brandon was treated at Rhode Island Hospital’s emergency department for several drug overdoses that occurred over a three-month span in 2015. Despite those repeated visits to one of our facilities, Brandon ultimately, and tragically, died of a drug overdose. The Goldners learned of their son’s addiction only after his death.

Brian and Barbara Goldner have become the most powerful and effective advocates promoting opioid addiction policy change in Rhode Island. They have testified before the Governor’s Task Force, among other public statements and appearances, to educate and motivate the public and private sector to act. Last year, The Alexander Perry and Brandon Goldner Act was passed to improve treatment for substance abuse. That law (also named after the son of former State Senator Rhoda Perry) created new standards to improve treatment for people with opioid addictions. The calls to action by the Goldners and other families are making a difference at the State House, our schools, neighborhoods, and yes, in our hospitals.

The federal government has also publicly recognized the need for action. In late October, President Trump declared the opioid crisis a national public health emergency. And more recently, investigative reports such as those that have appeared on 60 Minutes, have been critical of big drug wholesalers’ role in the opioid epidemic, alleging that drug distributors have turned a blind eye to opioids being diverted for illicit use.

Through the Goldner family’s tragedy, and the hundreds of other overdose patients we care for (and their families), we’ve learned a great deal. And although much work remains, our care and treatment of these patients is better today than it was just a few years back. Just recently, Governor Raimondo announced that overdose deaths were down 9 percent in Rhode Island in the first eight months of 2017. As she said, “A ray of hope.”

At Lifespan, we are committed to moving beyond the walls of our hospital out into the community, and just last spring we opened the Lifespan Recovery Center to help provide much needed outpatient treatment services to individuals battling opioid use disorder. This new, multidisciplinary recovery center is designed to meet the full spectrum of clinical and social needs of individuals diagnosed with an opioid use disorder. The team of providers works collaboratively to effectively assess, diagnose, and provide comprehensive treatment.

Meaningful action can also be somewhat less obvious. It can be the quiet conversations in an emergency department treatment bay between provider and patient. Or the improvements we continue to make so that clinicians can more easily identify when patients have been seen previously for substance abuse visits.

At every Lifespan hospital, we continue to encourage overdose patients to allow us to reach out to loved ones and are working with our emergency department staff on how to talk to patients and connect them with a lifeline, whether it be family, a friend or a recovery coach.

As the leading health care system in the state, and at the start of this new year, Lifespan is renewing its commitment to actively combat this national epidemic.

And, of course, it is the shared mission of families like the Goldners, who are speaking out, telling painful stories, and advocating for change that will ultimately turn the tide on this disease. 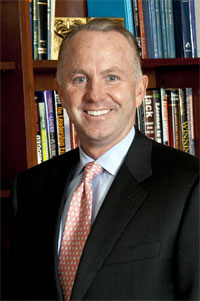 Prior to his appointment as Lifespan’s president and chief executive officer, Timothy Babineau, MD served as president and chief executive officer of Rhode Island Hospital and The Miriam Hospital. Before coming to Rhode Island in 2008, he was the senior vice president and chief medical officer for the University of Maryland Medical Center and School of Medicine in Baltimore, MD. Before the 2005 appointment at the University of Maryland, Dr. Babineau held numerous administrative positions, including vice chairman of the division of surgery, surgical residency program director and director of the center for minimally invasive surgery at Boston Medical Center and surgeon-in-chief and medical director for the Boston Medical Center Surgical Associates at Quincy Medical Center. He has been a trustee for the University of Massachusetts and a member of its Audit and Finance Committee.

Hope you all enjoy the weekend. It's going to be chilly!