Parkinson’s Disease (PD) is a common movement disorder that currently affects about one million Americans, with 60,000 new diagnoses each year. While the incidence of PD increases with age, about four percent of people with PD are diagnosed before age 50. Men are one and a half times more likely to be diagnosed.

What is Parkinson’s Disease?

PD is a neurological condition that progresses slowly and worsens with age. It is caused by the loss of certain brain cells that produce a substance called dopamine. Dopamine is essential for smooth and coordinated muscle movement throughout the body, in addition to other functions.  Understanding why the dopamine cells degenerate is the subject of ongoing research worldwide and may hold the key to a cure for the disease.

The cardinal movement-related – or motor – symptoms of the disease include:

The non-motor symptoms include:

The symptoms and their severity and progression can vary from person to person. Because different movement disorders can have the same symptoms, careful diagnosis is vital for proper treatment.

Within about ten years, many patients begin to develop changes in their symptoms, with more abnormal, involuntary movements, called dyskinesias. Progression of the disease leads to shorter-lasting benefit of medication, and then more frequent dosing is needed. At this point, alternative treatments can be considered. Your neurologist can refer you to our multidisciplinary team to determine if you are a candidate for one of these treatments.

One option is deep brain stimulation (DBS). This procedure offers patients a proven option that reduces the motor symptoms of PD, as well as other conditions including dystonia and tremor. DBS uses electrodes – or wires – surgically implanted in the brain, and connected to a pacemaker-like battery implanted in the chest.  The battery is programmed in the office to deliver small amounts of electricity to correct abnormal firing in the targeted brain region.

Another treatment for PD is Duopa therapy. This is a gel infusion of the same medication people take orally, but is delivered directly into the intestine through a surgically inserted tube, which is connected to an external pump that contains medication.

When surgical procedures are determined to be the ideal treatment, our team uses the latest technologies to provide the best, safest option for you.

Whichever stage of PD you are in, our team is here to help you. Our program offers a number of treatment options that complement our medical and surgical treatments, including nutrition, social work, nursing, and genetic counseling.

Learn more about our Movement Disorders Program and treatment options for PD. 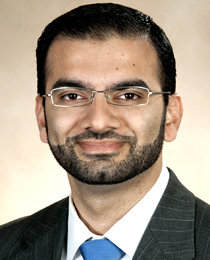 Dr. Umer Akbar is a neurologist and co-director of the Movement Disorders and Deep Brain Stimulation programs at Rhode Island Hospital, part of the Norman Prince Neurosciences Institute.

Multitasking and How It Affects Your Brain Health