The Center for Bariatric Surgery has met the highest standards for patient safety and quality of care, earning the thriving program reaccreditation by the national board that evaluates medical centers specializing in surgery for severe obesity. 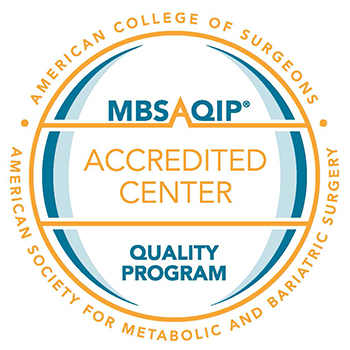 Siva Vithiananthan, M.D., chief of minimally invasive and bariatric surgery for the center, a program of The Miriam and Rhode Island Hospitals, announced that it had secured reaccreditation as a Comprehensive Center with Adolescent Qualifications by the Metabolic and Bariatric Surgery Accreditation and Quality Improvement Program (MBSAQIP®) a joint program of the American College of Surgeons (ACS) and the American Society for Metabolic and Bariatric Surgery (ASMBS).

To gain dual accreditation for adults and adolescents, the center demonstrated that it meets standards that ensure that bariatric surgical patients receive a multidisciplinary program that improves patient outcomes and long-term success through preoperative and postoperative care designed specifically for patients.

While the demand for bariatric surgery is not necessarily on the rise nationally, according to Vithiananthan, he said the center based at The Miriam Hospital continues to see its numbers grow steadily, with the number of procedures increasing about 15 to 20 percent a year. The center, established in 2012, is on pace to perform nearly 400 in 2017.

"I think that reflects the quality of the program and that it's comprehensive. When patients come here, they are taken care of rather than they just have surgery. It's collaborative and comprehensive care for the rest of their lives," said Vithiananthan. "Obesity is a chronic disease. The long-term success is making sure they have support after the surgery. That's what we do best."

Vithiananthan noted that the center is among just a handful of accredited programs in the nation that provides treatment for adolescents.

To gain accreditation, the center demonstrated that its staff is appropriately trained and that its leadership surgeons participate in meetings throughout the year to review outcomes and improve care. The center also meets requirements for participating in a national data registry that yields semiannual reports on the quality of its processes and outcomes. For more information about the center visit or call 401-793-3922.

About The Miriam Hospital
The Miriam Hospital (www.miriamhospital.org) is a 247-bed, not-for-profit teaching hospital affiliated with The Warren Alpert Medical School of Brown University with expertise in cardiology, oncology, orthopedics, men’s health, and minimally invasive surgery. It is home to the state’s first Joint Commission-certified Stroke Center and robotic surgery program. Its Total Joint Center has earned The Joint Commission’s Gold Seal of Approval for its total knee and hip replacement programs. The hospital, which received more than $23 million in external research funding last year, is nationally known for its HIV/AIDS and behavioral and preventive medicine research, including weight control, physical activity and smoking cessation. Named 2015-16 best regional hospital in Rhode Island and the Providence metro area by U.S. News & World Report, The Miriam Hospital has been awarded Magnet Recognition for Excellence in Nursing Services five times and is a founding member of the Lifespan health system. Follow us on Facebook (www.facebook.com/miriamhospital), Twitter (@MiriamHospital) and Pinterest (www.pinterest.com/MiriamHospital).

About the American College of Surgeons
The American College of Surgeons is a scientific and educational association of surgeons that was founded in 1913 to raise the standards of surgical education and practice and to improve the quality of care for the surgical patient. Its achievements have placed it at the forefront of American surgery and have made the College an important advocate for all surgical patients. The College has more than 80,000 members and is the largest organization of surgeons in the world.