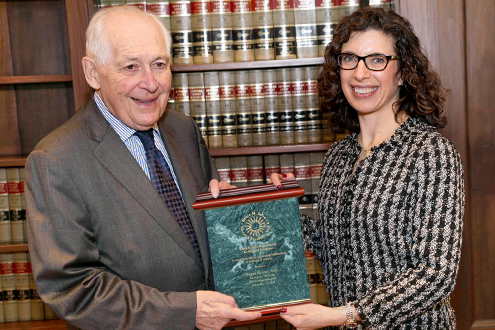 Megan L. Ranney, M.D., M.P.H., an emergency medicine physician and injury prevention researcher, was honored this week with the 2018 Bruce M. Selya Award for Excellence in Research at the Lifespan Annual Meeting. She was nominated by Brian Clyne, M.D., in his capacity as Lifespan’s interim physician-in-chief for emergency medicine and interim chair of emergency medicine at the Warren Alpert Medical School of Brown University.

Ranney has distinguished herself in the field of emergency mental health research and violent injury prevention, particularly firearm injury prevention. She is an expert in non-partisan public health research on firearm injury, and is among a group of physicians nationally bringing the matter to the public’s attention. She is frequently interviewed by local and national media outlets on the subject.

Dr. Ranney founded and directs the Emergency Digital Health Innovation Program at Brown. She is an associate professor of emergency medicine in the medical school, and of health services, policy and practice in the School of Public Health. She has published widely, with well over 100 scientific publications and 70 presentations at scientific meetings.

Ranney earned her bachelor’s degree in the history of science from Harvard College, then went on to earn her M.D. at Columbia University College of Physicians and Surgeons. She completed her residency in emergency medicine at Brown and Rhode Island Hospital, earning a master’s in public health from Brown during her residency.

The Lifespan Board instituted the award in 1999 to honor Judge Selya, chairman of the Lifespan Board from the creation of Lifespan in 1994 until 1999. Lifespan recognizes Judge Selya’s “steadfast commitment to academic medicine and his keen insight concerning the importance of academic programs to quality health care at Lifespan.” The award is intended to recognize a rising star in research, an independent investigator who has demonstrated excellence through a record of high-quality peer-reviewed publication and ability to attract research funding.

“With Dr. Ranney’s insight, commitment to research, and passion, she has already made a significant impact on emergency medicine,” wrote Dr. Clyne in his nomination letter. “I believe she is exactly the kind of person who the Bruce Selya Research Award seeks to recognize.”