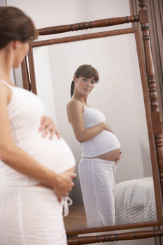 The Miriam Hospital is partnering with California Polytechnic State University to study whether weight loss can prevent the re-occurrence of gestational diabetes among pregnant women. The Miriam’s Weight Control & Diabetes Research Center will serve as one of two test sites for a five-year clinical trial recently funded by a $2.8 million National Institutes of Health grant.

How common is gestational diabetes and how does it affect mother and baby?

Gestational diabetes mellitus (GDM) affects about 18 percent of pregnancies and increases maternal and fetal health risks. In the mother, GDM increases the risk of preeclampsia, caesarean sections, induced deliveries, pre-term labor, and long-term risks of type 2 diabetes, metabolic syndrome, and cardiovascular disease. GDM also increases risk of fetal death, macrosomia (when a newborn baby is significantly larger than average) and birth trauma, or damage to a newborn’s tissues and organs, as well as long-term risk of metabolic disease.

Forty to 73 percent of women with GDM in one pregnancy will have it again in their next pregnancy. Women who have recurrence of GDM have three times the risk of prenatal and perinatal complications and future health problems, including diabetes and cardiovascular disease.

What led to this research study?

Preliminary data from epidemiologic and bariatric surgery studies suggest that lowering body weight before pregnancy can reduce the risk of GDM and maternal/fetal complications associated with the condition. Our preliminary research suggested that it was feasible to recruit women who had GDM in a prior pregnancy and promote significant weight loss before they become pregnant again. Such pre-pregnancy weight loss may prevent GDM recurrence. However, a full-scale trial testing the effects of lifestyle changes among mothers before pregnancy to reduce body weight and prevent GDM recurrence has never been done.

What is the study’s goal?

How are the study results expected to impact the incidence and treatment of gestational diabetes?

If effective, this lifestyle change could help prevent severe complications during pregnancy and delivery and shift treatment practices towards the interconception period (the time between pregnancies). This would provide an immediate, evidence-based therapy for the more than 200,000 U.S. women diagnosed with GDM each year.

There have been no prior randomized controlled trials evaluating the effects of a pre-pregnancy lifestyle intervention to prevent recurrence of GDM. With a focus on prevention, the study will directly challenge the current conventional approach to GDM which focuses on early identification and treatment during pregnancy – and move toward focusing efforts on the preconception period.