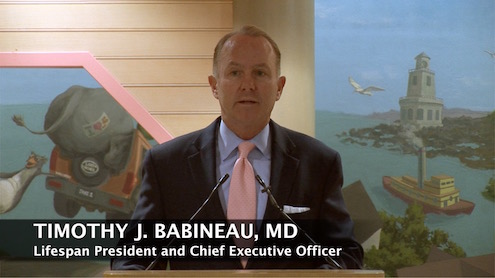 The National Institutes of Health awarded Rhode Island Hospital a $5.8 million grant to support the cancer research program. The Rhode Island Congressional delegation congratulated the hospital for earning this funding based on program excellence.

This grant, announced today at a press conference, supports the third phase of an Institutional Development Award (IDeA) Center of Biomedical Research Excellence (COBRE). Originally established at Rhode Island Hospital in 2002, the Center for Cancer Research Development (CCRD) has supported research conducted by a talented pool of cancer researchers. The center previously earned two NIH grants of $8,617,015 and $10,853,821, which supported the first two phases of activity, respectively. With this additional support in funding, the CCRD will launch several pilot programs and extend the sustainability of its programs beyond Phase III. The funding will be spread over five years.

“Thanks in part to researchers here in Rhode Island, major advancements are being made in the fight against cancer. The folks here at the center do outstanding work and these federal funds will help them upgrade their biomedical infrastructure and continue cutting-edge research that is unlocking cures and improving treatment options,” said U.S. Sen. Jack Reed, a senior member of the Senate Appropriations Committee, who has helped direct over $47 million in fiscal year 2015 NIH funding to Rhode Island. “I commend the Rhode Island Hospital Center for Cancer Research Development and their partners. This is another example of how making needed investments in scientific research and development today can lead to the breakthroughs of tomorrow.”

"Congratulations to Rhode Island Hospital, Brown University, and the center’s team on this new round of funding,” said U.S. Sen. Sheldon Whitehouse, a member of the Health, Education, Labor, and Pensions Committee. “This grant will support cancer research, foster innovation and economic growth, and train the next generation of researchers to confront tomorrow’s medical challenges. The whole congressional delegation fights hard for these funds, and we're all very gratified when Rhode Island wins big grants like this one."

“Cancer affects us all; we all know someone who has fought this insidious disease, and too many Rhode Islanders have faced this battle personally,” said Congressman Jim Langevin. “Research is essential to putting our neighbors and loved ones on the winning side of the fight against cancer, and this $6 million COBRE grant will improve outcomes and further enhance the outstanding quality of care at Rhode Island Hospital.”

“The COBRE Center for Cancer Research and Development at Rhode Island Hospital is an important institution that has helped develop new cures and treatments for cancer and created medical research jobs here in Providence’s Knowledge District,” said Congressman David Cicilline. “I am proud to announce with my colleagues in the federal delegation this $6 million grant from the National Institutes of Health that will ensure this important work continues and help keep Rhode Island Hospital on the cutting-edge of cancer research for years to come. It is critical that we continue working to bring back federal funds that expand economic opportunities for all Rhode Islanders.”

“This award will strengthen Rhode Island Hospital’s biomedical research infrastructure, support research projects in innovational scientific areas, and provide mentoring and training activities to increase the ability of junior investigators to compete independently for NIH or other external, peer-reviewed support,” said Bharat Ramratnam, MD, medical director of Lifespan’s Clinical Research Center and the head of CCRD. Ramratnam will serve as the principal investigator of the grant, and he explained that a portion of the federal monies is designated for a new program that fast-forwards cancer-related research initiated by junior investigators. Additionally, funds will be used to support state-of the-art core facilities in proteomics and molecular pathology. By propelling usage of these core services, the center will provide critical support to the clinical and research programs of cancer investigators in Rhode Island.

“In addition to the founding grants, we have secured more than $23 million in federal funding for COBRE plus $240 million in external grant funding at Lifespan since 2013,” said Peter Snyder, PhD, senior vice president and chief research officer for Lifespan. “The fact that NIH has entrusted Rhode Island Hospital with three coincident COBREs underlines the confidence they have in our research facilities and talent. That investment enables us to attract and support scientists and clinicians who work at the leading edge of their fields and who have the scientific vision to transform patient care. As we expand our pursuits at the Coro Building, the nucleus of our research activities, so too will our network of new partners, and that in turn will diversify our funding resources.”

"The Warren Alpert Medical School of Brown University is extremely pleased that the COBRE Center for Cancer Research Development (CCRD) at Rhode Island Hospital, under the leadership of Dr. Bharat Ramratnam, has received funding for another five years," said Edward Hawrot, associate dean for biology at Brown University. "Previous CCRD studies have aimed at elucidating the cellular and molecular pathways leading to cancer, especially cancers of the liver, intestine, pancreas, and colon. Such efforts are in complete alignment with the medical school's priorities, which include a major focus on the advancement of research in translational science. Jack A. Elias, MD, dean of medicine and biological sciences at Brown, envisions that the newly established Brown Institute for Translational Science will work closely with the CCRD at Rhode Island Hospital over the next five years to help translate fundamental discoveries in basic science into new diagnostics and therapeutic approaches that will benefit the community at large."

“COBREs like this one are thematic, multidisciplinary programs that enhance faculty and institutional research capabilities in states that historically have had low levels of National Institutes of Health funding,” said W. Fred Taylor, PhD, who directs the IDeA program at NIH’s National Institute of General Medical Sciences. (NIGMS) “This final phase of funding will enable Rhode Island Hospital to sustain the cancer research program it developed during earlier stages of funding and prepare the scientific cores for the transition from IDeA support to independent support."

The mission of the COBRE CCRD is to create, interpret and apply new knowledge based on original, collaborative, multidisciplinary laboratory studies to uncover the cellular and molecular pathways leading to cancer arising in the liver, intestine, pancreas and colon. Rhode Island is ranked thirteenth in the nation for cancer mortality rates. Cancer and cancer-related disease cost the state approximately $900 million per year in combined losses from medical care and decreased productivity and place a heavy emotional and mental burden on patients and their families.

By supporting biomedical research in regions where NIH funding is low, the IDeA program increases the competitiveness of investigators by supporting faculty development and research infrastructure enhancement at institutions in 23 states and Puerto Rico. NIGMS supports basic research and training nationwide, increasing our understanding of biological processes and laying the foundation for advances in disease diagnosis, treatment and prevention