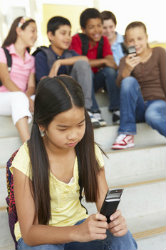 A study from Hasbro Children’s Hospital has found that nearly 50 percent of teens seen in the emergency department for any reason report peer violence and nearly 50 percent also report being the victims of cyberbullying. Almost one-quarter of teens in the emergency department also report symptoms consistent with post-traumatic stress disorder (PTSD). The study, led by Megan Ranney, MD, MPH, shows that cyberbullying, physical peer violence and PTSD are common and inter-related, and that early identification and treatment are crucial.

“PTSD in adolescents has been associated with long-term functional impairment, including poor physical health, academic failure and increased need for medical services,” said Ranney. “But, despite the availability of effective treatment, PTSD is currently underdiagnosed, underreported, and undertreated, especially among children and adolescents.”

The study found that the PTSD symptoms strongly correlated with a variety of co-occurring risk exposures, such as being a victim of cyberbullying or physical peer violence, exposure to community violence and alcohol or drug use. Few of the teens with PTSD reported receiving any mental health care in the past year.

“These results should serve as a reminder to parents, schools and physicians that these problems are prevalent in our community,” said Ranney. “This study also highlights that teens with a history of cyberbullying or peer violence are more likely to have PTSD, which is a very treatable disease if properly identified and addressed.”

Previous studies have suggested that emergency departments should screen adolescents for psychiatric disorders, given the large number of high-risk adolescents seen in the emergency department and its role as a liaison to community mental health services. “The problem is that there has been a lack of knowledge about the prevalence and impact of PTSD in adolescent emergency patients, particularly among patients who are not presenting in the aftermath of an obviously traumatic event,” said Ranney.

“Existing literature on PTSD in adolescent emergency patients describes its development after an acute assault or motor vehicle crash,” said Ranney. “But, this study highlights the need for improved efforts at more standardized mental health evaluation, possibly even screening for PTSD regardless of the reason for a teen’s visit to the emergency department.”

Ranney hopes this study will lead to greater attention to PTSD and its co-occurring risk factors in adolescent emergency department patients, as the disease is well known to impact adolescents’ long-term quality of life, and is unlikely to improve without treatment. Click here for more information on PTSD in children and teens and how to help a child who may be affected by PTSD.

This study was funded by the National Institute of Mental Health (NIMH) as part of grant number K23 095866. In addition to Ranney’s primary affiliation at the Hasbro Children’s Hospital emergency medicine department, she is also director of the Emergency Digital Health Innovation program; a physician researcher at the Injury Prevention Center of Rhode Island Hospital; and an assistant professor in the Department of Emergency Medicine at the Alpert Medical School of Brown University and the Department of Health Services, Policy and Practice at Brown University.