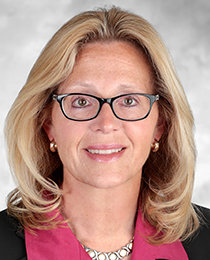 Dr. Schmidt earned her bachelor of science degree in nursing at Rutgers University, New Brunswick, New Jersey, followed by a master of science in nursing, adult nurse practitioner/geriatric subspecialty, from the University of San Diego in California. She received her doctor of nursing practice degree in health care quality from George Washington University in Washington, D.C.

She also holds a post-master’s certificate in nursing administration from the University of South Carolina in Charleston, and has achieved Lean Six Sigma green belt certification.

Among her honors, Dr. Schmidt received the State of Connecticut’s Nightingale Award for Nursing Excellence in 2010. She is a veteran, having served in the US Navy Nurse Corps.