Leading the Way in Treatment for Sepsis

Sepsis is the leading cause of serious illness and death among American children and affects more than 42,000 children annually.

Starting in mid-October, electronic alerts embedded in the LifeChart health record in the Hasbro Children’s emergency department and Tomorrow Fund Clinic are notifying care teams of abnormal vital signs that suggest patients may be at risk for sepsis and require further evaluation.

This is part of a multiyear, multipronged effort to improve sepsis care at Hasbro Children’s Hospital. By the end of 2018, electronic physiologic-based alerts will appear in all inpatient units, and clinicians will respond to inpatients with signs of sepsis and initiate care. In addition, all patients triggering a rapid response by the hospital’s FAST team will also be screened for sepsis during the initial evaluation.

The move to enhance sepsis care at Hasbro Children’s is a response to the recognition that sepsis is the major cause of death in children worldwide, with over 18 million cases per year.

Sepsis is the leading cause of serious illness and death among American children and affects more than 42,000 children annually. It is the number one cause of inpatient pediatric mortality and accounts for 7 to 9 percent of all pediatric deaths.

At Hasbro Children’s Hospital, sepsis is the leading cause of inpatient deaths. Between 2009 and 2015 there were 102 intensive care deaths; 31 percent had a sepsis-related diagnosis and 47 percent of deaths had a related infectious etiology. The mortality from sepsis is highest in infants and children with chronic medical conditions, but it also affects otherwise healthy children.

The costs of pediatric sepsis are significant, not only because of acute care but also because up to 40 percent of survivors suffer from lifelong disabilities, which increases associated costs.

The Emergency Services Department at Hasbro Children's Hospital is currently enrolling participants in a study that will determine which of two commonly used types of IV fluids is most effective to treat children with sepsis.

Sepsis Is a Medical Emergency

Pediatric sepsis is a medical emergency and survival is linked to timely treatment with targeted antibiotics, isotonic fluids, vasopressors, and aggressive supportive care. In 2017, approximately 200 patients at Hasbro Children’s Hospital were treated for severe sepsis or septic shock, and there were 6 sepsis-related deaths. 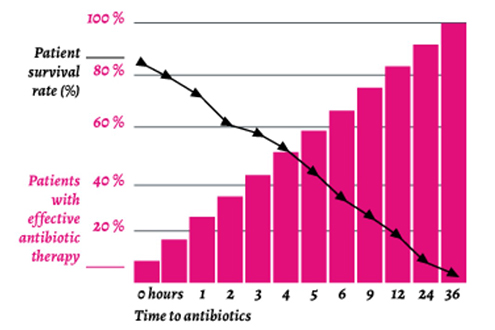 Sepsis is caused by the body’s dysregulated response to infection. Unlike most adults with sepsis, the presentation of sepsis in children appears on a spectrum, with the early signs and symptoms overlapping routine childhood illness.

The first indications of sepsis in children may be alterations in heart rate and temperature, and subtle changes in perfusion that signal systemic dysfunction. The onset of sepsis is difficult to predict, but once the systemic response to severe infection begins, it is challenging to manage. For that reason, specific screening for risk factors and early signs of sepsis should occur in all settings that care for childhood illnesses.

International guidelines for the management of severe sepsis and septic shock in adults were components of the “Surviving Sepsis Campaign,” spearheaded by societies of critical medicines to improve timely care and standardized evidence-based treatment for sepsis.

This resulted in specific guidelines for adults to be published in 2012. While this campaign focused primarily on the recognition and treatment of sepsis in adults, it raised awareness of the need for improved recognition and standardized treatments for children. Without the benefit of significant empiric evidence and with an appreciation of the unique physiology of children, the American College of Critical Care developed a society of critical care medicine expert guidelines for the management of sepsis in children in 2014.

The "Golden Hour of Treatment"

Using age-based physiology, the guidelines focused on the “golden hour of treatment”:

In addition, delays in the administration of antibiotics and resuscitative measures after sepsis recognition have been shown to increase mortality.

From 2014 to2017, pediatric sepsis experts sponsored by the American Academy of Pediatrics worked with a group of children’s hospitals’ emergency departments, including Hasbro Children’s Hospital, to develop physiology-based alerts based on vital sign abnormalities, physical findings and high risk presentations to screen for sepsis and initiate CCM/PALS goal-directed therapy.

At Hasbro Children’s Hospital, a multidisciplinary steering committee has partnered for more than a year to develop medical and care guidelines, electronic screening tools, quality projects, and educational campaigns to heighten awareness, knowledge and care around pediatric sepsis.

This effort resulted in improved recognition and initiation of sepsis treatment in emergency departments; however, it did not translate to improving inpatient recognition and treatment or overall improved outcomes in inpatients, and underscored the need for hospital-wide initiatives.

In 2017, Hasbro Children’s Hospital joined 50 other U.S. children’s hospitals in an expansion of the initial quality collaborative with the intent of reducing inpatient pediatric sepsis mortality by 2020. The initiative, led by the Children’s Hospital Association, is focused on the entire sepsis spectrum.

At Hasbro Children’s Hospital, a multidisciplinary steering committee has partnered for more than a year to develop medical and care guidelines, electronic screening tools, quality projects, and educational campaigns to heighten awareness, knowledge and care around pediatric sepsis.

By engaging multidisciplinary and multispecialty professionals for a common purpose, we are improving the quality and timeliness of our sepsis care. We expect to decrease sepsis morbidity and mortality in our patients, reduce healthcare costs and contribute to the first large pediatric clinical investigation of sepsis identification and management.