Teen pursues dream of going off to college to become a vet after treatment for anxiety, cutting herself

Slicing the edge of a razor into her own skin -- her arms and her legs, day after day -- couldn't relieve the emotional anguish that was literally scarring Alex Eisner's teen years.

Real relief and healing would only come when her family finally sought help from experts at Lifespan’s Bradley Hospital.

Until then, however, despair and isolation distanced her from family and friends and threatened her dream of graduating high school and becoming a veterinarian.

“When I was going through all of that,” Alex says, “college was basically not an option.”

Growing up, Alex had many interests. She learned to play piano and dabbled in soccer, softball and karate.  But her greatest passion was for animals -- not just her family's cats and dogs but also farm animals, especially horses. Alex spent much of her free time grooming and feeding horses at stables near her home in North Attleboro. She also competed in equestrian events, testing her prowess and nerves to jump tall fences.

But underlying those childhood joys were feelings she had trouble expressing. Some she traces to her parents' divorce when she was 12.  The break-up made her sad and angry. The passing of time didn't dull her pain. Instead, her emotional struggles only deepened. In high school, she'd feel ill at some point almost every day.

"I thought I was dying or was going to pass out," Alex says. " I didn't realize they were panic attacks."

By her junior year, waves of depression relentlessly washed over her.

"I was in my room a lot of the time, I wouldn't come out," Alex recalls. "When I would get really, really upset, I would start banging my head repetitively so it would obviously disturb my family.”

"It started on my legs so I could keep it covered up. Then it kind of progressed to my upper arms and my lower arms," she says. "It felt weird. It wasn't good, but it felt good because I was making myself feel something else. But, also, it felt bad because I was destroying my skin."

Her family sought help for her at Bradley and it was only then that they learned about her cutting.

She first attended twice-a-week visits at Bradley’s Crisis Clinic and then transitioned to its Adolescent Partial Hospital Program, which offers almost daily therapy on an outpatient basis. Later, she was treated as an inpatient for more intensive services before moving onto the outpatient Intensive Program for Obsessive-Compulsive Disorder (OCD).

"Like many young women, she experienced a progression of anxious feelings through childhood and the emergence of depression,” says Brady Case, MD, a pediatric psychiatrist who worked with Alex in the OCD program and is the medical director for Bradley's Pediatric Anxiety Research Center.

For adolescents, “Cutting is something they have easy access to and control over that they feel provides some sense of relief," Dr. Case explains. Treatment typically involves addressing the underlying mental health problems.

For Alex, that included working with the program's staff in going “out into the world to practice the things she found to be incredibly difficult."

The team at Bradley also helped Alex transition back to Bristol County Agricultural School in Dighton, Mass., a source of great anxiety since she had been out for so long.

By the time she was ready to return, Alex had missed three months of her senior year. Her guidance counselor told her graduating was unlikely and her parents were reluctant to send her to college far from home.

“Every single doctor I worked with told me that they wanted me to go to college and they thought that I could do it. It was very encouraging and really helped me focus on treatment and getting better so I could go,” Alex says. 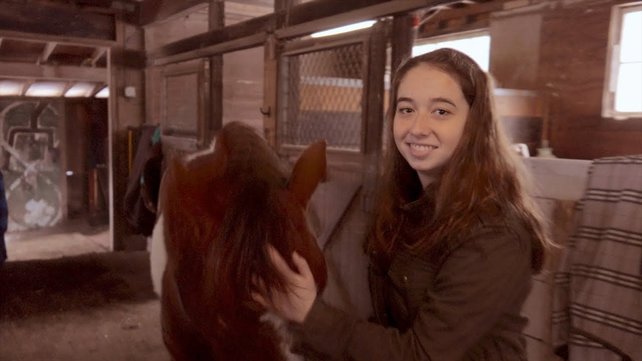 It's not easy for her to tell her story, but Alex Eisner believes it can be helpful to other teens and their families.

Case, reflecting on that decision, says, "The biggest challenge for Alex was finding the motivation to do hard things, and motivationally going to college was incredibly potent. If we really wanted her to take on the challenge of risking it in life, putting herself out there, she needed to have a really good reason. We felt she needed to be given a chance."

When Alex returned to school, she stayed after every day, making up homework and tests. Not only did she graduate, she got into her first-choice school for pre-veterinary studies, the University of Maine at Orono, where she competes on the college equestrian team.

According to the journal Child and Adolescent Psychiatry and Mental Health, one in every seven adolescents has at some point intentionally injured themselves without suicidal intentions.

During a holiday break her freshman year, Alex returns to the stables where she grew up riding Snickers and Peppy. She talks to them while grooming them and smiles as they munch on the carrots she feeds them.

“College is awesome. I'm doing well in all of my classes,” she says. “I learned at Bradley ways to keep my mind busy and not give in to the OCD compulsions and not isolate myself.”

When she talks about what she’s been through, Alex occasionally struggles to find the words and has to wipe away tears. Still, she’s eager to share her story to help other teenagers who feel troubled and alone.

"There are times when you feel like there's nothing you can do, that there's no hope," she says.  “But there is. At Bradley, all the doctors truly want to help you. They care about you. "

Her father, Richard Eisner, shares the same feelings as a parent.

"The whole process is very trying on a family,” he says. “Having a resource like Bradley was very helpful. It gave us a sense that there's light at the end of the tunnel."

Dad Writes Song That Strikes Chord With His Daughter

Richard Eisner didn’t always know what to say or do as his daughter sank deeper into despair. The more Alex shut herself in her room and missed school, the more tensions between them grew.

Having struggled with anxiety himself, he desperately wanted Alex to know he wasn’t angry or disappointed, that he loved her and understood.

"The only way I knew how was through music," says Richard, a long-time songwriter and musician.

After Alex began treatment at Bradley Hospital and revealed that she had been secretly cutting herself, Richard picked up his guitar. Soon he had a melody and lyrics, the makings of a song.

"It’s called Cut," Richard says. "It deals with cutting but also the overall aspect of self-harm and what it does to not only the person going through it but the people around you. It also addresses how, as a parent, you feel when someone you love is going through that and wanting to help but feeling helpless."

Richard has been a drummer for various New England bands, including the Ghillies, whose country rock video once aired on “American Idol” and most recently with DK’s Full House, featuring Danny Klein of the J. Geils Band.

He also performs with American Idol semi-finalist, Ayla Brown. Through his business building drums for professional musicians, he has developed relationships with many Nashville musicians. So when Richard decided he wanted to record “Cut” he got Kenny Chesney's guitarist, Jon Conley, to play the guitar parts and Conley's talented daughter, Savannah, to perform the vocals.
Then Richard posted the song to YouTube, with the hope of raising awareness of self-harm. More important, he wanted to share it with Alex.

"I think we both broke down during it," says Richard. Alex still gets choked up recalling that moment.

“The whole time I would be in my room, he’d get angry, not at me but that this was happening,” she says. “After listening to the song, he made me feel like he understood more than I thought he did.”