John and Mary Elizabeth Bruscato love to walk the dog together, spend time at the beach together, putter in the yard together. But they never expected to have treatment for heart valve disease together. 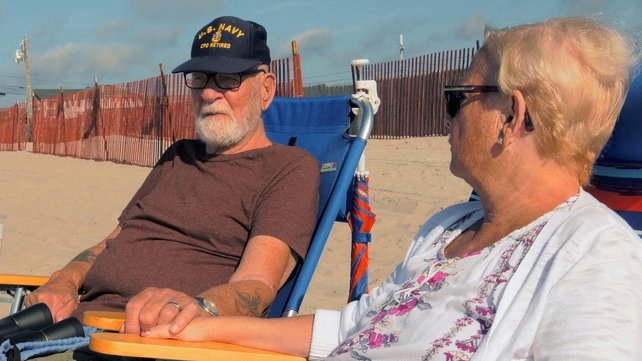 Mary Elizabeth Bruscato knew her husband John had heart issues, but had no idea her breathing problems were due to heart disease. Lifespan Cardiovascular Institute specialists performed heart valve treatments just days apart to get the husband and wife back to the beachgoing routine they love.

The Bruscatos are grateful to the team at the Lifespan Cardiovascular Institute’s Valve and Structural Heart Program for giving them the chance to enjoy life’s pleasures, such as lazing on the sand at Roger Wheeler State Beach.

“Dr. Sellke was wonderful, kind and so reassuring,” she says. “I can’t say enough good things about Dr. Sellke, I really can’t.”

Mary Bruscato, 61, had been a retail manager for 30 years, but a couple of years ago found she was unable to keep up the pace the job demanded. “I did not realize I was having heart issues, so that was how it all started.”

Her 81-year-old husband is retired after serving a full hitch in the U.S. Navy, working as a Rhode Island conservation officer, and spending some years in retail. The couple met when they both were employed by Apex department store. They married 16 years ago and settled into a home in Cranston.

A Fateful Day at the Beach

One of their summer routines is heading down to Roger Wheeler (formerly Sand Hill Cove). “We’re out of the driveway at 7:30, 8 o’clock in the morning to get down to the beach,” Mr. Bruscato says. They take their lunch and chairs and settle in to soak up the heat, take in the view, “just sitting and relaxing.”

But in summer 2017, they both were having difficulty breathing and lacked energy, two of the symptoms of mitral valve disease.

Mrs. Bruscato recalls, “One day I was walking up the beach, and I passed out. It was a really hot day … I stood there for a second, and said ‘I’m going, I’m going,’ and boom.”

She suffered a heart attack in October 2017, and had a stent placed to open a blocked coronary artery, but her mitral valve symptoms worsened.

The mitral valve lies between the heart’s left atrium and left ventricle. As the heart beats, the valve opens to allow blood into the ventricle, and then closes tightly to prevent it from flowing back into the atrium. In mitral regurgitation, some blood leaks back through the valve, forcing the heart to work harder. Symptoms include shortness of breath, fatigue, palpitations, swelling in the legs or abdomen, and abnormal heartbeat.

On March 20, interventional cardiologist Paul C. Gordon, MD, treated Mr. Bruscato’s mitral regurgitation by placing clips to tighten the valve via a catheter threaded through a blood vessel in his groin to his heart. Known as MitraClip, this nonsurgical procedure was approved by the FDA in 2013 for patients whose health conditions put them at too high a risk for open-heart surgery.

Mr. Bruscato stayed one night in the hospital, returned home, and the next morning brought his wife in for her operation.

On March 22, Frank Sellke, MD, the chief of cardiothoracic surgery at Rhode Island Hospital and The Miriam Hospital, performed open-heart surgery on Mrs. Bruscato to replace her mitral valve.

“Dr. Sellke was wonderful, kind and so reassuring,” she says. “I can’t say enough good things about Dr. Sellke, I really can’t.” The whole team at the at the Lifespan Cardiovascular Institute is tops in her book.

Looking Forward to the Future

The Bruscatos have high praise for the care they received at Rhode Island Hospital.

Dr. Gordon and his other physicians “do good. They do damn good,” says Mr. Bruscato. About the nurses, he adds, “I think they’re super … really good people.”

He continues, “I’d go there, period. If I was out of town, I’d make sure I ended up back at Rhode Island Hospital, and that’s no joke.”

Mrs. Bruscato agrees. “The nurses were the best ever. They were just so kind and attentive—just lovely.”

The surgery restored her energy, she says. “Now I can actually breathe, which is huge, because everything I did—even just walking up the stairs—was an effort.” In fact, following her late-March surgery, she felt well enough to fly to Virginia to celebrate Mother’s Day with her daughters and grandchildren.

Mary Bruscato says, “Rhode Island Hospital is one of the best facilities on the East Coast, I think. John swears by it. They treat you well, and with respect, and I don’t think it could be a better experience than what we’ve had in this journey of our life.”