Robert Ruzzo was running through drills at his Air National Guard base in Quonset when he felt a sudden sharp pain in his chest. Ruzzo, 26 at the time, was taken to a local hospital, but an evaluation found nothing significant wrong. A doctor chalked the episode up to a respiratory infection.

A year and a half later, the Coventry resident suffered two more episodes of crushing chest pain, and a brief emergency department stay. He was soon rushed to Rhode Island Hospital when physicians decided he required the specialized care of Rhode Island Hospital and the Lifespan Cardiovascular Institute. 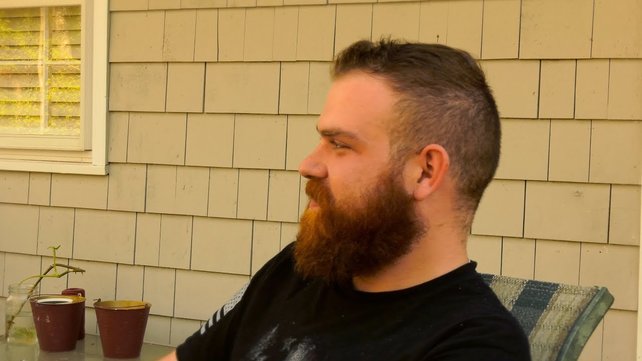 Robert Ruzzo has fully recovered from a lifesaving aortic dissection repair by Dr. James Fingleton, of the Lifespan Cardiovascular Institute. Watch the video.

Imaging revealed that Ruzzo was suffering from an aortic dissection, a torn inner layer of the main vessel that carries blood from the heart. The tear was allowing blood to force its way between the other layers of the vessel wall. About 20 percent of aortic dissection patients die before reaching a hospital, and the chance of survival ticks downward with every passing hour.

James Fingleton, MD, chief of clinical cardiac surgery operations and quality at the Lifespan Cardiovascular Institute, was the cardiovascular surgeon on call that January night. Ruzzo and his parents immediately conferred with the physician, who had grim news: Ruzzo could suffer a fatal rupture of his aorta, or dangerous disruption of blood flow to other vital organs including his brain, if he didn’t have surgery soon. “When Rob came in, I knew what the problem was. And this was a dire situation,” says Dr. Fingleton. “But we’re proud and privileged to be able to care for patients in this situation. Not every hospital can do this.”

The surgery is risky, with mortality rates for patients with additional health issues running upwards of 30 percent. However, Ruzzo was young, athletic, and otherwise healthy, so his outlook was better than most, says Dr. Fingleton. Ruzzo and his family quickly agreed to the seven-hour open-heart surgery.

The operation was a success. Ruzzo credits the entire care team for his successful recovery.

Getting ready to set out for the next big fishing adventure.

“For surgery and while I was recuperating at Rhode Island Hospital, I received excellent care (from) the nurses, the CNAs. If I wanted to go for a walk, get a drink, anything I needed, they were there,” says Ruzzo. Being the youngest patient on the adult cardiac unit took some getting used to. “I was 46 years younger than the next youngest patient I met. It was pretty comical,” he recalls.

“After going through what I was told was about 10 percent chance of survival ... I’ve had a mindset change. I want to enjoy my life. Be responsible – go to work and pay my bills – but also take every opportunity to go to the beach, spend time with family and friends," said Robert Ruzzo.

Ruzzo’s case was rare. Most aortic dissections are a result of deterioration over time, often due to high blood pressure, and usually occurring in patients in their 60s or 70s. In the unusual case of someone as young as Ruzzo suffering from the condition, it is often the result of a birth defect or a genetic tissue disorder. More rarely, aortic dissection can result from trauma, such as a car accident or another type of severe blow to the chest, which had not happened to Ruzzo.

The care team at Rhode Island Hospital believes a genetic component likely was to blame, but it has not yet been pinpointed.

Ruzzo was adopted as a young child. While he does have a relationship with his biological mother and was aware of her own heart trouble, he didn’t know about a possible genetic component until later. As it turned out, his biological mother had undergone a repair for an aortic dissection a few years before his own surgery. Ruzzo later learned that his maternal grandmother and great-grandmother had also suffered aortic dissections.

Rob threading the line on his fishing rod. The fish are already getting scared.

After recovering, Ruzzo had a comprehensive genetic workup conducted at Rhode Island Hospital to try to determine the root cause of his aortic dissection. He is hopeful that more information will provide insights to his siblings and, maybe one day, his own children.

Now, a year later, Ruzzo is feeling well and regaining strength. He takes a different approach to things now, too, maybe a little wiser than his 29 years.

“After going through what I was told was about 10 percent chance of survival and about two hours to live if I didn’t have the surgery, I’ve had a mindset change,” says Ruzzo. “I want to enjoy my life. Be responsible – go to work and pay my bills – but also take every opportunity to go to the beach, spend time with family and friends. It’s a new outlook.”