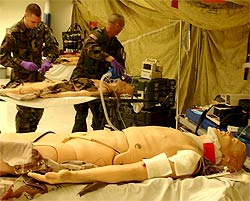 In 1995 Rhode Island Hospital was chosen as a site for "MedTeams," a multi-center military and civilian research project to study the implementation of a teamwork curriculum in the emergency center.

MedTeams is a system of teamwork training and organizational change that focuses on behavioral solutions to the problem of patient safety and to the delivery of improved patient care. Based on a set of teamwork principles that are widely used in crew resource management (CRM) programs in military and commercial aviation, MedTeams is now being implemented as a performance and safety solution in emergency care.

Despite coming from an environment associated with sophisticated technology, MedTeams is not a technological solution. The coordination and communication teamwork behaviors it teaches support individual performance and error management at the team level. MedTeams meets the requirement for teamwork in healthcare that has been addressed in medical publications and specifically recognized in the Institute of Medicine's 1999 report on errors in medicine (Recommendation 8.1 and Principle 3).

A prospective investigation of the training intervention was conducted from May 1998 to March 1999 using a quasi-experimental, untreated control group design with one pretest and two posttests. Nine hospital emergency departments were assigned to experimental and control groups. Six hospitals were allocated to the experimental group to allow for civilian-military and teaching-community setting variations. Control EDs agreed to delay training, which precluded evaluation of their intervention.

The results, details of which may be found in Morey et al., demonstrated the effectiveness of the MedTeams system. Improvements were obtained in the experimental group for six out of the seven key measures assessed. The quality of team behaviors improved, workload was not increased by practicing teamwork, staff attitudes towards teamwork were enhanced, preparation of patients for admission from the ED improved, and the proportion of highly satisfied patients increased.

The most important finding from the validation was that clinical errors were substantially and significantly reduced. A clinical error was defined as any clinical task that actually or potentially put a patient at risk. These errors were witnessed by a specially trained emergency center nurse or physician observing cases for the purpose of rating teamwork behaviors.

An example of a reported error occurred during a resuscitation. A burn patient received duplicate administrations of intravenous morphine when two nurses independently administered the drug after a physician gave a verbal order. The staff recognized the overdose when the patient's breathing slowed, at which point they intervened and the patient recovered. A check-back for a verbal medical order, a teamwork behavior taught in MedTeams, would have avoided or "captured" this error.