Tackling a Common Injury That Fells the Young and Fit

During the first game of the 2008 football season, Tom Brady suffered a season-ending tear of the anterior cruciate ligament (ACL). He is only one of many athletes who have been felled by sudden failure of this ligament, which stabilizes the knee. Thanks to current surgical techniques, this once career-ending injury kept Brady out of the game for just one season.

Although injury to the ACL is most common in young, active people, you don't have to be a professional athlete, or even an athlete, to injure the ACL. A young woman in her kickboxing class, a downhill skier, or someone simply executing an awkward jump can suddenly injure her or his knee. Each year, approximately 500,000 people in the United States sustain an ACL injury.

Because the ACL does not heal on its own, ACL reconstruction surgery is usually performed to restore function to the knee. During this surgery, the damaged ligament is removed and replaced with another tendon, either the middle one-third of the patella tendon or a hamstring tendon from the patient's own body (autograft) or from a donor (allograft). Using arthroscopic techniques, the surgeon removes the damaged ligament, drills tunnels in the tibia and femur to insert the new ligament, and then passes the new ligament into the center of the knee. Once properly positioned in the knee, the new ligament is secured in the bone tunnels with tiny screws or similar hardware. With ACL reconstruction surgery, most injured people return to full function - but at a cost.

Although surgical reconstruction of the ligament restores stability and function, the surgery does not eliminate risk of osteoarthritis. Sixty to 90 percent of people who injure their ACL show evidence of osteoarthritis within 14 years of the injury, and patients with ACL-related osteoarthritis are on average 15 years younger than is typical. Given the almost epidemic numbers of ACL injuries, it is important to address the long-term effects and lower the risk of developing arthritis.

Braden Fleming, PhD, of Rhode Island Hospital's department of orthopedics, has been involved in multiple avenues of research to address the risks involved with ACL injury. He explains that arthritis in the ACL-injured knee appears to be a result of at least two factors: a mechanical insult due to altered joint contact and a chemical insult due to inflammation. Strategies being investigated to protect cartilage and prevent osteoarthritis after ACL-injury and reconstruction include:

Fleming speculates that the mechanical damage may result from the fact that surgical reconstruction does not precisely replicate the original biomechanics of the healthy knee, and even slight changes in the position, tension or movement of ligaments change the load-bearing mechanics of the joint. This could result in greater pressure on the joint, which eventually damages the cartilage and creates the conditions for early development of osteoarthritis. In parallel to this, the initial inflammation response consequent to injury appears to damage the cartilage and undermine one of the primary lubricating mechanisms of the cartilage. Thus, Fleming's research involves several studies that look into the progression of osteoarthritis following ACL reconstruction surgery. One line of research seeks to improve surgical techniques to make the reconstructed knee behave more like the normal knee and the other seeks to find ways to enhance healing and preserve the cartilage that is compromised by the inflammation response.

In two studies funded by the National Institutes of Health (NIH), the progression of osteoarthritis following ACL reconstruction is being evaluated in clinical and experimental studies to determine how biomechanical factors, such as altered knee displacements and rotations (kinematics) and contact stress, might be responsible for cartilage damage. These studies are being performed in collaboration with Paul D. Fadale, MD; Michael J. Hulstyn, MD; and Robert M. Shalvoy, MD; all of University Orthopedics. Factors that are being addressed include the type of graft (autograft versus allograft), the position of the graft, the tension of the new ligament (tight or loose), and post-operative rehabilitation. These studies suggest that cartilage damage may persist despite treatment, and new treatment options are needed to help protect the cartilage and prevent arthritis.

The formation of a fibrin clot around the ligament is essential to provide the growth factors necessary to promote healing. Unfortunately, synovial fluid, the fluid in the knee that nourishes and protects cartilage, prevents clots from forming and prevents the ACL from healing on its own. The injected collagen scaffolding both holds and activates blood platelets around the ACL graft to release the growth factors that promote faster healing of the ligament. 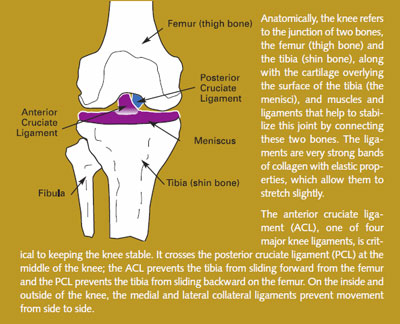 One approach to restore normal function and reduce cartilage damage may be to enhance graft healing in an effort to quickly restore normal joint mechanics. A study by Fleming and co-investigators Martha M. Murray, MD, and Kurt P. Spindler, MD, was published in August 2009 in the American Journal of Sports Medicine. The study used an animal model to test whether the application of a collagen-platelet composite (CPC) around an ACL allograft stimulated healing of ACL injuries and improved outcomes.

After surgery and healing, stability in the pigs' joints was measured as loads were applied to the knee. In the pigs that healed with the addition of a CPC, the testing showed a significant reduction (approximately 50 percent) in postoperative instability 15 weeks after ACL reconstruction. Researchers concluded that application of a CPC to a healing graft may offer a clinically relevant means to improve early graft healing after ACL reconstruction, and now have secured additional funding from the NIH to evaluate the impact of CPC on the articular cartilage. This line of research holds promise that within five to 10 years, use of a CPC will be adapted for humans, allowing a graft to heal more quickly and thereby reduce the likelihood of osteoarthritis. Eventually, Fleming and colleagues expect this research to lead to development of an effective ACL repair, using the CPC to promote healing of the original damaged ligament.

In another study, Fleming and Gregory Jay, MD, of Rhode Island Hospital, are researching ways to modulate inflammation to protect the cartilage by preserving joint lubrication. Inflammatory cytokines, which are important to the healing process, deplete the knee of lubricin, an important lubricant of articular cartilage. This promotes cartilage damage, and may eventually lead to osteoarthritis.

Fleming and Jay are researching ways to maintain joint lubrication and prevent cartilage damage during the inflammation response, which is highest for about three months after ACL injury. One study used etanercept (Enbrel) to inhibit cytokines, which leads to a significant increase in lubricin and a decrease in cartilage damage, while in another, intra-articular injections of lubricin following ACL injury was shown to reduce cartilage damage over a 28-day period.

The research being done today by Fleming and colleagues represents a significant leap in improving what has been the standard treatment for ACL injury for decades. In the 1970's, surgical repair of the ACL had a 90 percent failure rate. Then surgical reconstruction enabled those who suffer an ACL injury to return to full function. The expectation is that within five to 10 years, use of enhanced healing techniques will improve functional outcomes and decrease the risk of arthritis in ACL-injured people-and the hope is that, eventually, enhanced healing techniques will be developed that allow repair of a patient's own ACL. Researchers also expect that improvements in treatment of injuries to the ACL could also be used with any synovial joint to promote healing, restore function and lower risk of osteoarthritis.​