Typically, an ACL (anterior cruciate ligament) injury occurs when an athlete performs a twisting or cutting movement, or less commonly with direct contact. The knee "gives way" and an audible pop or snap may be heard. This injury may be quite painful, but not necessarily so. Swelling follows soon thereafter.

If you suffer a knee injury, you should apply ice (20 minutes on, 20 minutes off) and elevate the leg to reduce swelling. Crutches are beneficial. Early and full range of knee motion is essential. Although there is often some improvement early on, returning to sports brings out the feeling of instability again. Further injury to the knee may result.

What exactly is an ACL?

It is important to understand the anatomy of the knee joint. The knee is the junction of two bones, the femur (thighbone) and the tibia (shinbone). The menisci (cartilage) lie over the surface of the tibia and function as a shock absorber by keeping the two bones from rubbing directly on each other. Both muscles and ligaments help to stabilize this joint by connecting these two bones.

Ligaments are very strong bands of collagen with elastic properties, which allow them to stretch slightly. On the inside and outside of your knee, the medial and lateral collateral ligaments prevent movement side to side.

The anterior (ACL) and posterior (PCL) cruciate ligaments are in the middle of the knee and cross each other. The ACL runs from the anterior tibia to the posterior surface of the femur; the PCL joins the posterior tibia to the anterior femur. The ACL prevents the tibia from sliding forward from the femur; the PCL, conversely, prevents the tibia from sliding backwards on the femur. The quadriceps and hamstring muscles also play a very important role in keeping the knee joint stable.

Women and ACL Injury: How Often Does It Happen?

Studies have shown that female athletes suffer ACL injuries even more frequently than do their male counterparts. There are several theories of why this injury occurs more often in women. The real cause of this disturbing increase in ACL injuries in women is probably multifactorial. Whether female or male, ACL knee injuries can leave the athlete with a sense of instability within their knee. Ultimately it is this "giving way" or sense that the knee is "not right" that leads the patient to seek medical attention.

Women have wider hips, which changes the angle between the femur and tibia. This may place additional biomechanical strain on the supporting structures of the knee. Also, the tunnel or notch in the femur through which the ACL and PCL pass is often smaller in women then in men. This may play a role in ACL injury as the ligament can be sheared apart by this bony structure.

If a female athlete is less muscularly developed then her male counterpart, she will have a comparatively decreased extrinsic support provided by the quadriceps and hamstring muscle groups. Studies are addressing this issue on a biochemical level, by looking at estrogen receptors in muscle and ligaments and attempting to determine what role estrogen may play weakening these structures.

Unfortunately ACL (anterior cruciate ligament) injury is a permanent ligament injury, though it is often initially diagnosed as a "sprain."  Therefore, it is important to contact your knee doctor for a definitive diagnosis. Often, he/she will be able to provide you with a diagnosis based on your history and physical examination.

They may suggest an MRI, which is a special test that utilizes a magnetic field to image the knee. Unlike an X-ray, which shows only the bones, an MRI also helps image the details of the ligaments, cartilage, and muscle. Mechanical testing devices, such as a KT 1000 may more accurately measure the amount of pathologic knee motion.

No single test or study is 100% accurate, therefore your physician will use a combination of history of injury, physical examination, and possibly further diagnostic studies to make the diagnosis of ACL tear.

If an ACL tear is found, there are various treatment options.

A patient with a torn ACL may have problems with recurrent instability and further joint damage. The degree of instability can vary from an occasional feeling of "giving way" to being unable to pivot or jump without the knee buckling. Instability is dependent on the physical demands placed on the knee, strength of the quadriceps and hamstring muscle groups, and degree of damage to both the ligament and to other structures of the knee.

The final decision for treatment is based on multiple factors including degree of instability, patients' anticipated demands and the possibility of further knee damage.

Surgical repair of a torn ACL (anterior cruciate ligament) involves the removal of the damaged ligament and replacement with a tendon, typically the middle one third of the patella tendon or hamstring tendons. The surgery is commonly done under a mild general anesthesia. Nerve blocks are utilized to eliminate pain early on after surgery.

The complete procedure takes approximately one and a half hours. You will wake up with your knee in a brace. Patients go home comfortably the same day of the surgery. You will be taught to use crutches, given prescriptions for pain medication when the nerve blocks wear off, and given a postoperative booklet for instructions. You should expect to be on crutches only about ten days to two weeks. This early ambulation helps to prevent the muscles atrophying from disuse.

Arthroscopically, your surgeon will first examine the inside of your knee to assess the degree of damage to the ligaments, menisci and surface lining. ACL tears are often associated with injuries to the meniscus (cartilage). A small incision will be made in the front of your knee and the middle portion of the patella tendon will be removed, along with a small piece of bone on either end, or the hamstring tendons will be removed.

Using arthroscopic techniques, the damaged ligament will be removed and the femoral notch that the ligament passes through will be enlarged. Small holes will be drilled in your femur and tibia as attachment sites for the new ligament. The tendon will be secured into the bone with tiny screws. 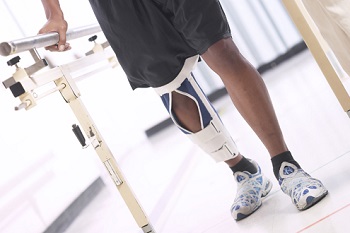 Physical therapy should begin within a few days of the surgery. This is the most important aspect of your recovery. The surgery may not be successful if the therapy is not completed.

It is important to remember that the new ligament graft is still weak at this point in time. The bone needs time to heal around the attachment sites. The ligament itself will be at its weakest during the six weeks after surgery, after which point it begins to remodel and strengthen based on the stresses that are being placed on it in its new role as a ligament. It takes six months to a year for the ligament to regain full strength.

It is essential to stay motivated. Initially, your therapist will focus on gentle flexion and extension exercises. The exercises will focus on strengthening the quadriceps and hamstring muscles. Most physicians employ a vigorous therapy program that emphasizes early return to weight bearing.

Even if you feel ready to play sports again a few months after your surgery, your new ligament is not yet ready. This is important to remember!

When Will I Play Again?

The most frequently asked question is perhaps "when will I be ready to play again?" After hours of riding the stationary bike in physical therapy you will be anxious to get back to playing sports. Remember that the bone and ligament takes time to gain full strength.
One can begin running at about three to four months after the surgery and go back to full athletic participation at about six months. This is highly dependent on age, degree of associated injuries, and commitment to rehabilitation.

The majority of athletes are able to return to their former level of competition. Some athletes prefer to use a brace on their return to play. Research has shown that braces do not "protect the knee," alter the rate of knee injury, or "hold the knee together" at the high levels of stress that can injure ligaments. Once healed, the reconstructed ligament should provide full stability. Therefore the braces, if used, are discarded.