What should have been a fun family visit to an aunt’s house quickly turned into a rush to the emergency room when Kai felt a tingling in his lips and tongue after snacking on some pistachios. His mom, Kathie, noticed her child’s lips reddening and immediately called a nutritionist friend for advice. “She told me to take him to the emergency room and keep him singing on the way there,” Kathie explained, “If he stopped singing, call 911.”

Kathie and Kai were thankful to be seen almost immediately upon arriving at Hasbro Children’s Hospital Emergency Department. Doctors treated the allergic reaction with medication and monitored Kai’s heart. The family soon realized that Kai had a significant tree nut allergy. After a few hours at Hasbro Children’s, Kai and his family were discharged and they began formulating an action plan to ensure that this never had to happen again.

Kathie knew that Kai needed to remain alert and well-educated on food ingredients in order to avoid another emergency.

Kai’s active schedule of sports, ballet, tap, musical theatre, hip-hop, and acrobatic classes has him around other children - and their potentially harmful snacks - on a daily basis. Kathie and Kai have come up with a detailed system of understanding the foods he can and cannot eat. And although Kai is only seven years old, he knows exactly which ingredients to look for on the label of every food product. “We play a game in the grocery store,” says Kathie, “I grab different foods and ask him if he wants them, and he knows to check the ingredients before saying yes.”

Kathie knew that Kai needed to remain alert and well-educated on food ingredients in order to avoid another emergency. She knew that while she couldn’t control those around her son, she did have control over his knowledge and awareness of ingredients to avoid. In addition to their diligent system, Kai wears a tree nut allergy bracelet and is fully equipped to use his epinephrine injector if necessary. 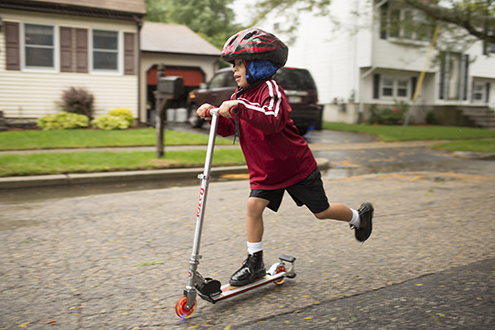 Anywhere Kai goes, whether it’s to dance, sports practice, or school, he is prepared to take the necessary precautions to avoid an emergency room visit. He follows up with his primary care physician and his allergist. Kai doesn’t let his allergy stop him from doing the activities he enjoys.

Learn more about the diagnosis and management of food allergies at the Pediatric Asthma, Allergy and Immunology Clinic at Hasbro Children’s Hospital.