A carefree summer day in their Cranston backyard quickly turned into a nightmare for Dan and his family. At a moment when he and his wife, Carolline, had their backs turned, their 8-year-old daughter, Daniella, fell while leapfrogging over putting-green flagpoles.

As three-year-old Amelia endured weeks of cancer treatment at Hasbro Children’s, nothing her family or caregivers did could make her smile. Then four-legged Moby arrived.

Lucrecia Gomez’s daughter, Debbie, spent the first six months of her life at Hasbro Children’s Hospital. Lucrecia, then just 15 years old, spent those months at the hospital, too—in many ways, growing up alongside her baby. 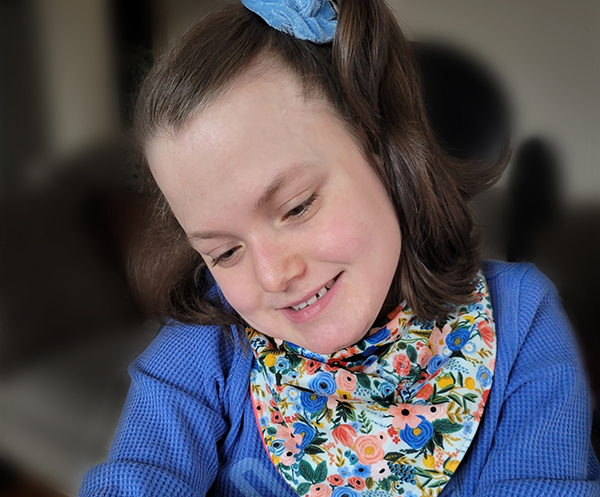 "We are so thankful for the care Teagan has received over the years at Hasbro Children’s Hospital. The staff always go above and beyond to put us at ease and make Teagan feel special. When we walk into that hospital, everyone knows my girl." — Kim Grant, Teagan’s mother

Hasbro Children’s Hospital has been part of 15-year-old Teagan Grant’s life since she was just a newborn.

Teagan was born prematurely, at 24 weeks, with Periventricular leukomalacia (PVL) – damage to the white matter in her brain. As a result of PVL, she spent the first months of her life in Hasbro Children’s intensive care unit being treated for several complications, including cerebral palsy.

When baby Teagan was finally ready to go home from the hospital for the first time at 7 months old, her mother Kim recalls, “The doctors and the nurses worked closely with my husband and me to make sure that we felt comfortable. We realized that the extra care our daughter needs would fall on us. And for that reason, we have relied on the support of Hasbro Children’s to this day.”

Over the years, Teagan has received treatment from specialists throughout the hospital, including pulmonologists, cardiologists, occupational therapists, and neurologists. She had a hip surgery at Hasbro Children’s, as well as a complex surgery to rebuild her trachea.

Teagan is non-verbal and communicates through a NOVAChat computer system, which her caregivers helped her obtain. “She is just fabulous with it, and it helps reduce her frustration,” Kim says.

Kim has been impressed by the excellent medical care her daughter has received at Hasbro Children’s and touched by the kindness of the staff, including Child Life specialists. They are always quick to make sure Teagan has a toy to play with or an engaging video to watch during a medical procedure, she says.

“The doctors and the therapists help Teagan grow a little bit happier and healthier every day,” Kim says. “They are like family to us.” 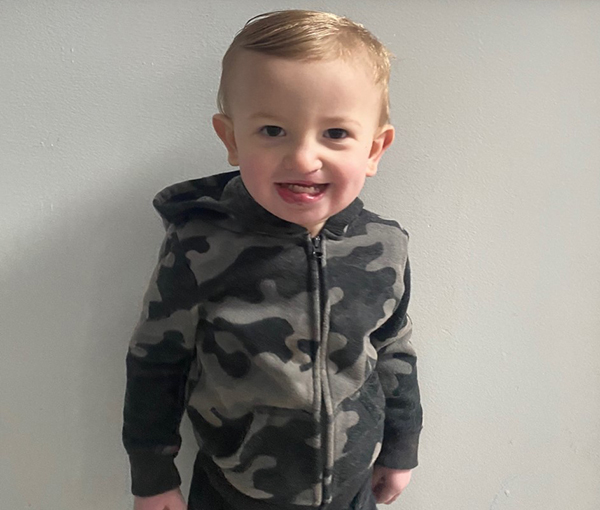 "The team at Hasbro Children's Hospital has been amazing. They follow up on everything and are always so patient with the questions I have. It was a hard road in the beginning for us, and we're just so grateful for the doctors and other medical staff. Thanks to them, we got through it." — Bobby’s mother, Courtney King

Courtney King was surprised when, in June 2020, she went into labor five weeks before her due date. She was even more surprised when she learned that her son, Bobby, was born with cleft lip and palate. The birth defect had not appeared on any of Bobby’s prenatal ultrasounds.

From his earliest days, Bobby struggled with complications due to the cleft lip and palate. He had hearing loss as a result of fluid buildup in his ears, and he had difficulty feeding and gaining weight.

After five days in the NICU at another hospital, Bobby was referred to the Cleft and Craniofacial Center at Hasbro Children’s. Through the center’s genetic testing, Courtney learned that Bobby has a rare genetic condition called Van der Woude syndrome, which caused him to develop cleft lip and palate.

When Bobby was four-months old, Chief of Pediatric Plastic Surgery Albert Woo, MD, FACS, successfully performed the baby’s first surgery – a cleft lip repair to fix the opening in his upper lip and optimize the symmetry of his nose.

Before the surgery Bobby had an orthopedic treatment called Nasoalveolar Molding (NAM), which reshapes the gum, lip, and nostrils by using dental molds and tape. The procedure was instrumental to his positive outcome, and Hasbro Children’s is one of the few institutions in New England that provides the treatment.

The following June, in 2021, Bobby underwent a second surgery to repair his cleft palate. Dr. Woo performed an innovative surgical technique he developed, which has been proven to improve long-term speech outcomes for patients.

Today, Bobby is thriving and living like a typical one-and-a-half-year-old. His hearing has normalized; he has started to talk; and he no longer has trouble eating. “He’s an endless eater – I can’t keep up,” Courtney says with a laugh.

"I made this painting to say thank you to Dr Luks. I hope it makes him and other people happy. He took care of me when I was sick and he was nice. Hasbro Children's Hospital means a lot to me because without their help I might have died." – Saoirse, Patient

In late 2015, when Saoirse was just two-and-a-half, Francois Luks, MD, Pediatric Surgeon-in-Chief performed emergency surgery to remove one of her kidneys and an adrenal gland after a Wilms tumor on her kidney had burst. Looking back, her mother Marcella says she cannot fully describe the shock and despair she felt when her daughter was diagnosed with stage 3-4 cancer and rushed into the operating room. After the surgery, Saoirse required several months of chemotherapy and radiation treatment. 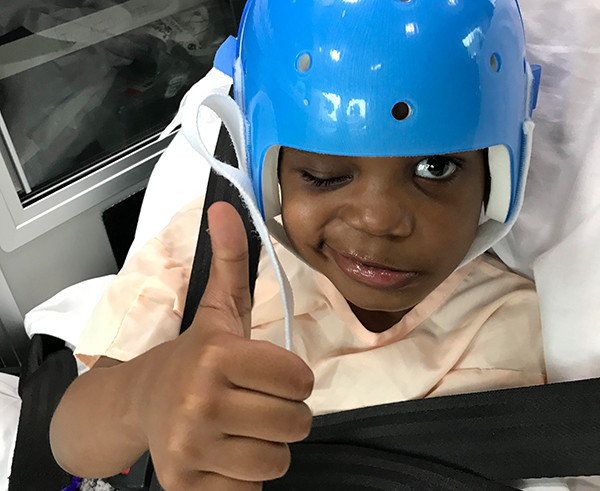 “Hasbro Children’s saved my son’s life. We appreciate them because without their dedication, hard work, and service where would we be? Where would my son be if we did not have them to save his life?” – Jaysaiah’s mother, Shavonne

At the age of five, Jaysaiah had a bleed in his brain due to abnormal blood vessels, also known as Brain AVM. He immediately had three surgeries to block and remove these blood vessels, but the fourth surgery was the most intense. Surgeon Konstantina Svokos, MD, and her team removed more than 400 tiny, abnormal blood vessels during the 24-hour procedure. During surgery he suffered a small minor stroke which led to a loss in movement on his left side. Jaysaiah had to learn how to swallow and eat again, but fortunately his memory and verbal skills were not impacted. After three weeks at Hasbro Children’s, and four weeks at inpatient rehab, he gained a lot of strength back. He continues to make amazing strides day-by-day with the help of occupational and physical therapies.