A History of Hasbro Children's Hospital

Opened amidst great celebration on Valentine's Day 1994, Hasbro Children's Hospital demonstrates the strength of thoughtful, generous people united in a common purpose. An undeniable need for a new pediatric hospital led to one of the largest outpourings of public support ever for a charity in Rhode Island.

Contributions came in ways limited only by the imaginations of the donors, and from people of all means and walks of life. Initiated by magnificent lead gifts from the Hasbro Charitable Trust and other foundations and corporations, the campaign quickly gained momentum. From employees, trustees, the hospital guild and major givers, to area artists, school children and grateful patients, no source of support went untapped. Literally hundreds of events, promotions and groups, along with an appeal to nearly three quarters of the people in Rhode Island, raised over $1 million in the final phase of the campaign. Against all early predictions, the campaign's $23 million goal was surpassed in less than three years.

The capital campaign was a rousing success and the enthusiasm generated for Hasbro Children's Hospital has continued. Another $1 million was raised following the hospital's opening to endow a hospital-based Child Protection Program for the identification, treatment and prevention of child abuse. At the same time, a large circle of volunteers was formed-and it continues to grow-who champion the many causes and support the many events associated with Hasbro Children's Hospital. 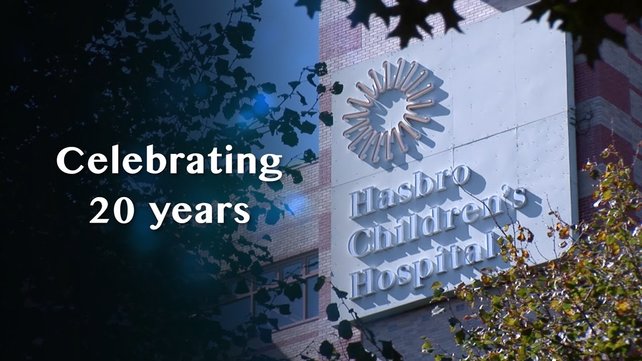 To commemorate the 20th anniversary of Hasbro Children’s Hospital, staff who participated in the opening (and continue to be employed at HCH) share memories, stories and recollections from the opening as well as future wishes.