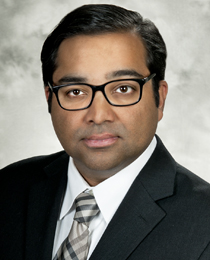 Urologic surgeon Gyan Pareek, M.D., has received the 2019 Riesman Family Excellence in Teaching Award, which recognizes a Miriam Hospital physician who teaches at The Warren Alpert Medical School of Brown University. Pareek serves as a professor of surgery (urology) at Brown and vice president of operations at Brown Urology, Inc.

Pareek is co-director of the Minimally Invasive Urology Institute and director of the Kidney Stone Center at The Miriam Hospital. His areas of expertise include kidney stones, prostate cancer and benign prostatic hyperplasia. He is board certified in urology and is a fellow of the American College of Surgeons.

“He has served as a direct mentor to many medical students, residents, and fellows—not only in the operating room but also in countless ongoing research studies. He is incredibly approachable and offers guidance and advice tying in his extensive clinical experience,” said  Timothy K. O’Rourke, Jr., M.D., a second-year resident.  "We as residents have an incredible privilege and opportunity to deliver direct care to Dr. Pareek’s patients. Time and time again they sing his praises—his patients are beyond appreciative and thrilled to have him as their urologist. I have had multiple patients with newly diagnosed urological problems ask if they can become patients of Dr. Pareek because a friend or relative strongly recommended him. On rounds he connects with his patients incredibly well and on a personal level—setting a strong example for all residents and medical students."

"He has fundamentally shaped my knowledge and technical ability to perform at a high level as a urologist,” said chief resident Paul Bower, M.D., in nominating Pareek. “He is committed to teaching in the operating room, at didactics, and in preparation for the multiple academic meetings he sends residents to yearly. He has been an outstanding mentor in guiding me through the stressful situations that residency can bring, and I know I can go to him with any problem and get sound advice. He is clearly deserving of recognition from TMH for all of his educational efforts.”

The award was presented at the annual meeting of The Miriam Hospital Medical Staff Association, held at the hospital on June 25.

Pareek earned his medical degree from St. George’s University School of Medicine and completed his residency at Lenox Hill Hospital in New York. He also completed his laparoscopy and endourology fellowship at the University of Wisconsin. In 2006, Pareek was part of a team at The Miriam Hospital that performed the first robotic prostatectomy in the state of Rhode Island. Pareek has served in a number of leadership roles at  the New England American Urological Association and the Rhode Island Urological Association.

The Riesman Family Excellence in Teaching Award was created in 2007 by a gift from the Robert A. and Marcia S. Riesman family to recognize excellence in teaching by a Miriam Hospital/Brown Medical School faculty member who is currently and actively involved in the education of medical students, resident physicians and other colleagues.