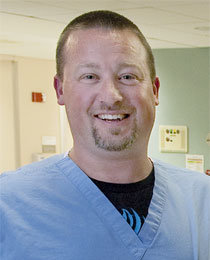 Gabriel Brunelli came to nursing later than many.

After many years working for the Block Island Ferry, he made a major transition: enrolling in the CCRI nursing program then based at Newport Hospital. In becoming a nurse, he followed in the footsteps of his mother and grandmother.

In Brunelli’s eyes, he’s keeping up the family tradition of helping others.

After graduating, he gained valuable experience working as a float nurse at the hospital, before taking a night-shift position in the emergency department. Now, after 14 years at the hospital, Brunelli is a charge nurse on the day shift in the ED, where he enjoys the quick pace.

He continues to help others, serving as a preceptor and role model for nurses beginning their own careers.