Amy Bergeron was battling complications of thyroid eye disease. The rare condition is marked by the immune system mistakenly attacking the muscle and fat tissue behind the eyes—causing progressive inflammation and damage to eye muscles, eyelids, and tear glands, and leading to the formation of scar tissue.

Mike Foncellino says he was always a healthy guy. So, you can imagine his shock when his doctor’s office called him—while he was out on a bike ride, no less—to tell him he had to get to an emergency room immediately. “The blood test I took the day before indicated that one of my kidneys was failing,” he says, “I was stunned.”

Make a gift of gratitude 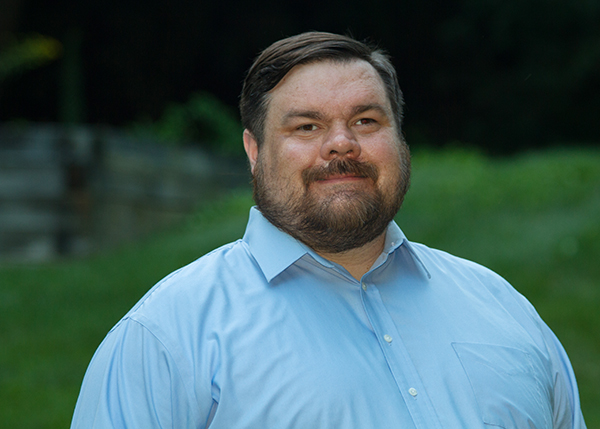 It was August of 2019, and for weeks, Ryan Durgin had been losing weight, experiencing odd aches and pains, and having difficulty keeping food down. “I just felt lousy,” he recalls. So, he went to see his primary care doctor. Just a few hours after that visit, he received a call from the office with results of his bloodwork, which raised concerns: he needed to go to the emergency room immediately.

“I packed an overnight bag and went to Rhode Island Hospital,” he remembers. Once there, Ryan underwent a battery of tests, which revealed he had swollen lymph nodes in his chest, abdomen, groin, and elsewhere.

After additional screenings and biopsies over a few days at Rhode Island Hospital, Ryan was diagnosed with Double-Hit Large Cell Lymphoma—a rare type of B-cell non-Hodgkin lymphoma. The news hit Ryan hard, but he was confident in his care team and the course of treatment they prescribed, which included seven cycles of chemotherapy from August through December of 2019.

Everything about Rhode Island Hospital and the care I received there has been amazing!

When his chemo was completed, Ryan returned to Rhode Island Hospital in January of 2020 for his first post-treatment scan. Unfortunately, it revealed another “spot” of the same cancer on his cheek. At this point, with Ryan feeling fearful and uncertain, his doctor, Hematologist-Oncologist John Reagan, MD, suggested an experimental, but promising, drug therapy as the best way to fight his aggressive, life-threatening cancer.

Ryan agreed to participate in the clinical trial and began receiving infused treatments of the drug every other week for six months. “The treatments were dramatically different than chemo,” he says, “because the side effects were nil. The only restriction on me was that I was not allowed to drive during the trial as a precaution.” In fact, Ryan reports, he missed almost no work at all throughout his treatment and basically maintained a normal life, as before the diagnosis.

Most importantly, the drug therapy worked. Ryan has been in remission for two years, and says he’s experienced “zero” negative results. His follow-up care now consists of visits with Dr. Reagan every three months and scans every six months.

“I have been thrilled with my outcome,” he reports. “Everything about Rhode Island Hospital and the care I received there has been amazing!” 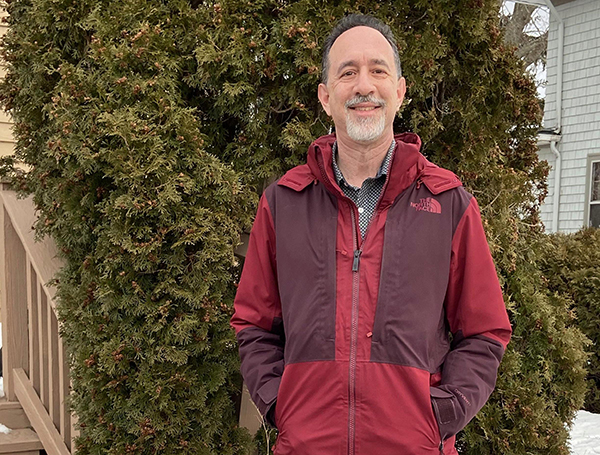 Suffering from a rare arthritic condition in his left knee and a rotational deformity that led to unexpected, excruciating dislocations of the kneecap, Michael Friend had lost confidence in his ability to walk. For the active 53-year-old who enjoyed biking, kayaking, skiing and lifting weights, his quality of life was at a crossroad. “It hurt just to move around,” he recalls.

After dislocating his patella 3 times in a short period in 2021, Michael knew something had to be done. He connected with Rhode Island Hospital and University Orthopedics surgeon Derek Jenkins, MD, who specializes in complex reconstructive joint replacements. Because of Michael’s relative young age and desire to return to remain active, Dr. Jenkins needed to think outside-the-box for the implant to use.

I am so grateful to have been able to have this major surgery take place. Needing an elective procedure does not mean it can’t make a tremendous difference in someone’s quality of life.

“This really was a custom surgical procedure,” says Dr. Jenkins. The solution for Michael would come in the form of a device – never-before-used at Rhode Island Hospital – made from a special porous metal and utilizing ‘un-cemented’ fixation technology. This technology not only allowed for greater rotation mobility, but would also last longer.

Michael underwent surgery last fall, just prior to the Omicron-fueled COVID-19 surge that paused elective procedures. Within two weeks, Michael was walking comfortably for the first time in years and back to work. And in the months since, he’s ramped up his activities, lifting weights and going to the gym with his sons. This summer, he’s eager to bike and kayak without the nervous concerns he used to have. 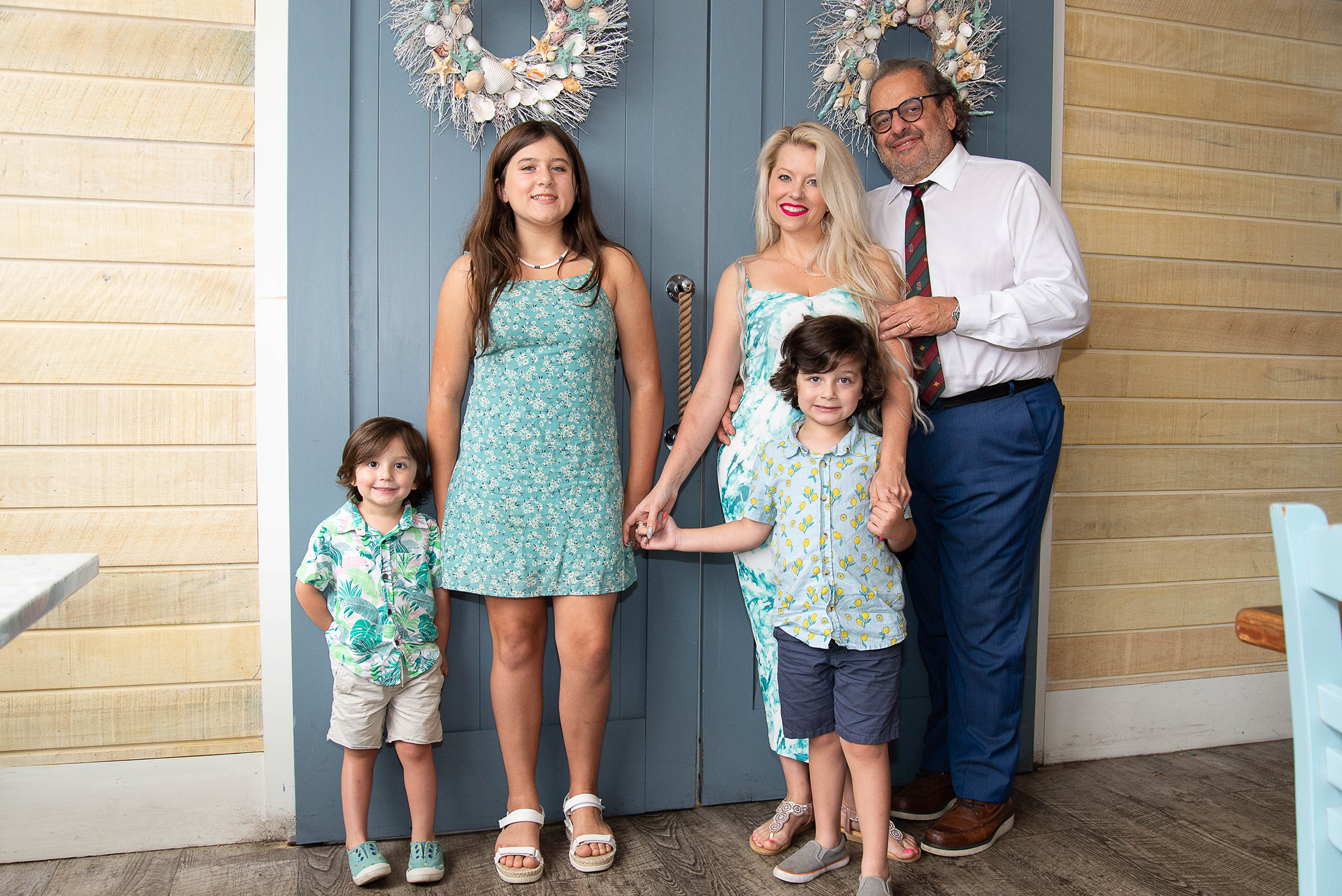 For Tom Bovis and his wife, Lauren Lynch, expressing their gratitude for the lifesaving care Tom received in 2019 is helping them do all those things. Tom suffered a life-threatening pulmonary embolism following surgery for a broken femur. Thanks to the advanced life support and the care of his medical team, Tom not only survived, but he has made a complete recovery. Sharing his story for the Day of Giving and giving back to support the hospital and people that saved his life are just a few things Tom and Lauren are doing to show their gratitude. “People need to know about the incredible care and staff behind the walls at Rhode Island Hospital—they’re amazing,” says Lauren.

We are just so grateful. Not only did they save my life, but they also saved my family! I can’t thank them enough.