Growing up in Central Falls and North Providence, the son of Hispanic immigrants, Daniel Cordero dreamed of becoming a doctor. But reality, long nipping at his heels, finally tripped him up.

Meanwhile, Dominique Fernandez was bouncing around too, shuttling between family members’ apartments in Providence as well as Taunton and Brockton, Massachusetts.

It was a struggle that began when she was born addicted to crack. 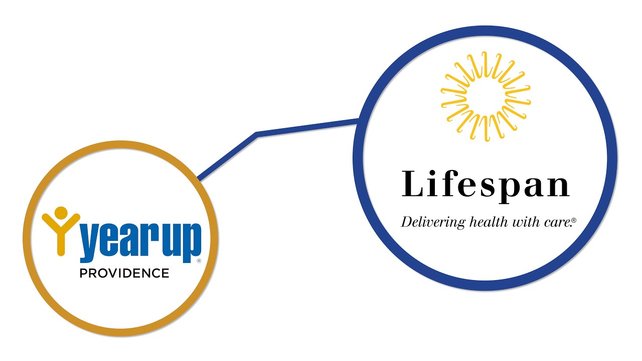 Fortunately, Cordero and Fernandez, now in their 20s, discovered Year Up Providence and secured internships with Lifespan – one of the job training program's biggest supporters. That led to full-time, permanent information technology jobs at Lifespan for both of them.

"It's because of Lifespan and Year Up where I am today," says Cordero, who for the past two years has served as a field operations technician in network services and has gone back to college to pursue becoming a medical practitioner.

"My life was going completely downhill," she says. Without the Year Up internship at Lifespan, "I honestly don't know what my life would be like."

Dominique Fernandez, 26, has a quiet yet confident way about her. It can mask the doubts and fears she's felt on her career path and the personal challenges she has faced. Her story is so remarkable that she once was invited to address a Year Up audience.

Daniel Cordero, whose parents are from Mexico and Guatemala, was born in Los Angeles. His mother brought him to Rhode Island when he was four. Cordero spent so much time helping care for his two sisters that he was absent from North Providence High School 200 days and almost didn't graduate.

Lifespan started supporting Year Up Providence soon after the national job training organization began in Providence in 2005. A national organization, Year Up’s goal is to help disadvantaged young urban adults get on career tracks. Lifespan enthusiastically committed financial resources to Year Up. It also joined other partners in offering half-year internships to Year Up participants following their mandatory completion of six months of technical and professional skills training.

Since then, Lifespan has brought aboard more than 60 Year Up interns. While some have capitalized on their experience by landing jobs elsewhere, most – 53 at last count – have been hired by Lifespan. The partnership has proven so successful that in 2017 Lifespan collaborated with Year Up to create a new internship tracked called "health care operations" focused on preparing interns for careers in medical financial services and coding. Lifespan hired all but one of the first wave of these interns it took on.

Stories like these have led Timothy J. Babineau, MD, president and CEO of Lifespan, to further investments in Year Up.

"This truly is a mutually beneficial program," says Timothy J. Babineau, MD, president and CEO of Lifespan. "Year Up strives to prepare eager, young people for the work force through valuable internships, while Lifespan, which wholeheartedly supports this mission, gets to recruit well-trained highly motivated individuals – not just for internships but for jobs too."

"Dominique and Dan are just two examples of how Lifespan and Year Up are creating nothing less than transformative experiences for many young Providence men and women," says Timothy J. Babineau, MD, president and CEO of Lifespan

Lisa Abbott, senior vice president of human services for Lifespan, says that when she took on her position a couple of years ago, Dr. Babineau told her “I want you involved in Year Up because it’s important to me.” Having taken a seat on Year Up's board of directors, she now sees the immense value of Year Up, both to the students and the companies involved in Year Up.

Abbott also sees Year Up as another valuable way for Lifespan to enhance efforts to recruit employees with diverse backgrounds.
When it comes to financial services and patient registration, "we need to have representation that is reflective of our communities," she says. Year Up students "are multicultural and live in our communities. I think that helps everybody.”

She adds that many of the interns come from the most challenging of circumstances and manage to succeed, which, she says, “speaks volumes about their grit and tenacity.”  She adds, “If we have vacancies, we know these kids have been working hard and have been trained by us and inculcated in our values. Who wouldn't want all of that in their workforce?"

As Lifespan's manager of information services, Jeffrey Berube has supervised interns in Year Up's IT track since 2006. He's hired more than half a dozen of Year Up graduates for permanent jobs.

"What I've found is that the people we get through Year Up are no different than anybody else. They just want to do well in life, but oftentimes they just don't have that opportunity afforded to them," he says. "Year Up gives them that opportunity and puts them in a position where they can show their skills and impress people."

Says Dr. Babineau, “We are fortunate to partner with a program that does so much to better the lives of future generations while providing Lifespan with employees who can support our mission of delivering health with care.”

“To achieve the results Year Up is known for, we need continued innovation and partners who get it,” said Doyle. “Year Up Providence has lead our national organization with excellence for more than a decade and Lifespan is a fantastic example of a partner with vision and the same commitment to excellence.”