Then returns for nurse training

Natalie Schieldrop was feeling carefree on May 15, 2018. She had just wrapped up the third semester of her nursing studies and had taken exams the week before. She and her fiancé, Evan Malmud, were planning for their November wedding.

In the early afternoon, she was heading down to Charlestown, Rhode Island, to help in her parents’ gift shop and deli. 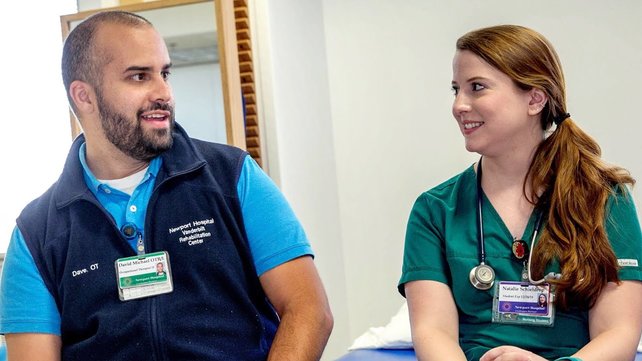 She remembers pumping gas into her Honda Civic, and what a beautiful day it was. Fortunately, she can’t recall the horrific head-on crash that followed.

A rescue crew rushed Schieldrop to the emergency department at Rhode Island Hospital. She recalls someone tenderly brushing glass fragments from her hair, but not much else about the work of the trauma team assessing and treating her injuries: broken right femur, left ankle, and left wrist, a deep gash on her foot, and a serious concussion.

After time in the ED and ICU and two orthopedic surgeries, Schieldrop was moved to the Co-Op unit where coincidentally she had done her clinical training in the fall 2017 term at Community College of Rhode Island. It gave her an invaluable perspective on the role of caregivers, she says.

“The experience was very humbling. You’re at the mercy of the people caring for you — there’s a lot of trust involved.” Schieldrop says the nurses and CNAs gave her wonderfully compassionate care. Through her ordeal, she says she gained insight into a patient’s frustrations and their struggle with the loss of control imposed by injuries like hers.

After a week’s recovery at Rhode Island Hospital, the Exeter woman was transferred to the Vanderbilt Rehabilitation Center (VRC) at Newport Hospital, where she spent three weeks working with the physical and occupational therapists, getting stronger, and learning how to cope temporarily with having only one uninjured limb.

“I cannot sing their praises enough,” Schieldrop says. “I felt like the only patient there. I didn’t ever feel like a burden.”

Suzanne Desillier, PT, and David Michael, MOT, OTR/L, and Lauren Freitas, OT, were invaluable in her recovery, she says.

“Natalie was a real trouper,” says Desillier, who agrees with Michael that their patient’s nursing knowledge was an asset. “While others might get overwhelmed or squeamish, she was used to doing patient care,” Michael says.

She was curious, collaborative, and joined in the problem-solving, her therapists concur. The teamwork she witnessed in the VRC inpatient unit impressed Schieldrop.

“Even Dr. Kemal (physiatrist Mustapha Kemal, MD) jumped in one time to help move me from my bed," she says. "What I saw was a team that was genuinely helping one another.”

When Schieldrop was being discharged in mid-June to continue her recovery at home, the Vanderbilt staff surprised the nursing student with a scrub top they all had signed, bringing her to tears.

By August, Schieldrop was pondering whether she had the stamina to begin the new semester at CCRI, but decided she wanted to give it a try.

She was thrilled when she learned that her clinical rotation would be on Turner 4, a medical/surgical floor at Newport Hospital. After her orientation, she stopped in to the Vanderbilt inpatient unit to say hello.

Wearing her scrubs, with her hair down and without her eyeglasses, the staff at first didn’t recognize her as the patient who had rolled out in a wheelchair a couple of months before.

“Then they said,  ‘It’s you!’ and they were so excited to see how well I was doing,” Schieldrop recalls.

She says her experience “gave me even more insight and understanding about what being a nurse means, not just to the patient but to the family, too.”

Schieldrop and Malmud are getting married in November, and while she was recuperating she was afraid she’d be unable to walk down the aisle. However, in August, she had a “dry run” as a bridesmaid for another friend’s wedding. She wasn’t quite ready for heels, but “I wore sparkly sneakers that matched my dress and had such a great time dancing.”

The couple is waiting for Schieldrop to finish school before going on a honeymoon, but there’s no doubt: Thanks to her remarkable recovery, she’ll be dancing at their wedding.