The field of movement disorders has been revolutionized in recent years by tremendous growth in new diagnostic information, pharmacological and neurosurgical treatments, and a deeper understanding of motor control.

With many types of movement disorders, treatment is specific to each disorder. Learn more about medication management, deep brain stimulation, focused ultrasound, and duopa therapy.

During early stages of Parkinson’s Disease and other movement disorders, oral medications can be remarkably effective in alleviating the worst symptoms. Some common classes of medication used to treat movement disorders are designed to counteract the loss of dopamine in the brain. All medications have side effects and vary in effectiveness among patients, so are carefully prescribed and monitored by the neurologist.

Neurologists medically manage symptoms until medications no longer work optimally or cause severe side effects. Typically, within about ten years, many patients begin developing large swings in their symptoms as chronic use of medications leads to abnormal, involuntary movements (dyskinesias). When this occurs, it becomes difficult to determine medications and dosages that will work optimally. 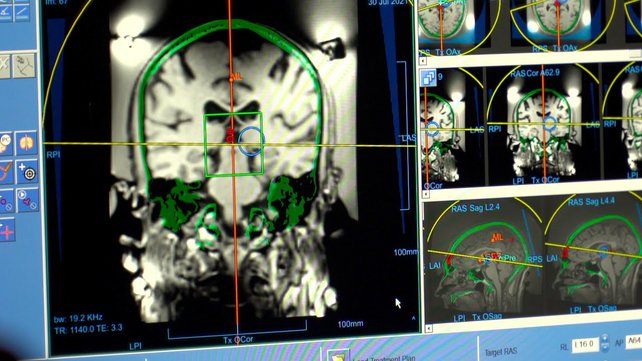 Focused ultrasound is an incisionless procedure to treat tremors and aspects of movement disorders such as Parkinson's Disease. 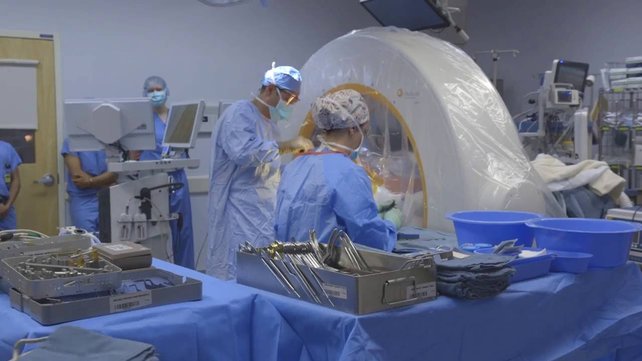 If symptoms do not respond well to medications or severely impair a patient’s quality of life, surgical treatment may be an option.

An extension wire is then attached and connected to a pacemaker-like device, called an implantable pulse generator, that contains the battery and the micro-electronic device for delivering electrical stimulation. The pulse generator is implanted in the chest or abdomen and is later programmed monthly in the neurologist’s clinic to deliver electric current to the targeted brain tissue. This current works to block the faulty signals that cause tremors and other movement-related symptoms of Parkinson’s Disease, essential tremor, and other neurological conditions.

Optimal DBS programming settings are typically achieved in about three months but can sometimes require up to six months of adjustments. The entire DBS system is placed under the skin and is not visible beyond a slight bulge.

Focused Ultrasound (FUS) is a new neurosurgical technology that uses ultrasound waves to create a small ablation to disrupt the brain activity that causes tremor. Focused beams of ultrasound energy are used to target and heat specific circuits of the brain. An MRI is used to monitor the temperature of the target location while energy is delivered.

First, low energy is delivered to disrupt abnormal brain activity. When the tremor is reduced or eliminated, the temperature is then increased so that the target can be ablated, disrupting the circuit responsible for the tremor. FUS is most beneficial for those with tremor on only one side of the body, or whose quality of life will be greatly improved with one side treated.

Another treatment for Parkinson’s Disease is Duopa therapy, which is a gel infusion of carbidopa/levodopa delivered directly into the intestine through a percutaneous gastrojejunostomy (PEG-J). The tubing goes into the intestine, while the pump and cassette containing the medication is outside the body.

Treatment options are determined by which symptoms are being addressed and a patient’s other medical and cognitive factors.

Learn more about the specific conditions we treat