Taking Control of His Life

Wesley Gwaltney had his first seizure at age 11. Ever since, epilepsy’s debilitating symptoms mounted and impacted the Westerly native’s quality of life. As a teen, he gave up driving after a frightening car crash. As a college student, the frequency of seizures created havoc on his academics and social life.

At age 27, after years of varying levels of success in managing his epilepsy with medication, Gwaltney heard of a new treatment option: laser ablation. The surgical procedure involves pinpointing the areas of the brain responsible for seizures and using a laser to deliver heat to that finite area to destroy the problematic tissue.

Gwaltney’s neurologist, Andrew Blum, M.D., had recommended the services of the department of functional neurosurgery, part of the Norman Prince Neurosciences Institute, at Rhode Island Hospital. There he met with the department’s director, Wael Asaad, M.D., Ph.D., who determined Gwaltney would be a good candidate for laser ablation. 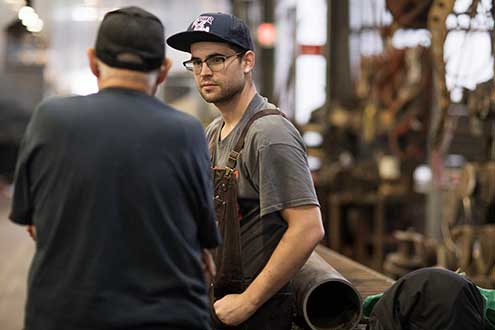 “When somebody is still having seizures despite having tried a few medications at appropriate levels under the care of a good epilepsy neurologist, at that point, they should probably be considered for surgery,” says Dr. Asaad, who performed Gwaltney’s procedure.

While laser ablation has been used for many years in vascular surgery and in other organs to target tumors, its use in the brain is relatively recent, says Dr. Asaad. Rhode Island Hospital introduced laser ablation for epilepsy in 2016 and was one of the first medical centers in New England, and still among very few regionally, to offer the treatment. In the past, surgical options for epilepsy were much more invasive and risky procedures that often required removing part of the skull to access and remove a larger part of the brain.

Using MRI, Dr. Asaad and the epilepsy team were able to identify that Gwaltney’s epileptic seizures were originating in the temporal lobe, specifically in the hippocampus. Once the target area was identified, MRI and CT imaging of Gwaltney’s head, coupled with a patient-customized, 3D-printed targeting system, enabled Dr. Asaad to precisely guide and position the fiber optic catheter with millimeter accuracy, allowing the laser to deliver treatment to the part of the brain where seizures originated.

The benefits of the procedure were significant and immediate for Gwaltney. He saw a reduction in his seizures from more than 20 per day to just a couple – often barely perceptible – episodes weekly.

“In about half of patients, their seizures go away,” says Dr. Asaad. Many others, like Gwaltney, see a significant reduction in seizures and a vast improvement in their quality of life.

The benefits of the procedure were significant and immediate for Gwaltney. He saw a reduction in his seizures from more than 20 per day to just a couple – often barely perceptible – episodes weekly.

Now, nearly two years after his surgery, Gwaltney has made a remarkable turnabout. He’s tackled a career path that before his surgery would have been unimaginable to him – welding. He credits his surgery, and his instructors at Thielsch Engineering, where he spent several months training, for giving him the courage and the confidence to pursue the intense, physically demanding profession.

With a full-time job and a new path, Gwaltney is immensely grateful to Dr. Asaad for the treatment that gave him control, literally and figuratively, of his life.

“I’ve gotten a great start with my career already, and I can’t wait for new and exciting things to come,” says Gwaltney. “Without the laser ablation, none of this would have been possible.”