One-in-a-million diagnosis leads a patient to RI Hospital from around the globe.

Ziya Gokaslan, MD, is world-renowned for his expertise in spinal and sacral chordomas. The rare tumor may occupy a space in which it can grow with no symptoms to massive size; he says he’s seen a chordoma as large as a watermelon. It wraps itself around the spine, like ivy spiraling up a gate, and the delicate task of extracting its tentacles from nerves and bone, then clearing a margin to minimize chances of recurrence, is often followed by reconstruction to save mobility, preserve bowel function and regain an otherwise normal life.

Dr. Gokaslan, chief of neurosurgery for Rhode Island Hospital and The Miriam Hospital, and co-director of the Norman Prince Neurosciences Institute, is modest about his own international reputation. He takes his clinical role seriously, wielding his specially refined skills to give patients relief and hope, but takes his greatest pride in leading a team replete with surgeons with similar world-class credentials in their respective specialties.

“What we have here, and what we continue to build, is a world-class program in neurosurgery and neurosciences,” says Gokaslan. “Our experts rival any group of physicians in the country.” Indeed, Rhode Island Hospital, its Hasbro Children’s Hospital, and Lifespan are setting the pace for innovation on a variety of surgical fronts. 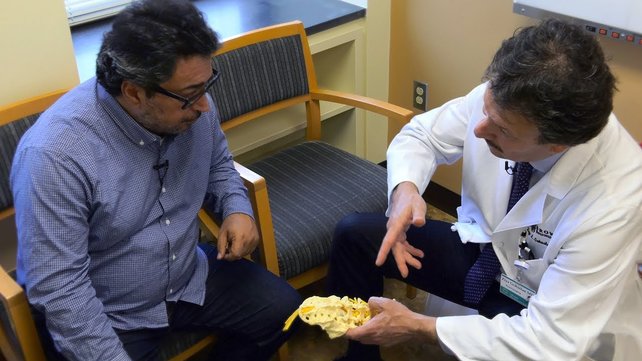 Gokhan Erkovan was stunned to learn that the lower back pain he’d been feeling was the result of a rare, cancerous tumor wrapped around his spine. Fortunately, doctors he saw while visiting his native Istanbul knew exactly where to refer the Los Angeles resident for world-class sacral chordoma care: The Norman Prince Neurosciences Institute. In the expert hands of Ziya Gokaslan, MD, Erkovan found a new beginning.

Lifespan’s neurosurgeons perform about 2,000 surgeries each year. These include cutting-edge care for spinal and brain tumors, advanced endoscopic spinal surgery, functional neurosurgery and deep brain stimulation for epilepsy, Parkinson’s and other movement disorders, routine and complex surgery for spinal disorders in adults, and pediatric neurosurgery for a range of spinal and brain conditions in children.

“Our community in Rhode Island and Southeastern New England is increasingly realizing that they can get the best neurosurgical care right here at home,” says Gokaslan. “The continued growth of our reputation and our programs means that we have been welcoming patients from around the region, across the country, and even around the globe. This is a remarkable distinction to have here in our state.”