Juuling: What It Is and What You Should Know | Lifespan 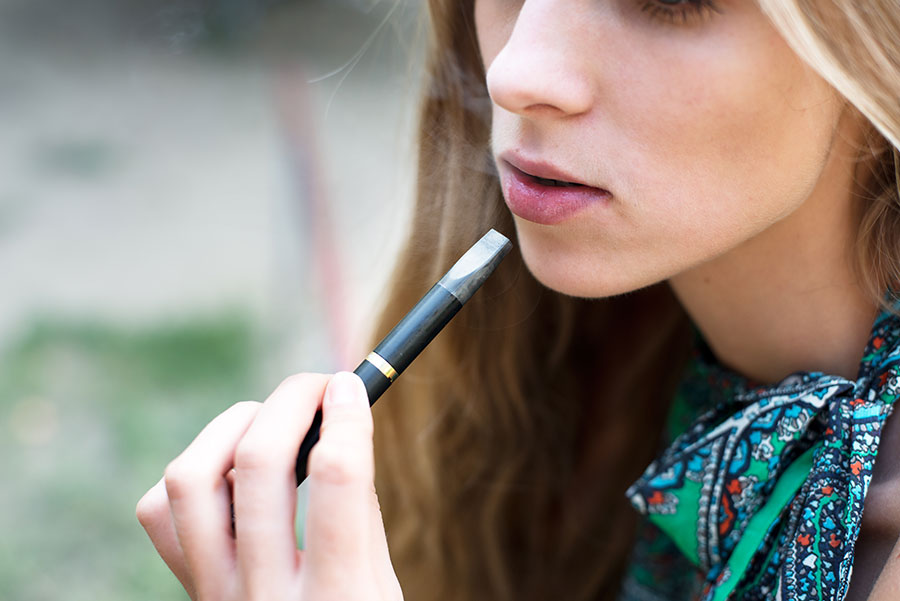 With vape culture on the rise, it seems like electronic cigarettes are becoming one of the more popular methods for smokers to begin the process of quitting. While these devices are typically marketed as tobacco alternatives for long-time smokers, the JUUL has become somewhat of a sensation with a younger, nonsmoking population.

When you think of vape pens or devices, you may have a specific image in mind. The JUUL does not exactly fit this image. It is a long, flat device with a smooth surface that almost resembles a flash drive.  The ingredients are activated by a heating element, rather than a flame, which is charged by a USB charger.  The liquid cartridges, or pods, store the liquid vape juice and contain the nicotine. Pods come in a variety of different flavors, including crème brûlée and fruit medley. Both the device and the pods can be purchased at gas stations, local vape shops or online. According to the JUUL website, you must be 21 years of age to purchase a device online.

While this particular e-cigarette is very popular with teens and young adults, most parents have never heard of it. The JUUL is easy to conceal with its USB-like appearance and minimal, quickly evaporated smoke. These devices gained some attention recently with reports of high schoolers being scolded for using the JUULs in school bathrooms and on school property.

Why are these nonsmoking teens turning to nicotine devices they never craved? Simply put, they are responding to a viral sensation. It is popular, seen all over social media, and while vaping was previously the butt of many jokes among young adults, the JUUL seems to be immune from that ridicule and revered as cool.

While e-cigarettes and vapes are far less destructive than actual cigarettes, there are still dangers involved for vape users. The juice in one JUUL pod contains 5% nicotine, which is equivalent to one pack of cigarettes. Most vape juices contain much less nicotine than a JUUL pod. Nonsmokers who vape with devices other than JUULs will typically fill their vapes with a 0-0.3% nicotine (the lowest percentage available), but most users are previous smokers and choose a nicotine content closer to 1.2-2.4%, which is still far less than that of a JUUL pod.

Other risks of e-cigarette use in adolescents and teens include:

Unfortunately, long-term health effects are not yet available because of the nuance of this trend. What we do know for sure is that the high nicotine content is making addicts out of non-cigarette smokers. Some health professionals have used the term “gateway drug” to describe the viral sensation, as JUULs are addictive and can lead to other, more harmful addictive substances. Other side effects may include coughing, dry or sore throat, dizziness, nausea or stomach ache, and headaches. While e-cigarettes are less harmful than tobacco products, JUULs still contain chemicals and nicotine and should be treated with the same caution and concern as cigarettes.  If you suspect your child is Juuling, talk with them about the dangers and why they should stop.

Click here to learn more about the risks and facts surrounding e-cigarette use among young adults.

Kids, Summer Injuries and How to Avoid Them

During the summer, given no school, longer days, and occasionally less supervision, children and adolescents will inevitably sustain injuries.

Wearing Face Masks and How to Explain It to Kids

As we move through the re-opening phases of the coronavirus pandemic, we a

Coronavirus, Kids and Signs of Stress

The coronavirus pandemic can cause stress in children too, and parents should be aware of the signs to watch fo to determine if their child may need additional support.

Daily Rituals for a Healthy Brain