A Story of Gratitude 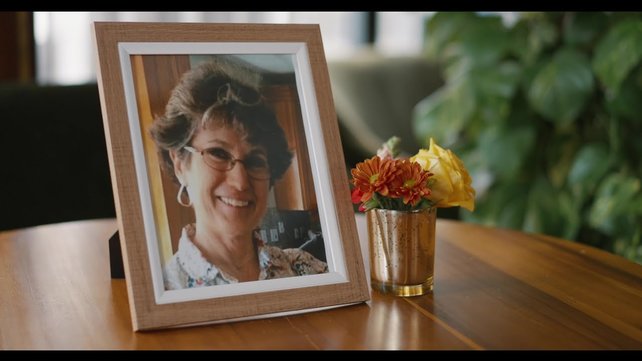 It was April 2021 and John Tarantino and his wife, Pat, felt things were moving in a good direction. The couple—parents to three adult children and grandparents to four—had recently been vaccinated against COVID-19. And after more than a year without seeing their middle daughter and her family due to the pandemic, they safely visited from Maine.

“It felt so normal,” says John, an accomplished attorney with Adler Pollock & Sheehan, and managing trustee of the Papitto Opportunity Connection. “It was a magical week that left us optimistic about the summer.”

By the end of their daughter’s visit, Pat’s hip was bothering her. She and John didn’t think much about it and chalked it up to overdoing it with the grandkids.

But when the pain got worse, Pat went to her physician, who ordered an MRI. Its results were shocking. There was a large lesion in Pat’s left hip.

“We knew it was cancer, but we didn’t know what kind,” says John. “My head was spinning.”

With the fortunate ability to go anywhere for his wife’s care, John turned to a trusted friend for advice. When that friend told him who they needed to see was right here in Providence, John didn’t question it.

The doctor was Howard Safran, MD, Chief of Hematology/Oncology at the Lifespan Cancer Institute at Rhode Island, The Miriam, and Newport hospitals. Within a day, John and Pat were in his office.

Before Pat could begin treatment, Dr. Safran needed to know whether the lesion was pancreatic cancer that had metastasized, or a second primary cancer. If a second cancer, amputating Pat’s leg was discussed.

A biopsy confirmed the lesion was pancreatic, and an orthopedic surgeon, Derek Jenkins, MD, was at the ready to insert a rod and pin to stabilize Pat’s hip. She was told she’d need a walker. Following a month healing from the hip procedure, Pat began chemotherapy in June. After a few treatments, her tumor-associated antigens plummeted by 90 percent and her mobility improved to where she didn’t need her walker. She and John spent time on Cape Cod. The holidays were particularly special with their family.

“We were picturing a miracle,” John says, thinking back. “She felt good. She was doing the things she wanted to.”

Pat’s antigens began to rise; the tumor was growing again. Dr. Safran initiated a new course of chemo, which left Pat weak and had minimal impact on her cancer. She needed the walker again, and then a wheelchair.

“The only thing left was to pray for a clinical trial,” says John.

Through his resources at the Lifespan Cancer Institute, Dr. Safran identified a promising trial. Only 12 persons in the country could participate and Pat was accepted. The experimental drug would be administered at Rhode Island Hospital.

Pat made it through two treatments before a move to hospice needed to be considered. From that painful, yet necessary decision came what John calls “a beautiful human moment” that only galvanized the compassionate care his wife received and he felt.

“It’s something I’ll never forget. Dr. Safran asked me if he could remove his mask because we had never seen his face to that point… he took it o­ and he hugged Pat. And then one-by-one every nurse came in and did the same—we got to say goodbye to them as people and see what they all looked like.”

On April 16 of this year, Pat passed away peacefully with John by her side. Less than 20 minutes after she passed, Dr. Safran walked into the hospice center unexpectedly, wanting to visit Pat when John met him with the sad news.

“Seeing Dr. Safran that morning—it was just so crystal clear how much he cared about my wife,” says John. “He’s a good person and a human first, who happens to also be an exceptional doctor.”

During her treatment, Pat and John spoke often about wanting to support Dr. Safran’s research. And it was in that most difficult moment at hospice when John shared his intention with Dr. Safran, committing $1 million to his work.

“I told him, ‘You gave us May to Christmas; I had my wife back—a lot of people don’t make it two months after a stage 4 diagnosis like this,’” he says. “We were married almost 45 years, and I don’t think we were ever closer than we were during her treatment.”

“Nothing would make me happier than to be alive and hear Dr. Safran tell me that stage 4 pancreatic cancer is no longer a death sentence. I’ve never had more confidence in someone as I have in him—I truly believe he can figure this out.”

Give to Lifespan Cancer Institute