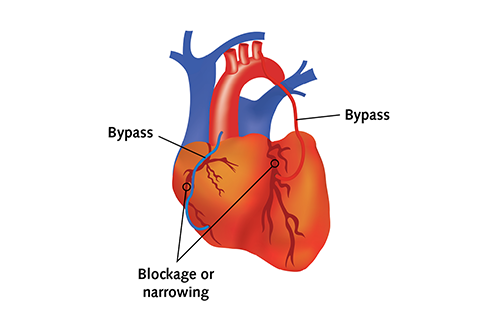 Hospitals across the country are experiencing a decline in the number of bypass surgeries due to more effective medication to lower cholesterol, the use of angioplasty and stents, and behavior modifications such as exercise and diet. Those patients who do require bypass surgery may have more complex medical problems. They often have extensive coronary artery disease, are older and have co-morbidity factors such as diabetes, lung disease, high blood pressure, abnormal kidney function, peripheral vascular disease and previous heart attack with multiple stents. However, with the advent of advanced technology, better perioperative care and improved surgical techniques, the chances of success for even very ill patients are better than ever. Our experienced cardiac surgical team has continued to perform coronary artery bypass surgery with lower morbidity and mortality rates than the national average for many years. Our results exemplify the level of excellence that is standard at our hospitals.

The internal mammary artery is used as a bypass vessel in the majority of our patients. This artery, located inside the chest wall, is known for its extended patency and function and is associated with improved long-term survival. Vessels used for bypass have long been limited to leg veins (saphenous veins). Today, we are more likely to use arteries taken from the arm, because arteries appear to last longer than veins. Nearly all of the vessels are taken by minimally invasive endoscopic (camera) techniques resulting in less painful incisions and more cosmetically pleasing results.

We also have the capability to do off-pump coronary bypass surgery, which can be particularly helpful for patients with advanced lung or kidney disease or  certain bleeding disorders.