Most people who have come through rigorous treatment for cancer, including an advanced procedure called HIPEC, would be happy just to regain their health. For Lisa Jacome, though, it had an additional, unexpected benefit.

“The best part of this whole experience was after, when I found that I had more courage and more strength as a person. I grew.” 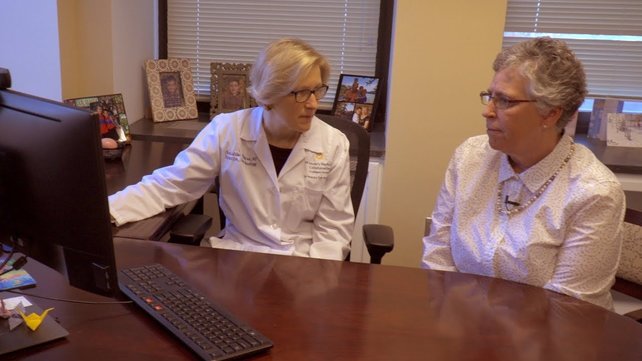 Jacome, of Portsmouth, Rhode Island, was in a weight loss program in the summer of 2018. At first, she was dropping pounds, but in late August, “I started gaining weight, even though I was sticking to the program. So I knew something was wrong.”

She consulted her primary care physician, Diane Siedlecki, MD. An ultrasound of her abdomen showed an accumulation of fluid. A followup CT scan revealed an ovarian mass.

Dr. Siedlecki referred her patient to Christina Bandera, MD, a gynecologic oncologist and director of the Center for Gynecologic Cancers at the Lifespan Women's Medicine Collaborative, and chief of obstetrics and gynecology at Rhode Island Hospital and The Miriam Hospital.

“Everyone said ‘She’s wonderful,’ ‘She’s great,’ ‘She’s the best,’” Jacome said of Dr. Bandera — praise she echoes after her own experience.

Jacome was found to have Stage III ovarian cancer.

“Lisa had a CAT scan that was very typical for ovarian cancer,” Dr. Bandera. “She had a large mass in the ovary. She had a large amount of free fluid in the abdomen, which we call ascites, as well as signs of tumor nodules throughout the abdomen and pelvis.”

According to the National Ovarian Cancer Coalition, only about 15 percent of ovarian cancer is diagnosed in the early stages, because some of the symptoms are vague or commonplace. Symptoms typically arise in advanced stages, when tumor growth creates pressure on the bladder and bowel, and fluid accumulates.

In addition to her weight gain, Jacome experienced bloating and constipation — two symptoms of ovarian cancer.

After meeting with a team of oncologists that is called a “tumor board,” Dr. Bandera advised Jacome of the treatment plan.

“Dr. Bandera decided that the best course of treatment for me would be to start with chemotherapy before my surgery,” Jacome said. She underwent four sessions of chemotherapy at The Miriam Hospital over the course of 12 weeks, beginning September 28, to shrink the tumors in her abdomen. After a one-month recovery over the holidays, she had surgery and the HIPEC procedure January 3, 2019, with Dr. Bandera and Thomas Miner, MD, FACS, chief of surgical oncology at Rhode Island Hospital.

In addition to gynecologic surgery, Jacome’s gallbladder, appendix, and omentum (a membrane that encases the stomach, large intestine and other abdominal organs) were removed. The HIPEC procedure, an innovative technique used to treat primary and metastatic cancers of the abdominal area, including certain gynecologic cancers, followed.

The aim of HIPEC is to destroy any microscopic cancer cells that remain after a patient’s surgery.

HIPEC was pioneered for the treatment of gastrointestinal cancers. “We’re fortunate here in Rhode Island that Dr. Tom Miner has a very successful HIPEC program for GI cancers, and he’s treated more than 300 patients. He helped us develop our program for ovarian cancer,” Dr. Bandera said.

“We were very fortunate because we had an intensive care unit, perfusionists, nurses, and support staff that enabled us to very quickly develop the expertise, and we were able to treat 12 patients in the first year of offering this exciting treatment.”

Jacome said she was told she could be in the hospital for as long as two weeks, but was able to return to the Portsmouth home she shares with her mother after only six days. “Everything went very smoothly for me.”

Feeling “amazing” after her recovery, Jacome is enjoying her pastimes. “I love to swim, and I found that I was able to swim longer, and have more endurance. And I’m back to playing the violin.” She performs with the Community String Project in Bristol.

Jacome, who is a civilian employee at Naval Station Newport, said “I’m lucky and blessed that I have my family, friends, and people at work who are so supportive.”

She’s also grateful that, as a Rhode Island resident, “I  have such medical expertise available to me. Dr. Miner is a pioneer in the HIPEC procedure, and I was very lucky to have him as my doctor.”

Jacome continued, “Dr. Bandera just makes me feel like I’m the most important patient she has. She is amazingly great — I totally trust her — and her staff is very wonderful as well.”

Throughout the months of her treatment and recovery, everyone Jacome interacted with took the time to explain things, and never dismissed any of her worries. “They made you feel like you were their only concern,” she said.