Honoring the Life of Colby Cave

Providence was a special place for Emily and Colby Cave. They both grew up in Canada but met and fell in love in Rhode Island’s capital city while Colby was playing for the Providence and Boston Bruins from 2015 to 2019. While he was with the team, the ice hockey center even spent some time volunteering at Hasbro Children’s Hospital.

Tragically, in April 2020, just eight months after the couple’s wedding, Colby passed away at age 25 due to a colloid cyst.

“He was genuine, caring, selfless, and had a contagious laugh. But most importantly he had the biggest heart,” Emily says. “He always wanted to help people.”

As a way of honoring Colby’s spirit and legacy, Hasbro Children’s Hospital established The Colby Cave Medical-Psychiatric Fund with a $50,000 donation from the Boston Bruins Foundation. The fund supports entertainment and enrichment programs for children and adolescents who are simultaneously struggling with psychiatric and medical illnesses.

“Colby had a soft spot for Hasbro Children’s, for sure,” Emily says. “He always glowed when he talked about his visits.”

Specifically, the fund has allowed the hospital to expand programming in the Healing Arts, including hosting visiting artists, musicians, and yoga instructors.

Colby’s memorial funds—which also includes one established by the Edmonton Oilers, the team he had been playing for at the time of his death—primarily support mental health- related programs for children.

“Mental health was super important to us in our life together, and I feel like it doesn’t always get enough attention,” Emily says.

The Bruins Foundation raised funds for its gift through various events, such as Colby Cave Nights in Providence and Boston. At the Providence event, the P-Bruins retired Colby’s number, 25—making it the first one to be raised to the rafters in the organization’s history.

“We thought it would be best to donate to the community where Colby spent the majority of his professional playing career, which was Providence,” says Bob Sweeney, President of the Boston Bruins Foundation. “I applaud Emily for helping us direct funds to children who are in need of assistance.”

Emily adds that she is grateful the Bruins Foundation has helped her honor Colby in a way that would be meaningful to him.

“We were only married for eight months and didn’t have the opportunity to have kids of our own,” Emily says. “But he would love knowing how many kids are going to be helped because of his fund. It’s so special that we’re still taking care of kids together, with him in heaven and me here.”

Donors and hospital leadership gathered outside in the healing garden on June 1 for a ribbon cutting and open house to celebrate the completion of extensive renovations to Hasbro Children’s Hospital. The state-of-the-art upgrades were funded by the Every Child, Every Day campaign, which raised more than $41.2 million – making it the most successful campaign in the history of Lifespan.

Attendees listened to a brief speaking program before embarking on small group tours to get a first-hand look at the refreshed lobby, emergency room, patient floors, ambulatory clinic, and other areas.

In his remarks, Rhode Island Hospital and Hasbro Children’s Hospital President Saul Weingart, MD, noted his appreciation for the many generous donors who supported the campaign. He also thanked Dimeo Construction, which completed the renovations on time, without interruption to patient care, while dealing with the challenges of the COVID-19 pandemic.

At the Heart of Everything We Do 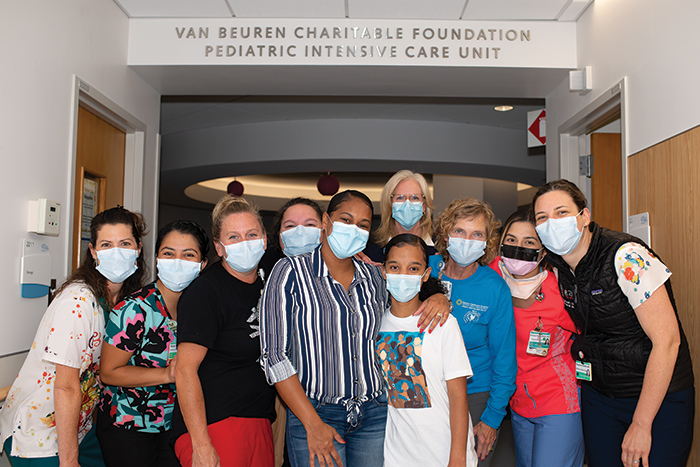 Child Life is an essential piece of the program, funded entirely by philanthropy.

I had no idea I was in a helicopter,” recalls Lara Andrade, reflecting on that fateful day in March 2021 when she was airlifted to Hasbro Children’s from a hospital near her family’s Massachusetts home.

It all began a week prior when Lara, now 17, was complaining about headaches that wouldn’t go away. Her mom, Karine, and dad, Avelino, took her to the local emergency department, where she was diagnosed with an ear infection. A few days later and not yet feeling better Lara started struggling to breathe.

She was rushed back to the nearby hospital and a barrage of tests came back normal. But Lara’s sudden, odd, and confused behavior alarmed doctors, who wanted her to go to Hasbro Children’s immediately.

“I didn’t even know where Providence was,” says Karine, who grew up in Cape Verde. “I started to wonder if she was going to survive, that’s how scared I was.”

More than a decade ago, Hasbro Children’s tapped Fran Pingitore, PhD, PCNS-BC, to lead its Patient- and Family-Centered Care initiative. The model aimed to redefine relationships in health care by emphasizing collaboration to plan, deliver, and evaluate care among providers, patients and families. It would later be instrumental to Lara’s medical journey.

“As providers and as a hospital, we do a lot to and for our patients, but this was about partnering with our patient families, amplifying their voice in the care of their child, and meeting them where they’re at,” Dr. Pingitore says.

‘Meeting families where they’re at’ is a mantra you’ll hear frequently at Hasbro Children’s. It’s the hospital’s commitment to getting to know and understand each family’s individualities and where they may be with their anxieties and fears—which, ultimately, supports care delivery and leads to improved outcomes. 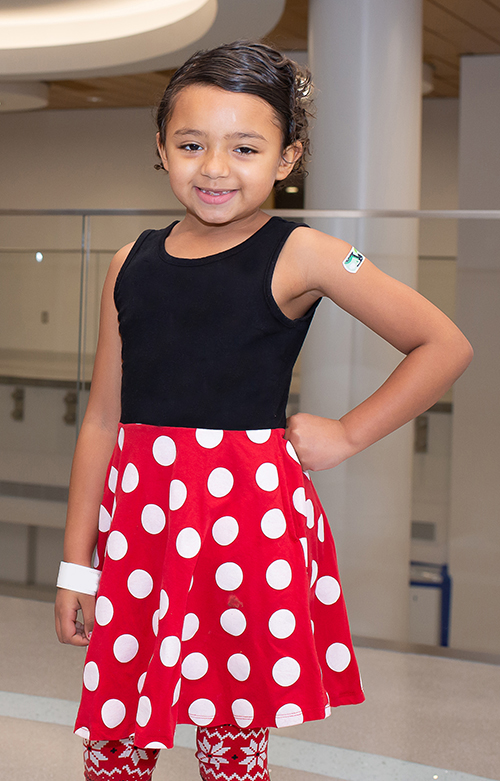 On a typical spring Wednesday in 2020, Ryan Taft’s 4-and-a-half-year-old daughter Arianna woke up complaining about a lump on her side. Thinking it might be something minor, such as a hernia, the family brought her to the emergency room at Hasbro Children’s Hospital to get it checked. Later that day, Ryan was shocked when Arianna was diagnosed with the pediatric kidney cancer Wilms tumor. Doctors found a 13-centimenter tumor on her right kidney and spots on her left kidney, lungs, liver, and lymph nodes. The cancer was stage 5.

“The whole world just crashed down on us,” Ryan says. “At first, I thought the doctor was in the wrong room, but that wasn’t the case, unfortunately.”

Two days later, Arianna had her first surgery, a six-hour procedure to remove her right kidney and the tumor attached to it. A couple of days later, she began nine months of chemotherapy, and then started receiving radiation therapy as well.

For the better part of a year, they were in and out of the hospital. “We met so many doctors and nurses and child life specialists and social workers – everybody was just fantastic,” Ryan says. “They made it a much less horrifying experience than it could have been. And for that, we are eternally grateful.”

Ryan especially recalls how Arianna’s nurses and the hospital’s Child Life specialists made the experience easier for her. From her hospital bed, she enjoyed math games, coloring, and visits from a therapy dog. She also had “tea parties,” played with her favorite “Frozen” toys, and painted her nurses’ nails.

“They’d have one finger pained pink and the other painted blue, because she’s four and a half, and to their credit, they came back in the next day with those same painted nails,” Ryan says. “It was really special, and it makes you realize what kind of a person it takes to work in an environment like Hasbro Children’s.”

In February of 2021, Arianna received her last treatment. She now returns to the hospital several times a year for screenings. Otherwise, she’s living like a typical 6 year-old – filling her days with schoolwork, dancing and cheerleading lessons, and time with friends.

“Looking at her today, you’d never know about the cancer, unless she told you her story,” Ryan says. 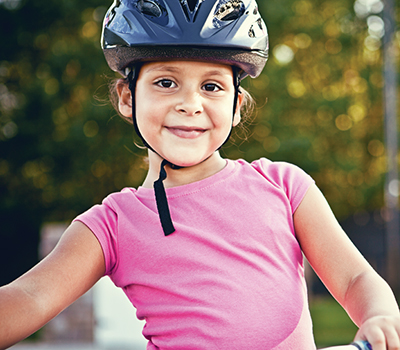 Increasingly, Rhode Island children, particularly those from lower-income communities, are struggling with weight-related conditions and seeking care at Hasbro Children’s Primary Care Clinic. In response, one of the clinic’s programs is making great strides in treating this vulnerable population.

Called Healthy Eating Active Living Through Hasbro (HEALTH), the program is directed by Celeste Corcoran, MD, and aims to reduce the issue of childhood obesity in kids and young adults through education. Participants learn about reading nutrition labels, sugar-sweetened beverages, exercise, screen time, and much more.

Recently, a generous gift from the Raymond T. and Ann T. Mancini Family Foundation helped the HEALTH program expand its important mission. The gift has funded the hiring of a part-time clinical care coordinator who serves as a liaison to patient families in Providence and other nearby urban core cities, providing educational outreach, programming, and follow-up care.

Donating to the HEALTH program was a perfect fit for the Mancini Family Foundation as the family specifically looks to support causes related to widening access to education of all kinds, according to Deborah Mancini Morrocco. Her parents, Raymond and Ann, started the Foundation as a way to use some of the profits from their flooring and beverage distribution businesses to help those in need.

“The way the program engages families on healthy eating is very impressive,” Deborah says. “It takes a lot of time and energy to deliver the education piece around what and how to eat. This program will help kids live happier, healthier lives, and it was an honor to be able to support the hospital in this way.”

BankNewport has awarded $15,000 to support the Food is Medicine initiative at Hasbro Children’s Hospital, which uniquely weaves together food security and primary care.

Hasbro Children’s has been awarded a $28,000 grant from the Rhode Island Foundation’s Special Medical program to support a Pediatric Obesity Fellow in our Primary Care Clinics and HEALTH Clinic.

The Dunkin’ Joy in Childhood Foundation has awarded Hasbro Children’s Hospital a grant of $27,125 support a teen prom event this coming Spring. The Adolescent Leadership Council (TALC) is already working on planning the big night!

Hasbro Inc. has awarded the hospital a grant of $50,000 to support Child Life Services and Healing Arts programming. Play and the arts are valuable healing modalities at Hasbro Children’s Hospital, both complementing the medical and mental health care we provide and making the experience of visiting the hospital a little less stressful.

One Mission awarded a grant of $26,660 in continued support of the One Mission Creative Arts and Healing Program in The Tomorrow Fund Clinic at Hasbro Children’s Hospital. Designed to lift the spirits of children fighting cancer and their families, the healing arts programming and other special activities made possible by One Mission’s generosity will have a meaningful impact on the entire family during some of the most difficult days of their lives.

Through the Department of Elementary and Secondary Education, Hasbro Children’s Hospital was awarded a Rhode Island State Designated Grant of $90,000 in support of the hospital’s school program. The Hospital School ensures that children who are admitted for care at Hasbro Children’s remain involved with their school work. With the Department’s invaluable support, our program provides not only educational services – often at a child’s bedside – but a sense of normalcy for when a child is away from school for extended periods. 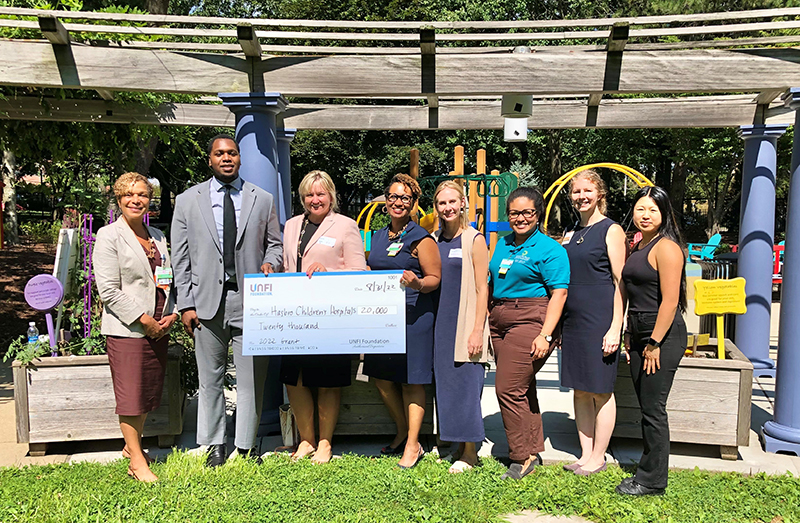 The UNFI Foundation has awarded a grant of $20,000 to support our newly-launched Food is Medicine initiative, which supports families in the Hasbro Children’s Hospital Primary Care Clinics who are struggling with food security.

The Ida Ballou Littlefield Memorial Trust awarded a grant of $10,000 to provide a wide range of sensory integration for hundreds of children needing these supports from across the hospital each year. A portion of the grant will enable us to host speakers and clinical trainings to continue advancing our team’s knowledge of sensory integration and ensure that our patients and families will continue to have the unique and specific supports they need to help calm and soothe.

The Rhode Island Turnpike and Bridge and Bridge Foundation has awarded the hospital with a grant of $3,000 with the proceeds generated from the Citizens Pell Bridge Run. This grant will support the Healing Arts Program.

Hasbro Children’s Hospital has received a $10,000 grant from the Billy Andrade-Brad Faxon Charities for Children to support Healing Arts programming for children in the Medical-Psychiatric Program and Partial Hospital Program.