Cardiac Patient Back at the Altar and On the Ice

Armenian priest Father Gregory Souin led a very active life well into his 40s, playing ice hockey and exercising regularly. In 2007, he started to notice swelling in his ankles, coughing, and an earlier onset of fatigue during exercise. His teammates on his hockey team recommended he see a cardiologist. Despite his overall health and activity level, Father Souin was diagnosed with heart failure and given a pacemaker. After a few years, Father Souin and his physicians realized that it wasn’t working for him; he found it difficult to preach in church and lead his normal life. When he moved to Rhode Island from New Jersey in 2015, Brian Abbott, MD, followed up in Father Souin’s care. 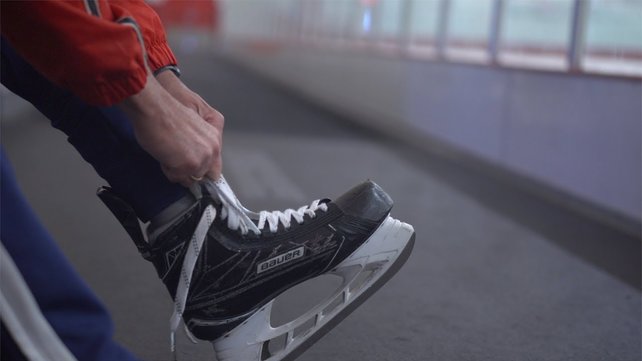 Father Gregory Souin enrolled in the Cardiac Rehabilitation and Cardiopulmonary Maintenance programs at The Miriam Hospital.

One summer day in 2017, after having trouble getting out of his car and into church, Father Souin fainted while giving a sermon due to dehydration, coupled with his heart condition. He was taken to Rhode Island Hospital and treated, but his problems were not over yet.

Only months later, he was admitted again for fluid overload--75 pounds of water was being retained around his heart. Doctors dried him out with diuretics for seven days to remove the fluid. An echocardiogram confirmed that a previous 15% ejection fraction was now at 5%. The ejection fraction (EF) refers to the amount of blood that is pumped out of the heart with each heartbeat; a normal percentage is somewhere between 50 and 75. This prompted Dr. Abbott to refer Father Souin to the Heart Failure Program, transferring his care to Daniel Levine, MD.

“I don’t consider myself a sick person anymore,” says Father Souin. “Every day is a gift.”

It was at this time that heart transplant options needed to be discussed. Lifespan Cardiovascular Institute and Tufts-New England Medical Center coordinate care of heart transplant patients. LCVI prepares the patient in prehab and helps them recover in rehabilitation, while the actual transplant procedure is done at Tufts. Father Souin was transferred to Tufts, where he stayed for five months. A left ventricular assistive device (LVAD) was implanted to replace the function of the heart and to provide temporary support while waiting for his heart transplant. This was unsuccessful, and Father Souin went into cardiac arrest. He was then implanted with a biventricular assistive device (BiVAD). (Only 5.2% of overall VAD implants in the last 10 years required both left- and right-side supportive devices.) After lots of rest, Father Souin was discharged from Tufts to await an available heart.

He enrolled again in the Cardiac Rehabilitation and Cardiopulmonary Maintenance programs at The Miriam Hospital, this time as a heart transplant patient. “Rehab has been awesome. It’s really helping me a lot,” Father Souin says. He has since been able to get back on the ice to play hockey and preach at his church. Father Souin feels better than ever, and is grateful to the physicians and nurses at The Miriam Hospital Cardiac Rehabilitation program and Heart Failure Program at Rhode Island Hospital for ensuring his transition and recovery from Tufts was as smooth as possible. “I don’t consider myself a sick person anymore,” he says. “Every day is a gift.”