Back in those days, as a medical student dreaming of becoming a doctor and a pro racing fan seeking his own thrills at amateur events, he never imagined he’d be able to combine his two passions.

But that’s exactly what he did.  These days, when not tending to patients in the emergency department at Rhode Island Hospital or The Miriam Hospital, Dr. Greve travels the world as a physician for a pro cycling team. And it's not just any team.

Dr. Greve works with Team Novo Nordisk, the only pro cycling team in the world made up exclusively of type 1 diabetics. It's a job that requires not only expert medical knowledge about the disease but also a keen understanding of how cycling affects an athlete whose pancreas produces little or no insulin.

Ever since joining the team in 2006, Greve has been helping to raise awareness of the disease and prove that diabetics can compete at the highest levels of sport.

"A lot of physicians were pretty fearful for this group just because the nature of having type 1 diabetes in a competitive cycling environment was scary," he said. "I saw it as more of an interesting challenge." 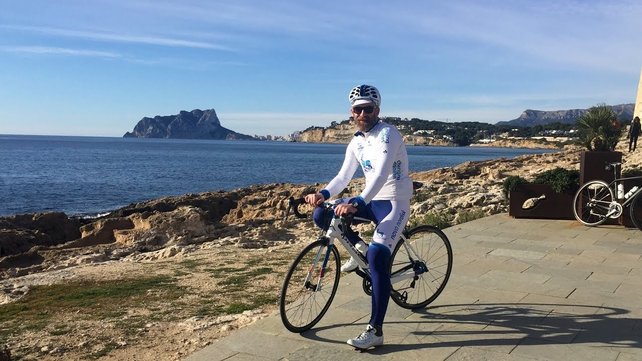 Mark Greve, MD, is an emergency medicine physician at Rhode Island Hospital and The Miriam Hospital. He's also the physician for Team Novo Nordisk, a cycling team for pro riders with diabetes.

The job has taken him to races as far away as Asia, Africa and South America. While being a team doctor at cycling races mostly involves minor injuries and medical issues, things can turn very scary, very quickly. With nearly 200 riders jockeying for position among a caravan of hundreds of cars, one slip can be catastrophic. In the blink of an eye a sleepy bike race can become a mass casualty scene.

Greve has become so familiar with broken clavicles, soft-tissue injuries, and dressing wounds that he's become the global expert on cycling injuries, training other care providers how to manage everything from a tension pneumothorax to exercise-induced anaphylaxis. He was a pioneer in the diagnosis and management of head injuries in cyclists and is currently working with USA Cycling to make bike racing safer.

But the thrust of his work with Team Novo Nordisk has been improving how athletes manage their diabetes and proving that diabetics can push themselves physically.

"There's often two competing forces when managing diabetes. On the one hand, you really want there to be standardization – the same caloric input, the same doses of insulin.  The more variables placed on an individual, the more difficult diabetes can be to manage," said Greve.

Yet when it comes to cycling, such variables are unavoidable, especially when cyclists take part in races that cover 120 miles in a day and demand bursts of power during sprints and steep climbs.

"On the opposite side, we know that exercise does many wonderful things for diabetes. Certainly in type 2 diabetes it can, in many cases, be curative. For type 1 diabetes it absolutely can reduce insulin requirements and improve glycemic control."

His racers typically take a combination of short-and long-acting insulin and rely on continuous glucose monitors to continuously track their blood-sugar levels while training and in competition. The data can be downloaded and studied after a race.

Greve said the team’s athletes have helped inspire others with diabetes.

While at the Tour of California, Greve was watching his team preparing to race when he noticed a mom standing nearby with a boy who was about eight years old. They had turned out on a raw and rainy day and the boy was holding up something in his hands. It was a team photo.

"You knew what that was.  That was a child diagnosed with type 1 diabetes," Greve says.  "The instructions these children receive is about all of the bad things that will happen. You will go blind. You will lose your limbs ...There's no role models for them to say, 'This is someone achieving greatness.’ These guys are really role models for the type 1 diabetes community."