Today, virtually everyone knows of someone who has battled for their life against antibiotic-resistant bacteria. Two well-known examples are MRSA and C. difficile. They have become almost epidemic. It can happen in the blink of an eye, and the life-threatening havoc they wreak knows no bounds. Hospitals are no exception.

Although antibiotic drug discovery takes many years, they are making headway in defining the problem and redefining the approach to battling it successfully.

In addition to threatening the lives of patients, antibiotic-resistant bacteria are threatening the very essence of how physicians practice medicine and how patients benefit from health care. 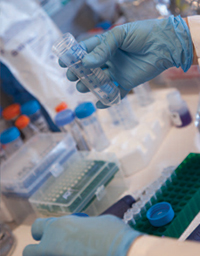 Without effective antibiotics, the whole face of medicine changes, as elective procedures and minor illness can become life-threatening when a patient is infected with resistant bacteria. For instance, the growing prevalence of resistant bacteria increases the risk for lifesaving procedures such as chemotherapy, cardiac bypasses and organ transplants and even for life-enhancing surgeries such as joint replacements and other elective surgeries.

Going to a rehabilitation facility poses the same challenges, along with nursing homes. Anywhere there is a preponderance of ill people, antibiotic resistant bacteria have the opportunity to flourish.

This complex problem can be categorized into three areas of inquiry. How do bacteria become resistant? How does this resistance impact treatment? And what makes these particular bacteria able to cause disease while they are simultaneously fighting the antibiotic?

Typically, researchers look at only one of these questions or study them in isolation. Mylonakis and his team are researching all three questions simultaneously. They can do this because they have changed the battlefield, thanks to an incredible worm—Caenorhabditis elegans.

“About half of the C. elegans worm genes are similar to human genes. There are 20 cells in the intestinal track, and they have microvilli as humans do and their innate immunity has interesting similarities to human immunity,” Mylonakis says.

Since this worm shares many important characteristics with humans, the investigators can test thousands of compounds on a whole organism host rather than in a test tube. By screening the compound in a host, they are simulating the actual infection and immune response process more closely.

“We are screening thousands of compounds a week in our lab. We are trying to find a compound that helps the worms survive longer. The C. elegans worm plays an integral role in our research because it is much harder to develop the immune response in a test tube,” says Mylonakis.

They test the compound by infecting the 1-mm adult worm and then placing it in a tray with the compound. The worms are transparent, so they can be examined with a special microscope to study the compound’s impact. They are looking to do one of three things: inhibit virulence (the strength of the bacteria), weaken the resistance of the bacteria, or strengthen the immune response.

Using precise standards and protocols, the Mylonakis group in close collaboration with the Ausubel group at Harvard University average about five “hits” per thousand compounds tested—that is, about five potential compounds that may warrant further testing and could save lives. This collaboration between the two labs is critical to the project. Mylonakis and his team can determine that a compound is having an impact, but the “why” and the “how” are crucial to success. That’s where Rice and his team come in.

“We can test 4,000 compounds per week per person working on the project, and there are three scientists from our group that work on this project full-time. That is significantly more than you could do in mouse models,” says Mylonakis.

Once they identify promising compounds, they collaborate with the Rice lab for further testing to determine how it is working.

“Most of the naturally occurring products that make antibiotics have been exhausted. We need to find other compounds,” Rice says. “We need to get more sophisticated beyond kill and inhibit. We need to understand how they are working—the mode of action.”

Partnerships are another vital piece helping to solve the puzzle, according to the two researchers. This project is funded by the National Institutes of Health, as well as the pharmaceutical industry, and is part of a larger collaboration between several top laboratories in the area that are working in antimicrobial drug discovery. This kind of collaboration between academics, government and the pharmaceutical industry is important for the future.

To keep our patients safe, healthy and infection-free, Lifespan hospitals are engaged in many programs, procedures and research projects in infection prevention and control, including an aggressive hand hygiene program, special antiseptics for bathing patients, and software for tracking infections in the hospital.

Mylonakis and Rice know there is a long road ahead before their research could help a patient, but that doesn't deter either of them.

“This research has beautiful crossover from basic lab concepts into the beds where the patients are in the next building,” says Rice. “I can look at a lab report and say, ‘I know how it’s doing that…and that…but how’s it doing that?’ I take it to the lab and figure it out."

Mylonakis adds, “The degree of difficulty motivates me. We are trying to make a difference in patients’ lives, create high-paying jobs in our area, and outsmart nature. How could you find anything more challenging than that?"