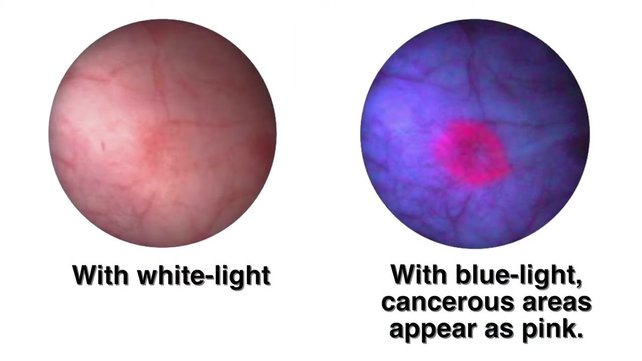 The Miriam Hospital is one of three New England hospitals to use blue-light cystoscopy to diagnose and treat bladder cancer.

For bladder cancer, our treatment therapies include:

Cystoscopy
During a cystoscopy, the patient is sedated and the physician inserts a long thin tube into the bladder without making any incision and uses a bright light to inspect the lining closely for any abnormal growths or suspicious areas that may indicate bladder cancer.

Fulguration
Destruction of diseased tissue by burning with electrical current

Transurethral resection of bladder tumor (TUR BT)
Often the first step in diagnosing, staging and treating visible tumors. The endoscope used to remove the tumor is inserted into the bladder through the urethra. At the end of the scope is a small, electrified loop of wire that is used to cut and remove diseased tissue.

Robot-assisted laparoscopic radical cystectomy
The entire bladder, nearby lymph nodes, part of the urethra, and nearby organs such as the prostate in men and the uterus, ovaries and fallopian tubes in women are removed to eliminate cancer cells.

After this procedure, our surgeon will create a way to eliminate urine:

We work in collaboration with oncologists at the Lifespan Cancer Institute, with the goal of precisely diagnosing and treating prostate, kidney and bladder cancers as soon as possible.

The most common risk factors for bladder cancer include:

The most common symptom of possible bladder cancer is blood in the urine. If you experience this symptom, please contact your doctor immediately.

Read the WPRI story by reporter Alexandra Leslie about the new registry recently created to find out why Rhode Island has such a high incidence rate of bladder cancer.