No matter what he tried – rest, ice, physical therapy – Barrington track and field standout Bobby Colantonio Jr. couldn't get rid of the pain in his leg.

Still, he wouldn't stop giving it all he had in the hammer throw.

Colantonio,  a formidable competitor at 6'3" and 240 pounds, had devoted years to developing the strength and technique to excel at the sport. His hard work was paying off. He was getting invited to prestigious national and international competitions and had accepted an athletic scholarship to sports powerhouse The University of Alabama.

The 2020 Olympics was quickly becoming less a dream and more a realistic goal.

But when Colantonio arrived on the Crimson Tide campus and finally had his leg thoroughly examined, a doctor delivered some completely unexpected results.

"He said it looks like there's a tumor on your femur," says Colantonio. "He told me the best thing to do was to go home and meet an oncologist. He did some research and said one of the best doctors in the United States just happens to be in Rhode Island." 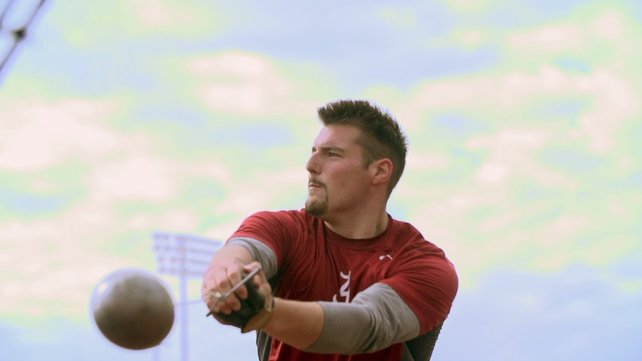 That doctor was Richard Terek, MD, an orthopedic surgeon and musculoskeletal oncologist at Rhode Island Hospital and The Miriam Hospital. He performed an emergency biopsy on Colantonio. The results were devastating: At 18, Colantonio was diagnosed with Ewing's sarcoma, a bone cancer that typically afflicts children. Not only that, it was metastatic, meaning it had spread to other parts of his body.

"It's a pretty rare type of cancer," says pediatric oncologist Bradley DeNardo, MD, who began seeing Colantonio at that point. "There's really only about 200 cases of Ewing's sarcoma in the United States every year. Of those, only about a quarter have spread or metastasized at the time of diagnosis, which was the case for Bobby. He was in a very unfortunate and rare group of cases."

The cancer had spread from his left femur to both hips as well as his lungs.

"When Ewing's sarcoma has not spread, we can cure almost two-thirds of patients," says Dr. DeNardo. "If it has metastasized the way it had with Bobby, then we are able to cure less than a third of patients."

"That hit me so hard," says Colantonio. He thought, "This is reality. This is happening."

Still, he felt he was in good hands.

"They said Hasbro Children's Hospital was the best place to get treatment because it was a childhood disease," says Colantonio.  "I felt safe being there."

Colantonio approached his cancer fight with the same tenacity he brings to sports – along with a remarkable perspective on the significance of numbers.

"When throwing, it's very easy to get caught up in distance.  I want to get to 70 meters.  I want to get to 75 meters ... The more you think about it, they're just numbers. There's no real meaning behind them. There's nothing that can stop you from getting to those numbers," he says. "They said my survival rate is less than 30 percent.  That number is a fact, but it doesn't affect me. I'm still going to make sure I do what I have to do. I'm just going to take every treatment day by day."

The treatment regimen was "intense," says Dr. DeNardo, and "Bobby approached it the way I think he approaches most things in life – just facing it head on. I think that really helped him."

Colantonio underwent close to a year of chemotherapy and other treatment at Hasbro Children's Hospital.

Colantonio endured nearly 12 months of chemotherapy. In addition, he had to have radiation therapy for the bones where the cancer had spread. Surgically removing the primary tumor in his leg was an option, but Colantonio opted for radiation, which offered better prospects for a successful return to competitive hammer throwing.

Colantonio underwent close to a year of chemotherapy and other treatment at Hasbro Children's Hospital.

"He tolerated the treatment in a very amazing way, having minimal side effects," says Dr. DeNardo. "That allowed him to focus on the things that were really important to him – moving forward and returning to athletics, maintaining really good nutrition, not losing a significant amount of weight, and continuing to exercise. That's something that is unheard of for most patients."

Colantonio also took part in a clinical trial of an antibody-based treatment that aims to kill just cancer cells, instead of indiscriminately killing healthy ones too.

"At Hasbro, our pediatric oncology group really prides itself on being able to offer the most cutting-edge, up-to-date cancer treatments available throughout the world," DeNardo says. "We feel we can offer patients the best therapy possible for their specific cancers but also do it in a very personalized way …. which you don't always find at some of the very big cancer institutions."

Colantonio says the amazing care he received at Hasbro Children’s went beyond medicine.

"They showed me so much love and emotion,” he says. “The nurses upstairs on Hasbro 5 are angels."

When his treatment ended in August 2017, Colantonio received good news. His cancer was in remission. But his recovery, he quickly found, was going to take time. One day soon after chemotherapy ended, he tried a few sets of air squats at home. The next day his legs were so sore he had difficulty walking.

It was a far cry from his junior and senior years at Barrington High School. Back then, he was setting state and national throwing records, outperforming many college kids at the USA Track & Field Championships and placing fifth in the under-18 category at the world championships in Columbia.

Following cancer treatment, Colantonio returned to Alabama in the fall of 2017 and began attending classes and training with his team.

"It feels really incredible to be back and actually start my education and start throwing," he says, half way through the academic year.

Colantonio is hoping to get cleared by the NCAA to compete in the winter/spring season of his sophomore year. His practice throws are already farther than before he became ill.  And by his 20 birthday in May 2018, he'd increased to squatting 565 pounds.

"I said no matter what happens, when I'm done (with treatment), I'm going to come back and I'm going to make an Olympic team," he said. "I still think I can make a very good attempt to make it in 2020."